Slack (NYSE:WORK) has a thorn in its side, and its name is Microsoft (NASDAQ:MSFT). Despite pioneering its niche in the tech industry, Slack's platform is facing tough competition from Microsoft's Teams, which has surpassed the former in terms of subscribers.

Still, Slack is far from dead in the water, and the company proved as much with its latest earnings report released on Dec. 4. Let's see how the San Francisco-based company performed during the quarter and whether it will be able to compete with Microsoft moving forward.

Slack's third-quarter earnings report was strong. The company had about 105,000 paid customers at the end of the period, a 30% year-over-year increase. And of these 105,000 paid customers, 821 generate annual recurring revenue of more than $100,000 -- a 67% jump compared to the year-ago period -- and more than 50 were paid customers with greater than $1 million in annual recurring revenue. As Slack's subscriber count keeps climbing, so does its revenue: The company's top line for the quarter was $168.7 million, a whopping increase of 60% year over year. 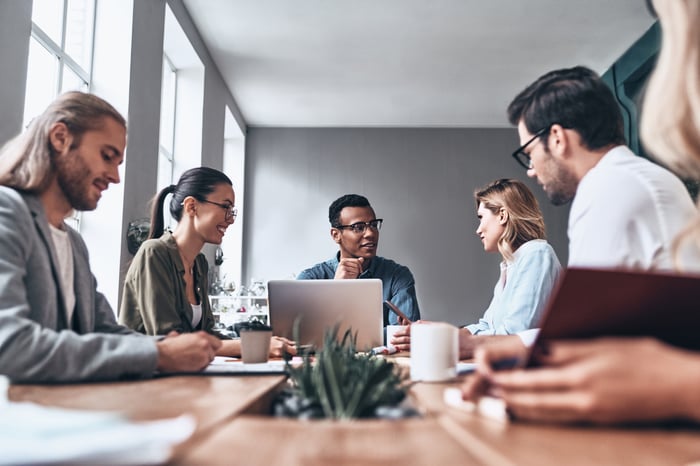 Furthermore, Slack boasts a solid gross margin. For the quarter, its GAAP gross margin was 86.3%, although that represented a decrease of about one percentage point from the prior-year period. The company remains unprofitable, though it is rapidly approaching break-even with a non-GAAP net loss of just $0.02 per share.

If Slack's top line can continue increasing at such a rapid pace, growth-oriented investors might be inclined to ignore the red ink on the bottom line, at least for now.

What about the competition from Microsoft?

Despite Slack's growth, investors might be skeptical of the company's future because of the competition from Microsoft's Teams. However, Slack's management apparently doesn't share that sentiment. During the third-quarter earnings call, Slack CEO Stewart Butterfield had this to say about the competition:

Although Microsoft markets Teams as a Slack competitor, and there's no doubt this causes confusion in the marketplace, in practice, these are different tools, used for different purposes, and our customers achieve markedly different results. Just look at the weak engagement numbers that Microsoft themselves reported about Teams and the much deeper level of engagement you see among Slack users. Slack represents a new category of software.

Butterfield also said that many of the company's customers (about 70%) use part of Microsoft's Office Suite but choose to forgo Microsoft's Teams in favor of Slack's platform. In other words, the company has little to fear from Teams moving forward.

What, then, is the reason Teams has so many users? Many of Teams' users are simply migrants from Skype Business, a service that exceeds 100 million users. Thus, it wouldn't be surprising if Teams itself reached that many subscribers in the not-so-distant future, but that need not be cause for concern for Slack's shareholders since Slack and Teams are fundamentally different products, at least according to Butterfield.

If this is correct, competition from Microsoft isn't that much of a headwind for Slack after all, and given the company's growing subscriber count and soaring revenue, the future looks bright for this young company.