Slack (NYSE:WORK) was one of the many highly-anticipated IPOs in 2019, and like several of its peers making their debut on the stock market, the company hasn't performed nearly as well as expected.

Slack's shares surged to $42 (up from its initial offering price of $26) during its first day of trading, but they've been on a solid downward spiral since June. One of the reasons behind Slack's lackluster performance has been stiff competition from a rival platform owned by Microsoft (NASDAQ:MSFT). And unfortunately for Slack, this showdown between the two companies is only heating up. 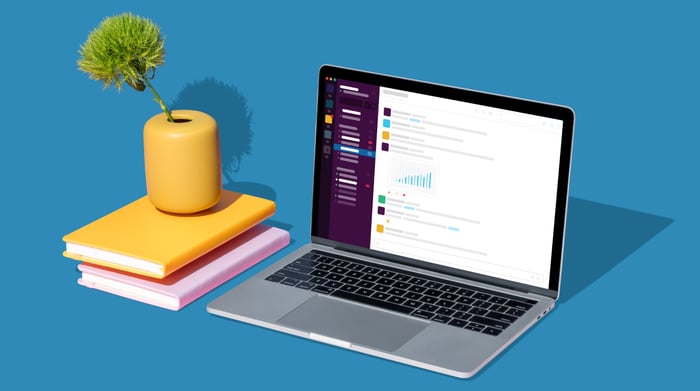 In a lengthy blog post on its website on Nov. 19, Microsoft boasted about the number of users its Teams platform has managed to amass in a mere two years, as well as the engagement these users have on the platform. It's worth quoting the company at length:

Today, Teams has more than 20 million daily active users. What's more, while these users start with simple text-based chat, they quickly move on to richer forms of communication and collaboration. For instance, last month, Teams customers participated in more than 27 million voice or video meetings and performed over 220 million open, edit, or download actions on files stored in Teams.

It isn't the first time Microsoft has made such an announcement; back in July, the company claimed that Teams had over 13 million daily active users (DAUs), which means that number skyrocketed over 50% in a mere four months. Obviously, this poses problems for Slack, which recently reported 12 million DAUs on its platform, fewer than what Microsoft's Teams had even in July, nevermind now. This is despite Slack being a bit of a pioneer in this niche and getting a serious head start on Teams (Slack was originally founded in 2009).

According to Slack, investors shouldn't focus solely on DAUs as, in the company's own words, "Not all daily active users are created equal." What does this mean? First, Slack argues that its community of registered developers -- who help fine-tune the platform to meet the wide array of needs its users have -- bring a unique flavor to the platform that is unlike what any of its competitors offer. Slack has more than 1,800 custom apps on its platform that help boost its functionality.

Second, Slack had over 100,000 paid customers at the end of its latest reported quarter, the second quarter of fiscal 2019, and besides the fact that this is a great source of recurring revenue, these customers are helping drive engagement on Slack to new heights. Paying customers on Slack are connected to the platform for an average of nine hours a day and spend 90 minutes actively using it.

Slack's strong ecosystem is one of the main reasons behind the company's ability to grow its revenue at such an impressive pace. During the second quarter, revenue was $145 million, a 58% increase year over year. Looking ahead, the midpoint of the company's revenue guidance for the third quarter would represent a 47% increase over the year-ago period. Still, Slack is currently unprofitable, and it is unclear whether the company will achieve profitability anytime soon. That isn't too much of a problem as long as it continues to grow its top line at a frenetic pace, but with competition from Microsoft's Teams getting increasingly stiffer, Slack's revenue growth could decelerate.

Lastly, Slack is richly valued and currently trades at 23 times trailing revenue. Although double-digit gains and high valuation multiples are typical of growth stocks, Slack hasn't exactly behaved like one, given its trading history.

Slack could certainly come out on top in its battle against Microsoft, but it might be best to watch how things develop from afar before jumping aboard this ship.