Shares of Oceaneering International (NYSE:OII) jumped 10% out of the gate Thursday morning, after the maker of remotely operated vehicles (ROVs -- deep-sea submersible robots) received its third buy rating in a month from a Wall Street firm.

Last month, Merrill Lynch and Wolfe Research initiated coverage of Oceaneering stock with buy-equivalent ratings and price targets of $17 and $18, respectively. (Oceaneering stock is selling for $14.59 per share as of 10:30 a.m., off its earlier high but still up 8.3%).

Today, it's Evercore ISI jumping on board with an upgrade from "in line" to "outperform." 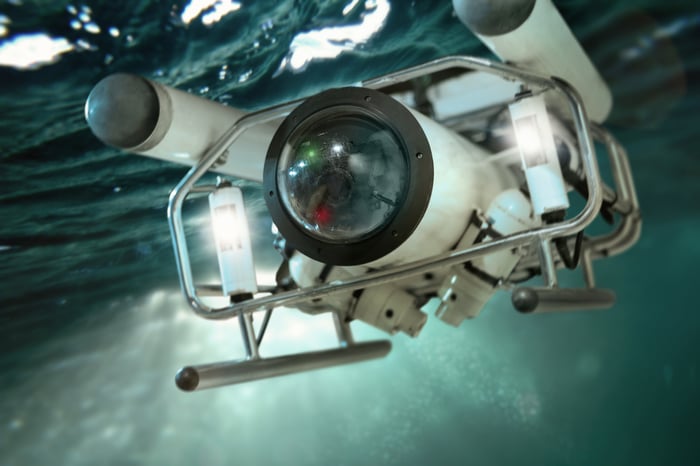 No one seems to have details on what precisely prompted Evercore to upgrade Oceaneering this morning, but last month's upgrades may hold a clue or two.

On November 12, TheFly.com reported that Merrill Lynch was enthusiastic that after a long period of decline, "floating [oil] rig demand" in the energy sector would grow in the "high single-digits" in 2020. Because Oceaneering's ROVs are used to monitor the underwater health of such rigs and the wells they drill, such a return to growth for Oceaneering's customers would likely benefit Oceaneering itself.

About a week later, Wolfe Research chimed in with a note agreeing that offshore drilling is poised to grow and calling ROVs a "defensible niche" for Oceaneering.

For a company that's missed its earnings estimates (badly) twice in a row in the last two quarters, where sales and earnings are both trending negative and the stock is down 12% over the past year, this is all good news -- if the upgrades are justified.

Meanwhile, most analysts who follow Oceaneering International stock are still predicting a money-losing end to 2019 -- and another loss in 2020. For today's stock price gains to hold, those predictions are going to have to get debunked, and the sooner the better.