About a year ago, The Children's Place (NASDAQ:PLCE) looked like one of the best retailers in the industry. In the company's third-quarter 2018 earnings report, it revealed that its comparable sales had jumped by 9.5%; its stock price had tripled in the prior three years; and its chief rival, Gymboree, was on its way to bankruptcy.

Since then, however, the niche apparel retailer's story has unraveled. The liquidation of Gymboree put pressure on Children's Place's sales in the first half of 2019, and the company's most recent report makes it clear that it faces further challenges, including declining mall traffic and a sales environment conducive to price promotions.

The stock is now worth just a third of what it was at its peak last fall and is trading at its lowest point in four years. Children's Place is still solidly profitable, but the company is at a crossroads as it prepares to relaunch the Gymboree brand, which it bought out of bankruptcy. With shares down so sharply, investors may wonder if this is a buying opportunity or if there are further declines to come. Let's take a look at where the retailer stands today, and where it appears to be going following its Q3 earnings report. 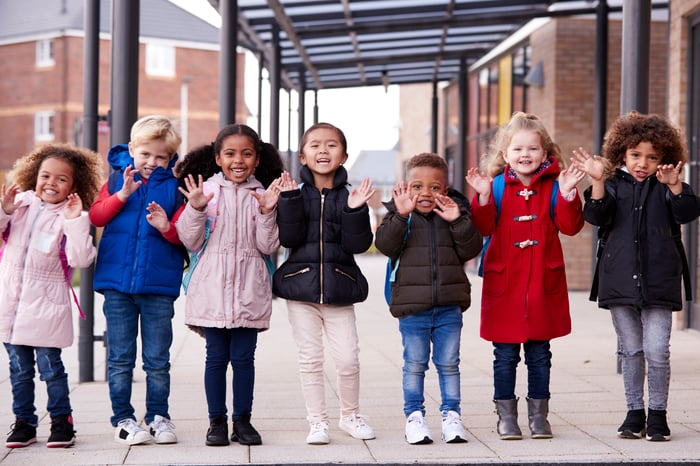 Children's Place has highlighted a number of challenges it's facing in its latest quarter. Management asserted that warmer-than-usual fall weather across the U.S. led to weaker sales in Q3 -- an excuse also provided by other struggling apparel players like Macy's and DSW-parent Designer Brands. Weather-related troubles should be temporary, but what was more concerning is that the company expects comparable sales for Q4 to drop by a mid-single-digit percentage in large part due to declining mall traffic.

On the earnings call, CEO Jane Elfers noted a trend of customer traffic shifting to "off-mall value retailers" and added, "Mall-based department store anchors are not driving nearly the same levels of traffic to traditional malls through November as the big box retailers have been able to do." Investors have seen this trend reflected in earlier earnings reports as Macy's delivered weak results, noting poor performance in lower-end Class C and D malls. Meanwhile, off-mall retailers like Target (NYSE:TGT) and TJX Companies, which owns TJ Maxx and Marshall's, posted strong results last quarter. Target, in particular, is gaining momentum in apparel with double-digit-percentage comparable sales growth in the category. It has also made baby and kids two of its four "signature" categories, a sign that it's likely to continue its efforts to take market share from Children's Place and other mall-based retailers.

Declining mall traffic is a clear challenge for Children's Place, and one it can do little to change, but it's also been adapting itself to this shift in consumer behavior for several years. It rationalized its store base and has grown its e-commerce business into a segment that now produces 35% of its sales. If mall traffic continues to fall faster than expected, management will close more stores and shift more of the company's resources to e-commerce.

"We're armed with meaningful flexibility in our real estate portfolio, with an average lease term of 2.5 years and with approximately 1,000 lease events pending in the next few years," said CFO Mike Scarpa, "which leaves us nimble and well-equipped to close additional doors in response to the outsized growth we're seeing in our digital business."

However, despite the fact that there is a plan, investors don't seem fully convinced it's an adequate one, and the guidance for comparable sales decline underscores the fact that declining mall traffic will put pressure on this company in other ways.

Elfers spent much of the earnings call talking up the Gymboree relaunch that's coming early next year. This will include opening Gymboree-branded store-within-a-store locations at more than 200 Children's Places and reviving the Gymboree.com e-commerce site. She said a recent media event garnered overwhelmingly positive feedback for the brand and its products, and that Gymboree customers remain "fiercely loyal" to it. Management sees a number of opportunities to capitalize on the acquisition, including adding Gymboree's customers to its loyalty program. Children's Place is opening 25 stores in high-performing former Gymboree markets where it doesn't currently have a location.

Though Gymboree was forced into bankruptcy, that was largely due to its debt burden and heavy interest expenses -- the core business was profitable. In the fiscal year that ended January 2016, its last full fiscal year before it filed for its first bankruptcy in 2017, the company had revenue of $1.25 billion and an operating income of $42 million.

Elfers didn't provide any numbers related to the Gymboree launch, but even if it only garners a fraction of the chain's prior sales, that would help Children's Place deliver growth next year and reframe its story.

It's clear why Children's Place stock plunged after the recent earnings report, and given the warning about declining mall traffic, it's unclear whether the stock now offers real value or if it's turning into a value trap. The Gymboree relaunch seems promising, but with comparable sales on track to decline in the holiday quarter, this company has a lot of work ahead of it if it's going to drive its share price back toward its former heights.