Foot Locker (NYSE:FL) is a leading multibrand retailer of sports apparel. The company sells clothing, footwear, and kids' clothing from a variety of suppliers, including global names such as Nike (NYSE:NKE), adidas, Under Armour, and Puma.

Foot Locker has always promoted its wide range of available brands as a strong reason for shoppers to visit its stores. The company also champions "youth culture" and is investing in technology, brands, and platforms to engage the young in order to keep them coming back. However, can the company chart a consistent growth path? Or would investors be better off buying shares of Nike -- which owns its own stable of brands and has a design and manufacturing team -- instead?

Let's take a look at several characteristics of Foot Locker to determine whether it can sustain steady growth. 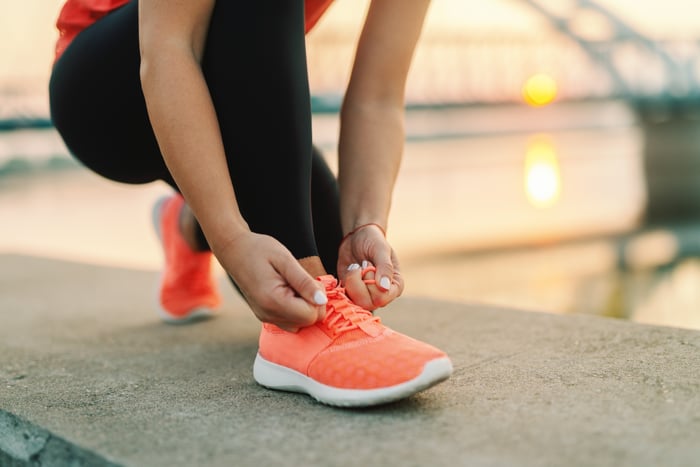 In Foot Locker's 2018 10-K report, the company mentions that it purchases around 90% of its merchandise from just five suppliers and foresees that this trend will continue. In fact, around 66% of its purchases were from a single supplier: Nike. This heavy reliance on just a few core brands is risky, as Porter's Five Forces Framework defines this scenario as being one of strong supplier power.

If supplier power is strong, this means that the customer (i.e., Foot Locker) will be in a weaker position to negotiate for bulk discounts or preferential pricing. There is also a risk of the suppliers shifting to other retailers or distributors in order to diversify their customer bases, which would have a detrimental impact on Foot Locker.

A glance at Foot Locker's financial performance over the last five fiscal years shows a steady trend of rising revenue, from $7.17 billion in FY 2014 to $7.94 billion in FY 2018. However, gross profit has not risen in tandem with revenue; gross margin contracted from a peak of 33.9% in FY 2016 to 31.8% in FY 2018. This might have something to do with the company being unable to price its products competitively even as it comes under pressure from its stable of suppliers. 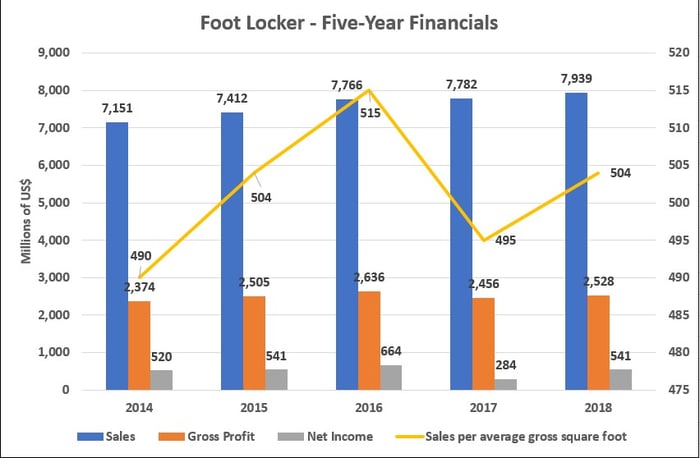 GAAP net income shows a similar erratic trend. Even after adjusting the FY 2017 net income by adding back one-off impairment, litigation, and restructuring-related charges, adjusted net income would have been $510 million. Foot Locker's net margin was 6.8% in FY 2018, down from a high of 8.6% in FY 2016.

If we look at Nike's gross margin, it stood around 40% for fiscal year 2019, against Foot Locker's 31.8% for FY 2018. In the more recent Q3 2019 earnings from Foot Locker, gross margin only improved marginally to 32.1%. The gap between the rivals is significant, as it allows more wiggle room for Nike to spend on customer acquisition and marketing.

Nike and other brand owners such as adidas and Puma are also opening more stores around the world. This could attract customers to buy directly from the brands rather than from multibrand retailers. The breadth and depth of products are generally more comprehensive in a Nike-branded store than in a multibrand location such as Foot Locker, which has room for fewer offerings of each brand.

Profit and store growth in doubt

On Foot Locker's Q3 2019 conference call, CEO Richard Johnson mentioned some of the company's strategic imperatives such as Lace Up, as well as in-house incubator Greenhouse (including a partnership with NTWRK). The former is a communication and learning platform for associates, designed to free up more time for customer engagement. The latter is an initiative to develop new ideas and partnerships to stay connected with youth culture.

Though these initiatives sound promising, I feel that the likelihood of future profit and store growth are still in doubt. The company is spending on great ideas, but the nature of its business makes it tough for Foot Locker to post consistent profit growth. However, investors can still take comfort in the fact that the company can act as a great dividend stock; it pays out a quarterly dividend of $0.38, giving its shares a dividend yield of around 4.1%.