As the year comes to a close, income investors are thinking about more than just the upcoming holidays and New Year's Eve parties. They also have their dividend stocks in mind, since many publicly traded companies declare raises around this time.

In that spirit, here are three dividend stocks that are about to make their shareholders slightly more wealthy. Two, by the way, are Dividend Aristocrats, meaning that they're S&P 500 components that have lifted their payouts at least once per year for a minimum of 25 years in a row. 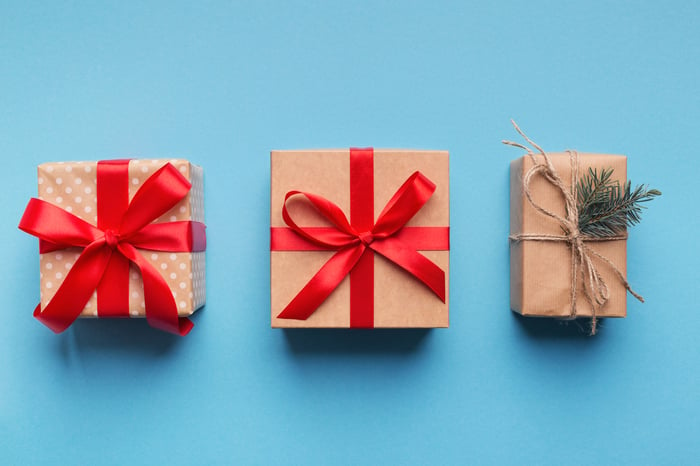 The best stock lurking in your spice rack, McCormick (NYSE:MKC), is one of those two Dividend Aristocrats. Several weeks ago, the company maintained that status by declaring this year's hike to its quarterly distribution of 9% to $0.62 per share.

Consumers in the U.S. and in various other spots around the world are trying to eat healthier, and this trend has been McCormick's friend. Let's face it: The healthier meal option is often the less-tasty one. An effective and relatively easy way to crank up the flavor is by generous use of spices.

As a mainstay in the spice section of nearly every major U.S. supermarket, the company benefits commensurately. Both the top and bottom lines have been rising, and in McCormick's latest set of quarterly results, the company raised its guidance for a current fiscal-year net profit -- which, on an adjusted per-share basis, is now expected to climb by a minimum of almost 5% year over year.

McCormick's freshly lifted dividend will be paid on Jan. 13 to stockholders of record as of Dec. 31. At the most recent closing stock price, it would yield 1.5%.

Raiser No. 2 on our list is AbbVie (NYSE:ABBV), one of the small number of pharmaceutical stocks on the Dividend Aristocrats roster. Last month the company declared that its upcoming quarterly dividend will be $1.18 per share, for a 10% increase.

This was a blast of good news in a year that hasn't seen a lot of it for AbbVie. A big reason for the unpopularity of its stock through much of 2019 relates to Humira. The anti-inflammation drug has not only been the star of AbbVie's product lineup, it's also the most popular medication in the world. But it's at the point in its life cycle when biosimilars are cropping up (in Europe, anyway), so its luster for Abbvie investors is fading.

But Humira biosimilars won't be introduced in the U.S. for a few years yet, so AbbVie's current cash cow is hanging on (its global sales slumped only 3.7% year over year in the company's Q3). Meanwhile, earlier this year AbbVie bought another blockbuster drug, Botox, when it struck a deal to acquire its maker Allergan. It also has several treatments with good market potential in its pipeline.

In spite of a recent rebound, AbbVie's share price is under water, having recorded a nearly 6% decline so far this year. But the combination of a weakened price and cash flow strong enough to pay healthy dividends means a very high yield. AbbVie's new payout, which is to be dispensed Feb. 14 to investors of record as of Jan. 15, would yield 5.4% at the current stock price.

Here's a dividend stock that's probably hanging out in your wallet or purse as we speak: Mastercard (NYSE:MA). The payment card giant isn't a Dividend Aristocrat (at least not yet), but it does have a fine track record of making annual raises to its quarterly payout. The 2019 model is a chunky 21% lift to $0.40 per share. This accompanies an $8 billion share repurchase program concurrently announced by the company.

We're past the midway point on the War on Cash, and there's little doubt which side will win. For years, Mastercard and its peer card incumbents have been reaping the benefits of the increasing use of noncash means of payment from consumers. It's simply more convenient at the register to make a purchase by whipping out a card or waving a smartphone (Mastercard is deeply involved in digital payments, too).

This is a major reason card giants have been raking it in for years, while posting double-digit growth numbers that would be the envy of many business sectors. Mastercard's Q3 results are typical: 12% year-over-year growth in revenue, adjusted per-share earnings up 18%, and an operating profit margin approaching 60%.

Investors know very well that Mastercard is going to be quite the victor in the War on Cash, so it's no surprise they've pushed the share price up considerably (it's risen almost 55% in 2019 alone). Although the company is a very steady and reliable dividend payer, even with that 21% raise, the payout will have a relatively thin yield at 0.6%.