Best Buy's (NYSE:BBY) stock has been on a roll, rising 110% over the last five years, more than double the S&P 500, despite confronting stiff price competition from heavyweights such as Walmart, Target, and Amazon.com. How has the company been able to defy the curse that has impacted many other retailers going up against these big rivals?

One answer is that Best Buy continues to watch costs while pursuing growth, exceeding its $600 million annual cost reduction target earlier this year and beating its timeline by more than a year. With the company already achieving more than $2 billion in savings over the last seven years, management outlined a new $1 billion goal that it expects to reach in five years.

But Best Buy also has other ways that it's defying the retail curse. 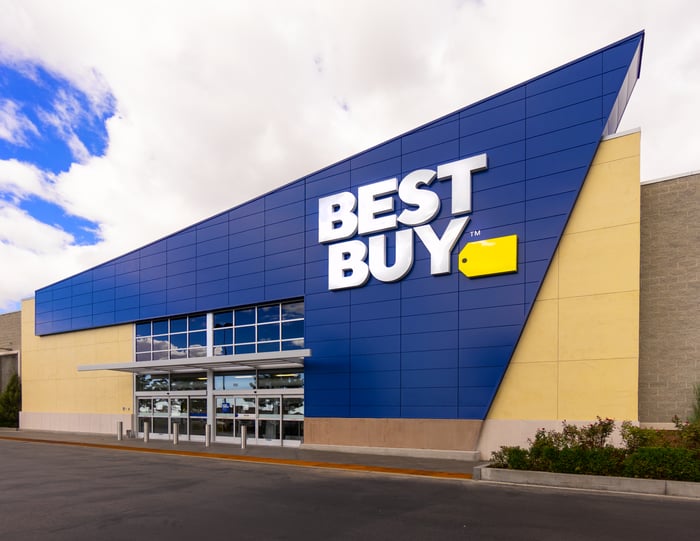 Best Buy has been offering customers a host of services, ranging from consultation and installation to technical support, in order to gain and keep customers. The company, with annual positive comparable sales going back to fiscal 2014, is clearly doing something right. For fiscal third-quarter 2020, comps increased by 1.7%.

Last year, the company launched its Total Tech Support program. The roughly $200 annual fee provides members with unlimited tech support from Best Buy's "Geek Squad," along with discount pricing on things like installation and repairs. Judging by the sign-ups, with membership increasing tenfold, from 200,000 customers when the company started the service in May 2018 to 2 million, people seem to like the offering.

Management is also expanding its In-Home Advisors initiative. This is a free service the company provides where consultants visit someone's home and make recommendations on products such as home theaters, appliances, and smart-home devices.

This raises the question: Why would Best Buy initiate and expand a free service -- from 300 advisors at the start of 2019 to the current 720? After all, this raises its expenses, and the company makes additional time and financial commitments to train the advisors. The answer is that the company has found that customers who use this service spend more and generate more profit than other Best Buy customers. This service also allows the company to build relationships that help to retain customers.

Best Buy provides a personalized service, particularly to novices and those who do not have the time or inclination to learn about the technologies. There is also the potential for repeat orders since the advisors have a chance to build a relationship.

Management has also been streamlining the company's supply chain to allow quicker delivery to its customers. This is a core piece of its omnichannel approach. Currently, 99% of Best Buy's customers live in an area where they can get free next-day delivery, up from only 80% at the end of the second quarter.

Better yet, the company is pushing toward a same-day delivery model, already offering it in many markets. You can also order goods online for pickup at the store within an hour. In an attempt to stay ahead of the competition, Best Buy is also rolling out curbside pickup in New York and some other markets, which allows customers to order merchandise and stay in their cars as Best Buy employees bring their ordered products to them.

The results speak loudly. Domestic online sales jumped 15% year over year in the third quarter. With better sales and lower expenses, Best Buy's third-quarter operating income grew by nearly 23% from the prior year.

Healthcare is another cornerstone of management's strategy. The company has been acquiring companies, such as last year's $800 million GreatCall deal and two smaller deals this year totaling $145 million. These are aimed at providing technology to senior citizens to allow them to live in their homes.

Best Buy is attempting to capitalize on a fast-growing demographic. The number of Americans aged 65 or older is expected to more than double over the next four decades, according to the Census Bureau.

While healthcare currently makes up only a small part of Best Buy's overall business, it's a potentially high-growth opportunity. However, it's a somewhat risky bet since the company's management doesn't have much expertise in the sector. But building the business methodically through acquisitions should allow Best Buy to gain the needed knowledge.

Best Buy has shared the fruits of its success with shareholders in a couple of different ways. The company has increased its dividend annually since 2014. It has also repurchased shares, including spending nearly $700 million on stock buybacks this fiscal year, making the remaining shares more valuable.

Investing in consumer discretionary stocks isn't for the faint of heart given the intense competition in the retail industry. But with Best Buy's reasonable price-to-earnings (P/E) ratio of 15 compared to 24 for the S&P 500, its solid execution, as well as its history of increasing dividends and astute share buybacks, investors should find that the company's shares are a rewarding gift during the holiday season.