Forget the "summer of seltzer" -- 2019 is sure to be remembered as the year of seltzer for the beer industry. Things have gotten so bad that Molson Coors (NYSE:TAP) doesn't want to be called a brewer anymore and Boston Beer (NYSE:SAM) now makes more hard seltzer than it does beer. But there's good reason: Hard seltzer continues to grow at triple-digit rates while beer is down or at best flat most years.

Data from industry research firm The IWSR shows seltzer now accounts for 2.6% of all alcoholic beverages in the U.S. and it's already bigger than vodka. By 2023, it expects hard seltzer production to triple again from 82.5 million 9-liter cases to over 281 million cases.

That sort of growth is why many analysts believe hard seltzer isn't just a fad, but rather a trend. And as Boston Beer commits more resources to it, it's hoping it stays that way. 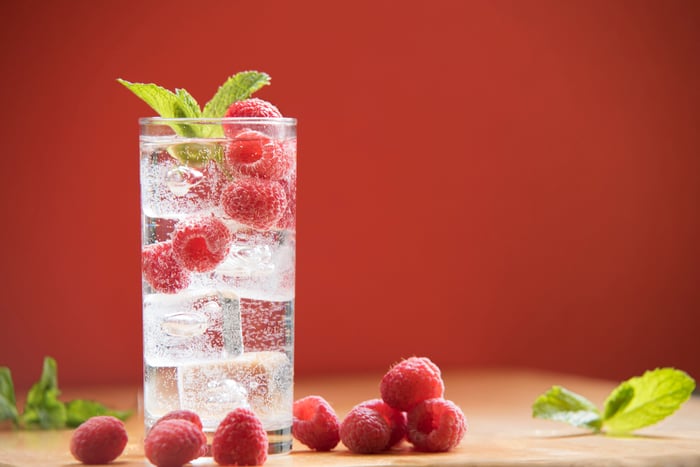 Beer taking a back seat

Beer remains the most popular alcoholic beverage for adult Americans. In its annual alcohol consumption poll, Gallup found beer was tops at 38% followed not too far behind by wine at 30%. Spirits came in a close third, though, at 29%, and it's growing fast. A year ago, preferences stood at 42%, 34%, and 19%, respectively, meaning spirits -- and in particular, whiskey -- was stealing share from both beer and wine.

With the rise of seltzer, though, Gallup may need to include flavored malt beverages to suss out preference nuances, as drinkers don't think of seltzers as either beer or wine.

But for all that growth, just two brands own the hard seltzer market: Marc Anthony Brands' White Claw, with about a 55% share, and Boston Beer's Truly, with a 30% share. And sales are surging.

White Claw expects to notch $1.5 billion in sales this year, with its market share growing to 60%. To put those sales in perspective, the biggest, most popular style of craft beer, India Pale Ale (IPA), had trailing 12-month sales of $1.5 billion, according to Nielsen.

A tsunami of seltzer

Yet as the summer of seltzer turns into the fall, winter, and spring of seltzer, the market is being flooded with new brands.

Anheuser-Busch InBev (NYSE:BUD), for example, is ready to launch its third version of seltzer to make sure it can capture drinkers at every price point, and Molson's MillerCoors division is looking to introduce its second brand. It already has Henry's Hard Sparkling, but it's set to launch Vizzy, a seltzer loaded with antioxidants to capture the health and wellness trend that's reportedly behind hard seltzer's popularity.

The market might be able to support them, too. There were widespread shortages of White Claw this summer that's had Mark Anthony Brands shuffling supply and leading it to invest in more capacity. And while Truly hasn't been hard to find, Boston Beer is also betting big on seltzer's staying power.

In Boston Beer's third-quarter earnings conference call with analysts, president and CEO David Burwick noted the brewer was operating at peak capacity for months to keep up with demand. It is adding a new can line at its Pennsylvania brewery to maintain production as well as pushing its third-party contract brewers to allocate ever more capacity to producing seltzer.

While the brewer has eased back its capital expenditures this year to $100 million-$110 million, it says next year could be as high as $115 million and possibly "significantly higher" if volume growth demands it.

After years of falling depletions, or shipments to distributors and retailers, an industry proxy for consumer demand, Boston Beer is now enjoying double-digit growth rates. It also just increased its depletion outlook for 2020, expecting high-teen to low-20% run rates, along with higher operating income.

While not everyone is convinced hard seltzer is here to stay, believing that fickle drinkers will be on to the next new thing soon enough, The IWSR's COO Brandy Rand isn't one of them, saying in a statement, "Hard seltzers are far from a fad, they're growing at a spectacular rate...making it the fastest-growing beverage alcohol category in the U.S. over the next five years."

Considering the investments Boston Beer is making in capacity and the returns it is generating as a result, it is also hoping hard seltzer is a trend that is with us for some time to come.