The stock market has had an exceptionally good year in 2019, with many major market benchmarks rising 20% or more. The Dow Jones Industrial Average (DJINDICES:^DJI) has set new record highs on several occasions this year, and it's on pace to have its best year since 2013. An abrupt about-face in interest rate movements and generally positive economic performance have helped power stocks higher, defying the fears that many investors had at the end of 2018.

When stock market indexes do extremely well, it can be tough for more conservative investing strategies to keep up. 2019 has been a tough year for the Dogs of the Dow strategy, which seeks to focus on top dividend stocks within the Dow Jones Industrials. With the year drawing to a close, it's almost certain that the Dogs of the Dow won't be able to match up to the performance of the entire benchmark. We'll look at a few reasons why below.

Performance: Dow vs. Dogs of the Dow

Data source: Dogsofthedow.com. As of Dec. 16.

How the Dogs of the Dow work

To understand the relative underperformance of the Dogs of the Dow in 2019, you should know how the Dogs got picked at the beginning of the year. The strategy's simplicity is one of its biggest selling points, as all you have to do is to rank the 30 component stocks of the Dow Jones Industrials by dividend yield at the beginning of the year. Pick the 10 highest-yielding stocks and then hold them throughout the year. 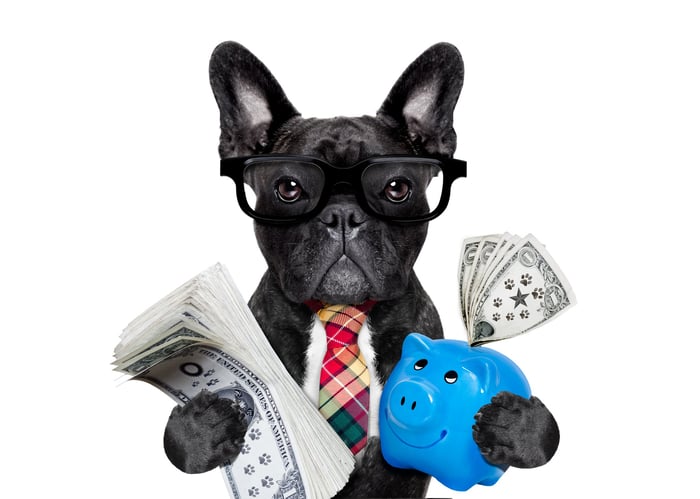 Because of its emphasis on high-yield dividend stocks, the Dogs of the Dow strategy has a reputation for being somewhat defensive. As we'll see, that doesn't always work out well when the market is sharply higher, as it's often growth stocks that lead the way upward.

What's holding the Dogs at bay?

The most obvious reason for the underperformance of the Dogs of the Dow is that the strategy left out what have turned out to be the strongest players in the technology industry. Specifically, the Dogs left out high-flying Apple and Microsoft but included slower growing IBM and Cisco Systems. The average performance of the first pair of stocks is more than 50 percentage points above the average of the second pair, and that dug a big hole for the Dogs.

In addition, the Dogs have high concentrations of sectors that have done relatively poorly so far in 2019. With two major pharmaceutical stocks among their ranks, the Dogs have had to deal with sluggish performance among top pharma companies. Similarly, energy stocks haven't done particularly well this year, yet both of the Dow's integrated oil majors were among the Dogs of the Dow for the year. Meanwhile, strong performance from retail has been highly underrepresented in the list of Dogs for 2019, further holding it back.

Are the Dogs of the Dow dead?

Some investors will point to 2019's poor performance as evidence that investors shouldn't follow the Dogs of the Dow. Indeed, the Dow's victory over the Dogs will mark the second time in three years that the Dogs haven't been able to get the upper hand.

Yet it's interesting to see that 2017 looked a lot like 2019 in terms of how the overall market did. A 25% rise for the Dow proved impossible for the Dogs to keep up with, and Dogs investors had to settle for a 19% gain instead.

Over longer periods of time, however, the Dogs of the Dow have done a good job keeping up with the Dow. Given how simple the strategy is in identifying the Dow's top dividend stocks, though, you don't have to be able to outperform the venerable market average to make the Dogs of the Dow a worthwhile way to get the portfolio income you need.