When Walt Disney (NYSE:DIS) spent $4 billion buying Lucasfilm in October 2012, it spent that money in order to acquire the rights to Star Wars. Yes, the company also got Indiana Jones and some other secondary characters, but it was Luke Skywalker, Darth Vader, and the rest of that fabled franchise that made the deal happen.

Early results of the purchase have been mostly strong, led by the first two films in the third trilogy of what has become known as the Skywalker saga. Star Wars: The Force Awakens earned over $2 billion at the box office, while its sequel took in $1.3 billion. That sets the table for Dec. 20's release of Star Wars: The Rise of Skywalker, which Disney has said will end the story the began in 1977's Star Wars: A New Hope.

The supposed end of the story of the Skywalker family represents a huge risk for Walt Disney. It puts the franchise at a bit of a crossroads and, in some ways, puts the company's investment at risk. 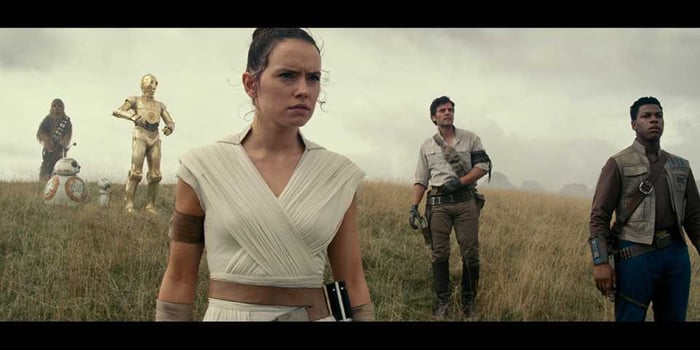 Star Wars: The Rise of Skywalker has promised to close the series. Image source: Walt Disney.

What has Disney done?

When Disney bought Star Wars, it reset what was considered canon in the universe of books that extended the story of the movies. In those books, Luke Skywalker went on to have a family, as did Han Solo and Leia Organa. Those kids, along with their parents, became the focus of the now-defunct expanded universe, which offered enough storyline for dozens of films.

In abandoning those stories, Disney made the franchise more accessible to casual fans. That made sense, but the company could have opted to bring back many of the storylines from the books that are now non-canon (meaning that in the world of the movies, they don't count).

With the trilogy that ends with The Rise of Skywalker, Disney has effectively killed off many of those potential storylines along with some classic characters. That may make for good storytelling, but it's probably not a great long-term business decision.

That decision could affect the company's $4 billion investment. The next Star Wars film has not been announced, but when it arrives it will be a much riskier proposition than a new trilogy that takes place with characters the audience knows some time after The Rise of Skywalker.

How risky is it?

Star Wars has a huge fan base and a lot of established mythology. Disney has shown that it can tell stories not related to the core trilogy with the success of The Mandalorian on Disney+.

Launching a series on an inexpensive streaming service is not the same as creating movies that earn $1 billion (or double that) at the box office. Disney plans to continue using the Star Wars universe in films, but when it does it will be telling stories that stand apart from much of the established lore.

Whatever Disney does, it's a gamble. The next film in the series will probably revolve around new characters (even if they have some familiar trappings). It's reasonable to think that consumers will sample the next film but won't have the same hunger to know what happens to familiar characters that will drive ticket sales for The Rise of Skywalker.

Disney will continue to make money from the Star Wars franchise even if the next films fail. Killing off popular characters and ending the original saga, however, represents a major risk. Star Wars has been a billion-dollar box office guarantee, and Disney has walked away from that. This bet could pay off if the next film delivers a new saga the public wants to follow ... but that's a huge unknown.