Gene editing is easily one of the most exciting areas in the biotech landscape right now. Promising to offer treatments for conditions previously written off as incurable, gene-editing technology has the potential not only to help millions of people get better but also to make billions in revenue for the companies working in this space.

While gene-editing treatments are still in the early stages of clinical testing, a handful of companies are considered front-runners in the emerging sector. Editas Medicine (NASDAQ:EDIT) is one of them. Although there are many reasons to be cautious when it comes to an early stage biotech stock like Editas, there are a number of reasons it could be a promising investment in a high-growth, high-risk portfolio. 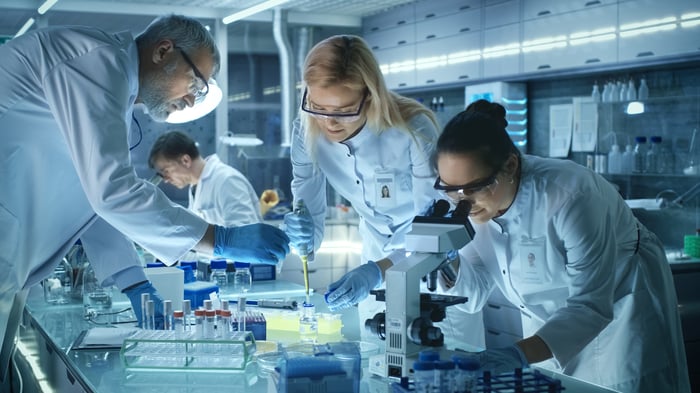 Editas' top drug candidate is a therapy called EDIT-101, which targets a rare form of infant blindness known as Leber congenital amaurosis (LCA). This condition is a rare genetic disorder that affects the retina, the specialized piece of tissue at the back of the eye responsible for detecting light and color. The disease quickly leads to a severe loss of eyesight in newborn infants, in many cases leading to blindness.

There's only one other treatment for LCA on the market, and it only works for a very specific type of LCA. Luxturna is a gene-editing therapy developed by Spark Therapeutics and approved by the U.S. Food and Drug Administration in 2018, but it isn't available for all types of LCA. For patients who qualify for the drug, the price tag is a hefty $425,000 per eye ($850,000 for both eyes) for a one-time treatment to cure the disease.

Considering the hefty price tag charged by Luxturna, it wouldn't be surprising if EDIT-101 charges a similar amount for its own treatment. Unlike Luxturna, EDIT-101 aims to treat all variants of LCA, which could easily make it a potential blockbuster drug in terms of revenue.

At present, Editas is currently conducting a phase 1/2 clinical trial to test the safety of EDIT-101. The first patient has been successfully screened, and the treatment is expected to take place in early 2020.

Editas' second major drug candidate is EDIT-301, a gene therapy that aims to treat sickle cell disease and beta thalassemia. Both diseases are blood disorders that affect hemoglobin, the molecules in red blood cells that transport oxygen to the body. Patients with either disease often have anemia (low iron levels), fatigue, yellow skin and eyes, and stunted growth.

EDIT-301 recently finished its preclinical testing, with Editas reporting strong proof-of-concept results in a study conducted with genetically altered mice. While the company is slowly moving toward testing human patients in early clinical trials, EDIT-301 still has quite a ways to go before it's available to the public.

Sickle cell disease affects around 100,000 Americans, with children being especially vulnerable to the symptoms of the condition. At present, there are no treatments that can cure either of these blood disorders. Medical researchers are experimenting with the idea of possible bone marrow transplants, although this would be an expensive option as well.

Competition in the blood disorder market

However, unlike its treatment for LCA, Editas isn't the only gene-editing company to work on a potential solution for sickle cell disease and beta thalassemia. CRISPR Therapeutics is also working on its own sickle cell treatment, CTX001, with the company announcing positive results from the drug's first-ever clinical update. Another company, Sangamo Therapeutics, is developing a pair of drugs to tackle sickle cell disease and beta thalassemia, BIVV-003 and ST-400. However, preliminary results for ST-400 found that some patients experienced adverse effects, including hypersensitivity.

For an early clinical-stage biotech company, revenues are expected to be quite low, while expenses tend to be high. That's exactly the case with Editas, which posted only $3.8 million in revenue for Q3 2019 with a net loss of $32.9 million. Compared to Q3 2018, losses more than doubled from the $15.2 million loss reported then.

What's most important, however, is Editas' cash reserves, which are quite healthy. Cash and cash equivalents were $332.6 million, a healthy sum that's enough to last the company around two and a half years at the current rate of expenditure.

To put these figures into perspective, CRISPR Therapeutics reported in its own Q3 2019 results around $211.9 million in revenue, $138.4 million in losses (which have almost tripled from last year's $50.7 million net loss), and a cash position of $629.7 million. Taking into consideration the difference in market cap, with CRISPR being more than twice as large, Editas' results are for the most part pretty comparable to its larger rival's. The main difference is that Editas' cash reserves will last the company two and a half years before it needs to raise additional funds, whereas CRISPR will run out of money in a little over a year if it doesn't change its expenditures.

Is Editas Medicine a buy?

For most investors, Editas is probably not a buy. Although the gene-editing sector has tremendous potential, with Editas being one of the top companies in this field, the company has a pretty high valuation despite all its drug candidates being still in the early stages of development. Early stage biotech stocks often have valuations between $200 million to $500 million if they're very promising. In comparison, Editas Medicine has a market cap of $1.6 billion. With almost no clinical results to speak of, if Editas was in any other sector, I'd recommend investors stay away until it shows some results.