Please ensure Javascript is enabled for purposes of website accessibility
Log In Help Join The Motley Fool
Free Article Join Over 1 Million Premium Members And Get More In-Depth Stock Guidance and Research
By Anders Bylund - Dec 18, 2019 at 7:07AM

The Tampa-based electronics manufacturing specialist crushed Wall Street's targets -- and its own -- in the first quarter of 2020.

Jabil's first-quarter results by the numbers

Jabil's first-quarter results were mostly in line with management's guidance and internal planning, except for one surprise to the upside: The company's cloud-computing manufacturing services found plenty of traction with so-called hyperscale customers. These very large accounts pushed Jabil's revenues significantly above expectations, including the top end of Jabil's guidance for the quarter at $7.35 billion. Cloud services is a fairly new addition to Jabil's portfolio, with roughly two years of operating history in the books. 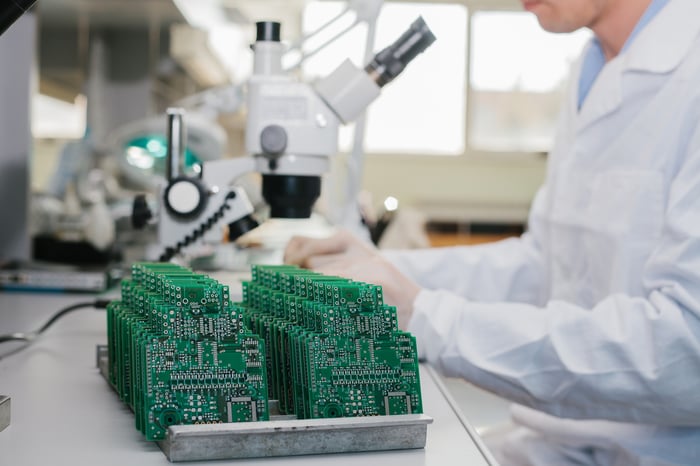 What's next for Jabil?

Looking ahead, Jabil's management expects a 5.5% revenue increase in fiscal 2020 as a whole, landing near $26.7 billion. Adjusted earnings should stop in the neighborhood of $3.60 per share for the full year. The current analyst view of that period points to earnings near $3.45 per share on revenues of roughly $26.2 billion.

Breaking down the forecast in more detail, Jabil sees rising sales in most of its targeted end markets. Healthcare and packaging should lead the way in the diversified manufacturing division, with a year-over-year sales target 31% above the tally from fiscal year 2019. In electronics manufacturing, Jabil is looking for a 32% revenue increase in automotive and semiconductor manufacturing equipment. That's good tidings for investors in those industries, pointing to renewed end-user demand or, in the case of semiconductor equipment, a longer-term rising tide motivating investments in that industry's infrastructure.

Is Jabil a buy today?

Jabil's shares have now gained 86% over the last 52 weeks, driven by a steady stream of impressive earnings reports. That's quite a feat, given the uncertainty many other companies have experienced amid macroeconomic tensions on a global scale.

Even after that huge climb, Jabil's stock still looks affordable with a forward P/E ratio of just 10.2. This might not be the best of all possible times to invest in Jabil, but it's a quality business with a tremendous capacity to thrive in a difficult business environment. Buying into a company like that at a fair price is better than betting on merely decent businesses at a discount, to paraphrase Warren Buffett.