The stock market didn't see any huge moves on Wednesday morning, but investors were nevertheless pleased to see major benchmarks remain resilient even in the face of political uncertainties. Market participants don't seem to be nervous about pending impeachment proceedings against President Trump, instead choosing to focus on the favorable economic trends that the U.S. has seen recently. As of just before 11 a.m. EDT, the Dow Jones Industrial Average (DJINDICES:^DJI) was up 32 points to 28,299. The S&P 500 (SNPINDEX:^GSPC) rose 4 points to 3,196, and the Nasdaq Composite (NASDAQINDEX:^IXIC) gained 15 points to 8,838.

Yet the market did get some bad news from FedEx (NYSE:FDX), which many see as a bellwether for the broader economy. The mergers and acquisitions arena also remained active, with Fiat Chrysler Automobiles (NYSE:FCAU) moving forward with its deal to combine with Peugeot. 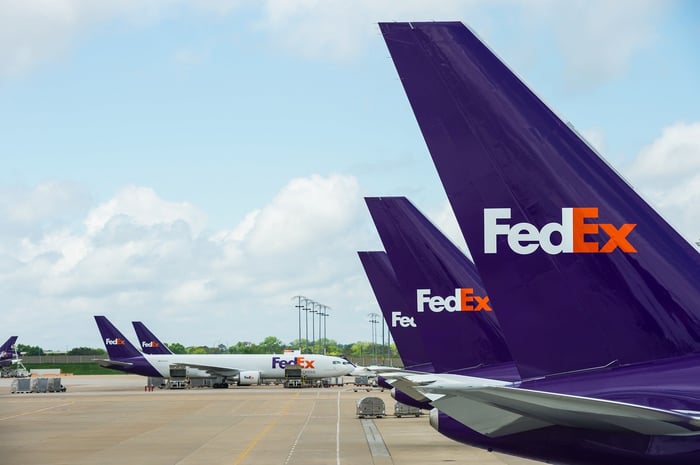 FedEx's numbers weren't pretty. Revenue fell about 3% from year-ago levels, and that spurred an even larger drop of almost 40% in adjusted net income. Earnings figures came in well below what most investors had anticipated. The company said that weak global economic conditions weighed on results, as did the timing of the Thanksgiving holiday and the loss of business from "a large customer" that's an oblique reference to Amazon.com.

CEO Fred Smith noted that FedEx has made improvements to its e-commerce capabilities, expanding service to meet customer demand. Yet even Smith called fiscal 2020 "a year of continued significant challenges and changes," and despite the boost that FedEx has gotten from e-commerce over the years, new competitive threats could pose problems for the company.

FedEx also had to cut its guidance for the full fiscal year, saying that lower revenue and higher expenses are hurting profitability. Although the company has strategic plans to address this, it could take a while for FedEx to get itself back in shape again.

Fiat and Peugeot tie the knot

Shares of Fiat Chrysler Automobiles eased lower by 1% following news that it will move forward with its planned merger with Peugeot. The deal had been in the works for a while, but today's announcement dramatically increases the likelihood of a combination going forward.

Fiat and Peugeot have high hopes for the deal, arguing that larger scale will help them invest more effectively in areas like mobility solutions, autonomous driving, and electric vehicles. The two automakers have well-known brands that they can use more effectively together, and the two management teams have what the companies called an "excellent working relationship," with "successful track records in turnarounds, value creation, and successful [original equipment manufacturer] combinations."

The two automakers predict that the combined company will have sales of 8.7 million vehicles annually, with revenue of about 170 billion euros and operating profit of more than 11 million euros. The larger size should give the company a stronger ability to weather economic downturns in key areas globally, especially in China.

Even though Fiat has higher sales, the announcement makes clear the intent that the combination be a 50/50 merger of equals. How that plays out remains to be seen, but if the global economy remains slow, investors can expect to see more consolidation in the auto industry over the long run.