American Eagle Outfitters (NYSE:AEO) last week reported record revenue for the quarter, but the stock market still isn't happy. Considering the overall outlook for retail and a few key points in American Eagle's report, the reaction wasn't surprising or unjustified. The shares, already down 21.8% for the year leading up to the report, fell 6.5% on the day after the news.

The retailer, known for stylishly relaxed clothing like jeans and athletic apparel, started out its third-quarter report with some good news: Same-store sales climbed 5% for 19 straight quarters of growth, and total revenue gained 6% to reach a record $1.07 billion. Earnings per share was $0.48, in line with analyst estimates, though that follows three consecutive quarters of surpassing estimates. 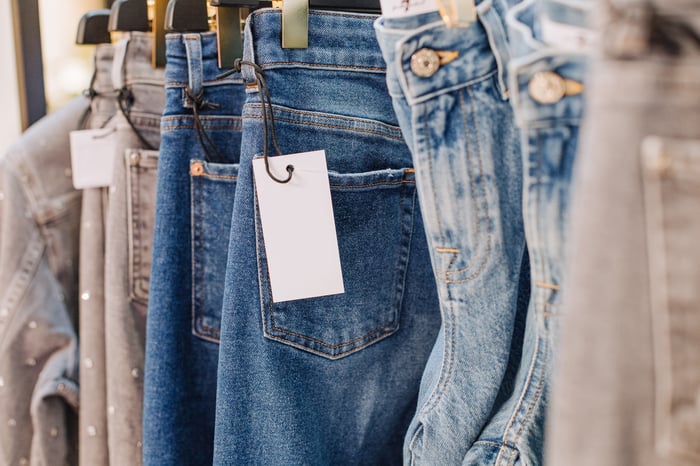 Flat earnings forecasts were its downfall

Now the not-so-good news: The company predicted flat same-store sales for the fourth quarter and said it expects earnings per share of $0.34 to $0.36. The EPS figure missed the $0.46 per share estimate of Wall Street analysts. American Eagle also reported a 9% increase in inventories to the at-cost figure of $647 million and said weak demand in some clothing categories has led to price markdowns. Although the company said it is working to "quickly course correct," it's unclear exactly how that will be done and how long it will take.

From an earnings perspective, American Eagle had a better quarter than competitors Abercrombie & Fitch (NYSE:ANF) and Urban Outfitters (NASDAQ:URBN), which both missed analyst estimates. But all three companies are facing similar issues, producing similar comments and predictions in their earnings reports. For instance, Abercrombie and Urban Outfitters also reported increases in inventory, and Abercrombie predicted same-store sales in the fourth quarter will be flat to up 2%, compared with a 3% gain in the same period a year ago.

Apparel retailers are suffering from a generally grim environment for brick-and-mortar players for several reasons, including a decline in shopping mall foot traffic. Credit Suisse analysts in a 2017 report wrote that they expect 20% to 25% of malls to close by 2022. Though American Eagle, like its peers, has an e-commerce site, it is primarily known as a brick-and-mortar store. U.S. online retail sales jumped 15% last year from the previous year, while retail sales in stores grew only 3.7%, according to Internet Retailer data.

American Eagle also faces the phenomenon of clothing oversupply -- the fact that many of us just have too many shirts and sweaters in our closets. According to a CNBC report in October, Morgan Stanley analyst Geoff Ruddell wrote that consumers own so much clothing that purchases of it no longer lead to a moment of happiness. The clothing market is "going into structural decline," he concluded.

Within such a setting, it's difficult to be optimistic about the future of apparel retailers unless they clearly lay out plans detailing how they will address these challenges. Considering this year's share decline and the stock's valuation, American Eagle might look inexpensive at the moment. The stock trades at 9.9 times earnings versus a valuation of 13 for the retail (including apparel and shoes) industry. Its valuation is lower than that of Abercrombie, which trades at 21 times earnings, and is in line with that of Urban Outfitters, which trades at 11 times earnings. But with the general headwinds pummeling the industry, the struggles might not be over for American Eagle and its peers, making it too early to consider the stock a bargain.