You never know when the next market crash is coming. But there will absolutely be another big market crash, and another, followed by another. These events may be months apart, or years, and maybe even decades. Like the grim reaper and the taxman, they're coming. There's nothing you can do about it.

Except, you can always prepare for the next market calamity. Some stocks should be able to stay afloat as most of the stock market sinks, setting your portfolio up with a solid core at the start of the equally inevitable rebound. On that note, three great stocks to hold when the next market crash shows up are Walt Disney (NYSE:DIS), Target (NYSE:TGT), and Anheuser-Busch InBev (NYSE:BUD).

Here's why these stocks are better companions in a sudden market storm than most of their Wall Street peers. 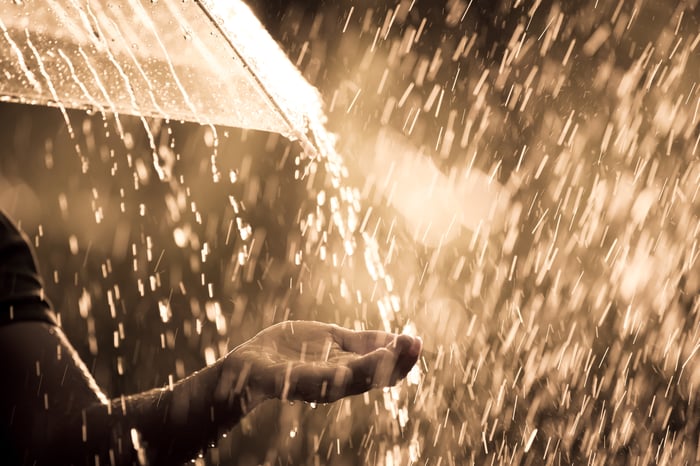 I can't think of a single company that's better prepared to survive the next downturn than the House of Mouse.

The wide-ranging entertainment conglomerate owns some of the most recognizable brands in the world, ranging from the company name itself and the Mickey Mouse mascot to franchises like Star Wars, the Marvel superheroes, and the whole Pixar portfolio.

The $71 billion buyout of 21st Century Fox in 2019 added even more heft to Disney's unmatched content catalog. The company now owns 8 of the 10 biggest box office hits ever. That sweet, sweet content is the very lifeblood of Disney's other operations, allowing the company to dress up theme parks, cruise ships, lunch boxes, and streaming video services with familiar names and titles.

It's true that some of these properties do suffer in a general economic breakdown. Fewer families will plan Disney cruises or trips to Disney World when the vacation fund might have to serve as a rainy-day reserve instead. In the 2008 meltdown, Disney took steps to cut costs and tighten up its operations when the dark clouds rolled in.

That action also set Disney up to do better when the market recovery started. Disney shareholders at the start of 2008 suffered a 54% price drop before the recovery started in March, 2009. That plunge was roughly in line with the S&P 500. But by the end of 2009, Disney's stock had posted a full recovery while the overall market was nursing a 24% drop compared to the start of 2008. And one year later, Disney was enjoying a 16% gain in 3 years. The S&P 500 benchmark was still down 14% over the same period. Those who added to their Disney holdings near the bottom pocketed as much as a 148% gain by the end of 2010 -- and 870% as of this writing roughly a decade later.

If anything has changed since the market meltdown of 2008, Disney is in better shape to weather another storm this time. The media empire has never been bigger or better, and that's saying something. The next meltdown should be a breeze for Disney and its investors.

This well-known discount retailer also scored a full recovery from the 2008 crash by the end of 2009 and a double-digit 3-year gain at the end of 2010. Efficient sellers of consumer staples tend to do well when the market turns sour, and Target is among the best-run companies in that sector.

In a retail environment under the shadow of rising e-commerce rivals, Target has sharpened its focus on ordinary staples such as groceries and essential household goods. That's a bet on exactly the sort of operations that would remain in high demand throughout any and every market downturn.

The company is also tapping into the current zeitgeist through several forms of online shopping where the goods are delivered to the customer by same-day delivery, curbside at the local store, or via ordinary shipping services. This traditional retail giant is fully equipped to survive both the e-commerce onslaught and the next marketwide disaster event.

Tell me if you've heard this one before. The Budweiser brewer took a haircut in 2008 but recovered entirely one year later and sported a double-digit gain by the end of 2010. The difference this time is that Anheuser's initial drop was smaller, stopping just 15% below the year-end share prices of 2007. Otherwise, you know the drill. Beer is one of those essential staples whose sales never really drop, even in the face of harsh economic pressure and uncertainty.

The king of beers is wrestling with a heavy debt load after several large acquisitions in recent years, going as far as slashing its dividend payout in half last year. That move freed up some much-needed cash to help with the debt payments, and the company is also selling off some non-core assets for the same reason. All of this is helping Anheuser hold on to its royal crown.

In general, you could reach for nearly any high-quality sin stock in preparation for another market downturn. So why not go for one of the best names in that business?