Investors thinking of selling and locking in the impressive return might want to reconsider, because there is more growth on the way. 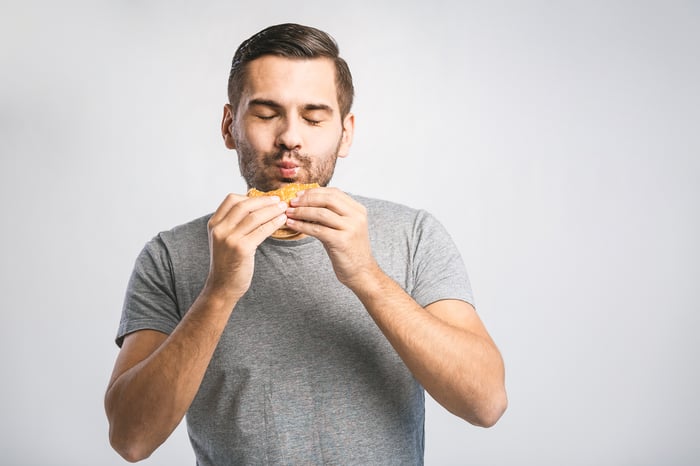 From a hot dog cart to an international company

Shake Shack was started in 2001 by Danny Meyer, selling hot dogs for three summers out of a hot dog cart. After three summers, Meyer decided to set up a permanent location, which has now grown to 254 locations as of the recent third quarter. Opening even more sites, the company is on track to "exceed original targets of at least 200 domestic company-operated and 120 licensed Shacks by the end of 2020."

Recent third-quarter earnings beat analyst earnings-per-share expectations -- coming in at $0.26 over the consensus $0.21 per share. In addition, trailing-12-month revenue has a 34% CAGR from 2015 to the recent quarter, in addition to a 28% CAGR in cash flow from operations.

Operating internationally, Shake Shack entered China, Mexico, the Philippines, and Singapore in 2019, with a continued focus on airport locations, both internationally and domestic.

Continued growth is on the way

Shake Shack is a growth company with a year-over-year revenue growth of 32% with a forward EBITDA growth of 16%. Comparing it with Chipotle (NYSE:CMG) -- a fast-casual dining competitor -- it's easy to go back and forth between the two, trying to determine which one is best to buy right now.

Chipotle has a forward price to earnings of 59 against Shake Shack's 90. However, Chipotle's year-over-year revenue growth is 13% -- nearly 19 percentage points below Shake Shack's. Lastly, Shake Shack takes the win with a price-to-sales ratio of 3.1 over Chipotle's 4.2.

These fundamentals give Shake Shack a leg up as a growth company, and management is confident the trend will continue. However, investors are betting heavily on Chipotle, with a year-to-date share price increase of 89% over Shake Shack's 29% increase.

Shake Shack's share price growth has more than doubled from the IPO date in 2015 and continues to show impressive results. Maintaining strong margins in combination with strategic company-owned and licensed openings, Shake Shack has the potential to meet or exceed analyst revenue estimates in 2021 at $891 million. These factors give shareholders a good reason to hold onto shares of Shake Shack, as this growth story is only in its infancy.