We'll soon be bidding farewell to 2019. So this is a good time to look back on the year's best-performing stocks in various categories.

Water utility stocks continued their great run this year, with nearly all the larger ones outperforming the market -- especially impressive since the overall market was very strong. Here's how the 10 water utility stocks with market caps greater than $300 million stacked up by performance in 2019. 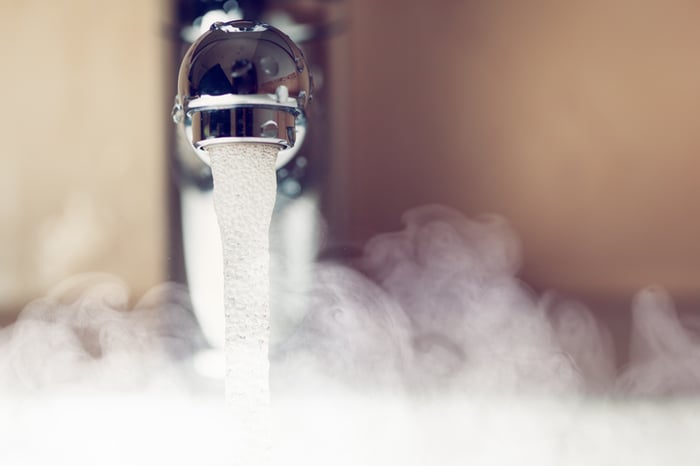 Before we get into our U.S.-based winners, you should know that Sabesp is a Brazilian water utility, and its stock has been extremely volatile due to political and currency risks and frequent droughts.

York takes its name from the city (or county) in south-central Pennsylvania where it's based. The company provides regulated water and wastewater services to 48 municipalities within York and Adams counties.

Aqua America, based in suburban Philadelphia, now expects to close on its acquisition of Pittsburgh-based natural gas utility Peoples late this year or in early 2020. This marriage, announced in October of last year, will unite the second-largest U.S. water utility and fifth-largest U.S. stand-alone natural gas local distribution company (based on customer count). At the time of the announcement, Aqua America said it expected its U.S. regulated rate base to consist of about 70% water and wastewater and 30% natural gas.

In the utility sector, water utilities are generally considered the most conservative industry. So investors should keep this in mind when considering investing in Aqua America.

New Jersey-based American Water is the biggie in the industry, with operations in 46 states. Once it closes on the sale of its regulated business in New York (to Liberty Utilities, the regulated utility business of Algonquin Power & Utilities), it will have regulated operations in 15 states. That's about double the number as the second most geographically diverse U.S. water utility, Aqua America.

One big thing to like about American Water is that Wall Street analysts project it will grow earnings per share at an average annual pace of 8.2% over the next five years. That's an expected earnings growth rate that is faster than all the other pure-play water utilities except California Water.