Please ensure Javascript is enabled for purposes of website accessibility
Log In Help Join The Motley Fool
Free Article Join Over 1 Million Premium Members And Get More In-Depth Stock Guidance and Research
By Jennifer Saibil - Dec 20, 2019 at 10:25AM

Kate Spade has seen declining sales since being purchased by Tapestry. Will a new CEO be able to turn the brand around?

Kate Spade, the brand, burst onto the New York fashion scene in the 1990s with a fresh approach to luxury handbags that quickly defined a new American luxe style. The look was minimalist and effortless yet bright and colorful. It scored big with the younger set and has remained popular over the last three decades, creating a kingdom of millennial fans.

Coach, on the other hand, was the epitome of classic, Upper East Side ladies, popular with an older crowd. Cognizant of its shortcomings, however, the brand, now known as Tapestry (TPR 6.76%), made a strategic acquisition of Kate Spade in 2017 to round out its merchandise selection and reach another cohort.

So far, the venture has failed miserably, and the CEO of Kate Spade is making an exit. 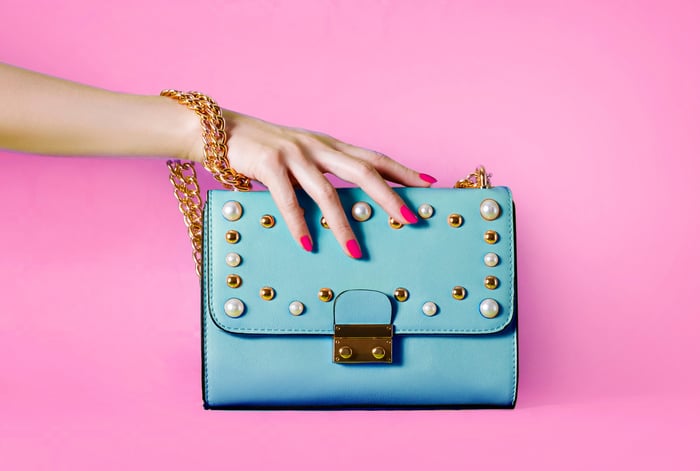 Why the brand is failing

As one of the most recognizable names in luxury handbags, Kate Spade would certainly seem like a good investment. However, a number of problems have dogged the brand since its acquisition.

What can a new CEO do?

Axing the CEO is a popular move when a brand or a company is failing. Depending on the depth of the problems, a new top exec might bring in fresh skills to pull the ship up to speed or might struggle with weighty baggage that sinks the business regardless.

Anna Bakst, who will depart at the end of the year, came over from Michael Kors, now known as Capri Holdings, in 2018 after building up that brand's accessories division. It definitely looked like a good fit.

Kate Spade was originally acquired in 2007 by Liz Claiborne for $124 million, which eventually changed its name to the more fashion-forward Kate Spade and Co. Liz Claiborne was a mall standard, and the company splashed its lower-value approach onto Kate Spade by bringing it to malls everywhere, beginning the downward slide. In other words, the decline had already been set in motion, and it was Bakst's situation to inherit.

What the job entails

But incoming CEO Jide Zeitlin is pretty specific about how he plans to put the brand back on its feet:

During the company's first-quarter conference call, he explained that the Coach brand faced a similar situation several years ago and bounced back to achieve greater importance. It didn't happen overnight, and that's not likely to happen for Kate Spade, either, but the company strongly believes in the brand, its ability to connect with customers, and the ability to turn that into a successful business long term. He continued, "More time is required to drive a positive inflection in the business. ... We acknowledge that there are opportunities to improve performance and we are addressing those areas with a sense of urgency."

The company brought in a new creative director, Nicola Glass, last year, and hiring a new CEO is the next step in the process of reinventing the brand and reigniting the consumer discretionary company's stock.

The decision to diversify by adding two well-known names in luxury (Tapestry also acquired Stuart Weitzman) was a reasonable move, and it may still prove to be the right one. Right now, however, Kate Spade is a blemish on the company's success story, and the first-quarter numbers were definitely worrisome.

Management, while unsurprised by these numbers and realistic about how soon the company might see a change, is still expecting "sequential improvement in the Kate business."

Zeitlin displayed zero regret for the acquisition, showing confidence in the vision of a stronger multibrand business and the company's power to improve: "When working with (a) premium fashion brand, positioning yourself for sustained growth does not happen in a straight line. It's a process that we know well, and it's a process that we're confident that we will get right."