Bristol-Myers Squibb (NYSE:BMY) closed on its acquisition of Celgene in November. The big drugmaker announced plans to buy Celgene earlier this year for $74 billion. That amount was based on $50 in cash plus one BMS share for every Celgene share owned with a contingent value right (CVR) share thrown in that will pay $9 if three of Celgene's drugs win Food and Drug Administration approvals by specified dates.

But the final price tag paid by Bristol-Myers Squibb ended up being higher than originally anticipated. That's because the big pharmaceutical stock has been on a tear in recent months, boosting the overall amount that Celgene shareholders received with the buyout.

BMS could get help in paying for its purchase of Celgene from an unlikely source: Gilead Sciences (NASDAQ:GILD). Here's how the big biotech just might partially bankroll BMS' acquisition. 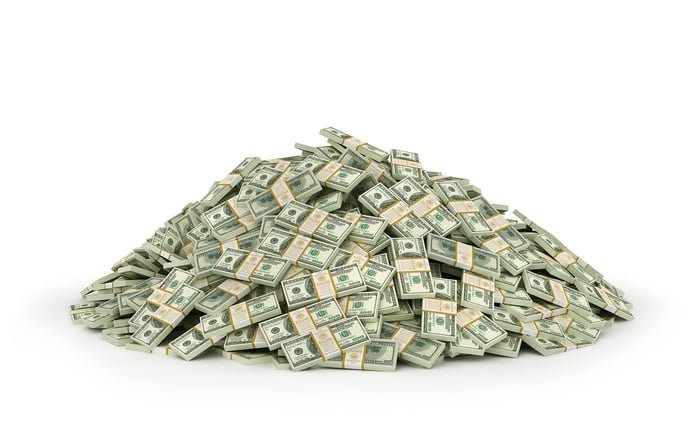 A big win in court

To understand how Gilead Sciences could help fund Bristol-Myers Squibb's buyout of Celgene, we first have to know the history behind several acquisitions completed in recent years. In 2017, Gilead acquired Kite Pharma, picking up its promising chimeric antigen receptor T cell (CAR-T) program. The next year, Celgene acquired Juno Therapeutics, which also claimed a promising CAR-T program. And, as mentioned earlier, BMS acquired Celgene only a few weeks ago.

Sloan Kettering and the Memorial Sloan Kettering (MSK) Cancer Center pioneered CAR-T research and secured U.S. patents for which Juno obtained an exclusive license in 2013. Kite challenged this patent in 2015, but the U.S. Patent and Trademark Office (USPTO) upheld the patents that Juno licensed from MSK.

Kite went on to win FDA approval for its first CAR-T therapy, Yescarta, in late 2017, shortly after being acquired by Gilead. Juno promptly sued the biotech, alleging that it had infringed on one of its CAR-T patents exclusively licensed from MSK.

Last week, a verdict was reached in that case. The jury ordered that Kite, which is now part of Gilead, fork over $585 million in damages to Juno, which is now owned by Bristol-Myers Squibb. In addition, Kite must pay royalties of 27.6% on all sales of Yescarta. Based on sales to date, that means that Gilead would have to pay $752 million to BMS. With Yescarta projected to reach peak annual sales of close to $1.5 billion, those royalties will add up to a lot more money over time.

Gilead plans to file post-trial motions addressing its concerns with the verdict. The company could also appeal the decision. As it stands right now, though, Gilead will help BMS pay for its buyout of Celgene.

Another big biotech is helping, too

There's also another big biotech that's partially funding BMS' acquisition of Celgene, albeit on much friendlier terms. Amgen (NASDAQ:AMGN) paid $13.4 billion to buy Celgene's Otezla in a deal that closed the day after BMS' purchase of Celgene finalized.

Antitrust regulators required that the immunology drug be sold before BMS could acquire Celgene. BMS already has its own blockbuster immunology drug, Orencia.

Amgen was an ideal buyer for Otezla. The company claims a solid sales force focused on the immunology market thanks to its tremendously successful drug Enbrel and its newer biosimilar to Humira. With Enbrel's sales declining, Otezla fills a hole in Amgen's lineup.

Paying the rest of the bill

BMS shouldn't have to worry about paying for the rest of the bill related to its buyout of Celgene. Blood cancer drugs Revlimid and Pomalyst are on track to generate more than $13 billion in sales this year. Celgene's other drugs, notably including Abraxane, should kick in another $2 billion or so.

But the big bonanza for BMS in buying Celgene was the biotech's new drugs and pipeline candidates. Myelofibrosis drug Inrebic and blood disease drug Reblozyl, both of which picked up FDA approvals this year, should be blockbusters. Multiple sclerosis drug ozanimod and CAR-T therapies liso-cel and ide-cel should be even bigger winners if approved.

BMS would have bought Celgene regardless of what happened in the legal battle over its CAR-T patent. However, the company is undoubtedly pleased that Gilead, a key rival in cell therapy and potentially in immunology in the near future, is set to help pay for the Celgene acquisition.