All of the hoopla about recession has been seemingly forgotten. The jobs reports for the U.S. indicate businesses are still hiring, U.S. consumers are still spending, and even the manufacturing sector is showing signs of picking up again. Perhaps the most worrisome sign from earlier this year, though, was the inverted yield curve -- when short-term interest rates exceed those of long-term rates. That too has normalized. 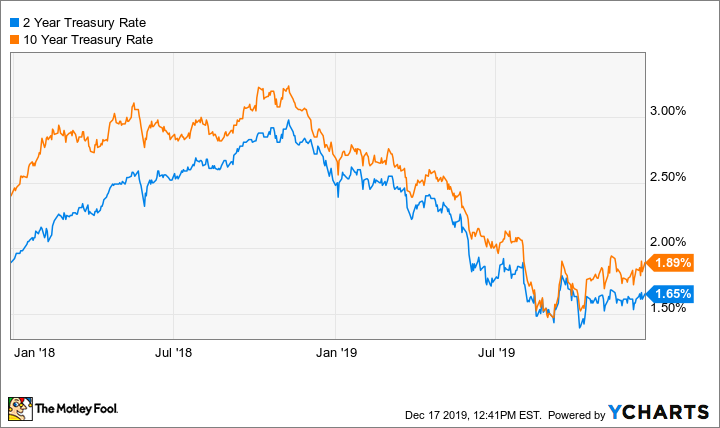 Not to worry, right? Not so fast. While a recession doesn't always occur after such an event, if it does, it's usually a year or two later. In the meantime, interest rates returning to some semblance of normalcy is to be expected. Here's an example showing interest rates before the Great Recession of 2008-'09. 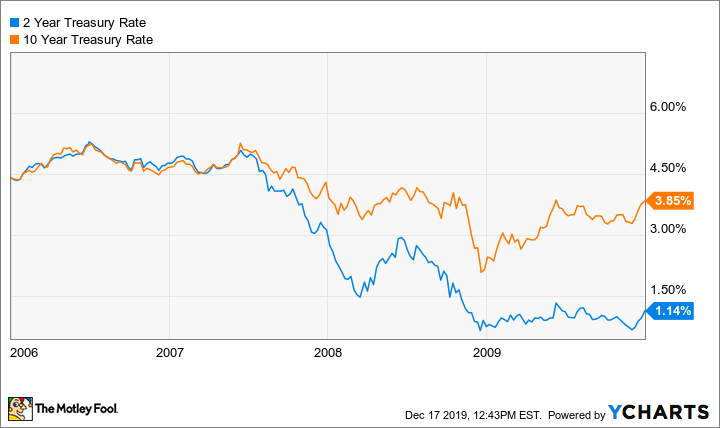 Put another way, just because the interest rate curve looks the way it should again doesn't mean we're out of the woods. But enough with the doom and gloom. Recessions aren't fun, but it's important to remember it's defined as a temporary dip in economic activity -- usually a mild dip -- not the end of economic activity. Most businesses survive, and in fact some are recession-ready -- what I define as a business that will remain strong no matter what the economy does, has its financial affairs in order, and currently trades for a reasonable price. I think telecoms and internet providers like Verizon, AT&T, and Comcast fit the bill at the moment. However, for the sake of subverting expectations for a typical recession investing article, I want to talk instead about PayPal (NASDAQ:PYPL), Disney (NYSE:DIS), and Seagate Technologies (NASDAQ:STX). 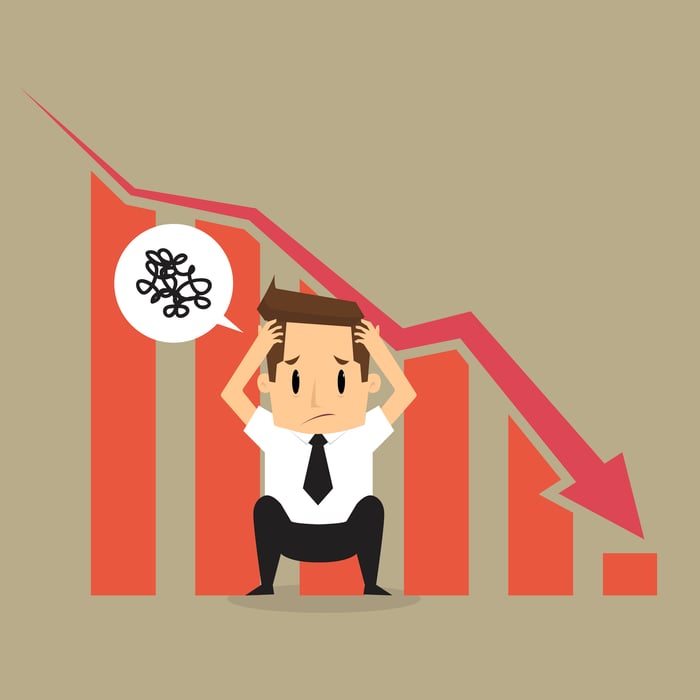 One of the fist stocks I ever purchased was Visa (NYSE:V) shortly after its IPO in 2008. After quickly running higher, things got real ugly for Visa stock as the Great Recession deepened. The green investor I was went from feeling like a genius to a total failure as Visa dipped below its IPO price. But, as several seasoned pros pointed out to me, Visa doesn't lend money, so the financial crisis wasn't going to permanently decimate the business. So I held on (but not for the whole decade; I sold a few years after the crisis to buy my first home, one of my many investment regrets and lessons learned) and turned a tidy profit from one of the best war-on-cash stocks of the 2010s.

What's this to PayPal? Digital payments and cashless transactions are still on the rise, and this is one of best ways to play it. Also the owner of cash movement app Venmo, Paypal's roots in the 21st-century financial system are deepening. It recently made its record $4 billion acquisition of e-commerce technologist Honey. Another recent announcement about an extended relationship with Citi (NYSE:C) means the bank's institutional clients have the added option to pay directly to a PayPal digital wallet. Earlier in 2019, PayPal was also the first non-Chinese payment processor given the go-ahead to enter the world's most populous country with its 70% stake in GoPay.

New activity like this is commonplace at PayPal, though, and that's not likely to end when the next recession strikes. Digital payment systems are only gaining momentum. To wit, total payment volume throughout all of PayPal's services grew 25% in the third quarter of 2019, and revenue and earnings were up 14% and 34%, respectively, through three-quarters of 2019. Total debt is $4.96 billion, while cash and short-term investments total $10.5 billion. This balance sheet is squeaky clean.

Sure, all of that comes for a hefty premium; the stock trades for 31.4 times one-year forward expected earnings. But PayPal's momentum is strong and cashless transactions should only continue to rise over the long-term. In case of recession, PayPal is ready and would be a great buy-the-dip candidate.

A new streaming giant in the making

As many entrepreneurs know, often the best time to start a new business is in times of distress. While established companies are struggling, swooping in and stealing away customers is a little bit easier than in good times. Just ask Netflix (NASDAQ:NFLX). The tiny but fast-growing upstart's stock almost doubled during the Great Recession as consumers flocked to the in-home entertainment service in a bid to save money.

Fast forward to today, and Netflix sits atop the streaming TV industry by a wide margin. But Disney is making a run at closing the gap. Disney+ is off to a blistering start with over 20 million app downloads after just a month of existence, ESPN+ has a few million subscribers, and Hulu also continues to make steady progress and is honing in on 30 million subscribers. Put simply, Disney is well on its way to establishing a viable internet-based entertainment offering.

Of course, even with tens of millions of streaming households, Disney will remain first and foremost a theme park and media network business. During its recently concluded 2019 fiscal year, those two segments accounted for three-quarters of revenue and nearly all of the operating profit -- with the remaining amount attributable to box office profits. Vacations, TV advertising, and traditional cable subscriptions are likely to take a hit if the economy goes through a rough patch.

However, Disney theme parks have been through the gauntlet before, and their status as a top destination is still intact. Though that segment took a hit in 2008-'09, it recovered quickly -- and Disney stock was back to pre-crisis breakeven by the end of 2009. And as for the media networks business (read ESPN and ABC), Disney is self-disrupting with its streaming ambitions. Rather than wait for an all-out bloodbath, it's making the first move to future-proof its home entertainment operation. It likely won't be a Netflix story should recession hit, but businesses willing to forego profits now for the long game are admirable and a must-own.

Plus, there's the studio entertainment segment, the best in the industry -- at least in terms of money-making ability. Disney will likely finish 2019 with seven of the top 10 highest-grossing box office films when Star Wars: The Rise of Skywalker hits the silver screen, joining blockbusters Avengers: Endgame, The Lion King, Toy Story 4, Captain Marvel, Frozen 2, and Aladdin. That doesn't include future contributions from Fox's studios. All on its own, the results are impressive, but it's important to remember Disney's theater event prowess is an important way for it to offset content costs before moving it over to Disney+ and Hulu. Put simply, the well-established empire of Mickey is only getting more powerful and has little to worry about if an economic downturn comes knocking. Trading at 23.7 times forward earnings (which includes short-term losses from streaming), Disney is going for a fair price right now.

Dividends matter, and so does cheap memory

The hardware supplier business -- especially that which pertains to semiconductors and related hardware technology -- is a cyclical business. Periods of strong demand and high selling prices (boom times for suppliers) give way to periods of drought and falling selling prices. The digital memory storage industry has been in such a slump for the duration of 2019.

So why would a company like Seagate Technologies make it on this list? Revenue and adjusted earnings per share during its 2019 fiscal year fell 7% and 13%, respectively, and things didn't improve in the first quarter of fiscal 2020 with another 14% and 46% year-over-year respective decline. Ouch.

Nevertheless, even in lean times like the current period, Seagate remains a profitable enterprise. Not every digital memory manufacturer can boast that. In fact, Seagate's free cash flow in Q1 2020 was positive $309 million, an actual sequential improvement from the $297 million posted in the last quarter. The company's focus on older and cheaper hard disk drive technology -- especially geared toward data centers and other business usage -- has meant a more shallow dip than most of its peers.

During its 2020 fiscal year, management maintains things should improve. But what about during a recession? I think Seagate and its portfolio of more affordable tech hardware should do just fine and attract customers looking to slim down on their budgets. Plus, dividends matter during a downturn, and even after a 53% stock rally this year, shares are yielding 4.4%. Long-term debt of $4.14 billion is also manageable given the company's profitability, but likely partly accounts for the depressed 11.3 price-to-forward-earnings ratio. Seagate Technology thus looks like a buy to me -- whether a recession is coming for us all or not.