Tencent Holdings (OTC:TCEHY) is not as widely followed as some American tech companies, but it deserves to be on investors' radar. The Chinese tech giant is a leader in social media, cloud computing, gaming, fintech, and video streaming. Even after a pullback in the share price last year, the stock has returned more than 200% for investors over the last five years.

The long-term growth opportunities in these markets is substantial, but the share price has been underwater since the beginning of 2018. Momentum in the gaming business, which makes up nearly a third of Tencent's revenue, came to a screeching halt when regulatory authorities in China halted new game approvals. Additionally, the weak economic environment in China has pressured growth in media advertising, which Tencent relies on to monetize its video streaming service (Tencent Video).

Tencent offers plenty of growth for investors, but as we've seen over the last year, the dependency on China is a real risk. However, a lot of this risk is already priced in, which could present an ideal to time invest in one of the leading tech companies in China. 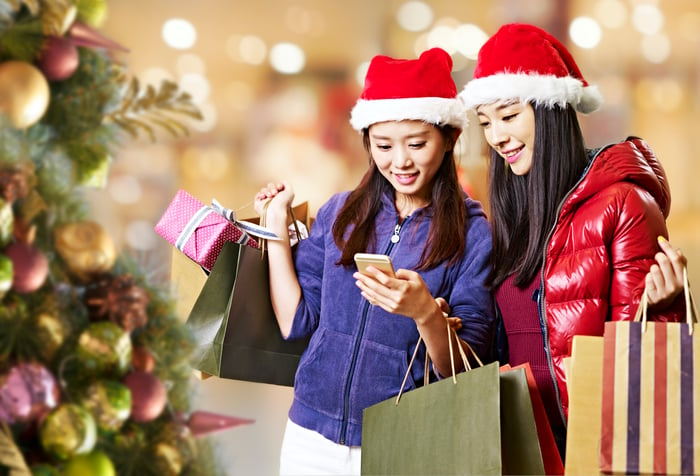 Tencent is still putting up good numbers despite the recent headwinds. Revenue increased by 21% year over year in the third quarter. For the full year, analysts expect Tencent to report revenue growth of 16%, while earnings should be up 15%. Next year, analysts expect Tencent to be back to full strength, with revenue improving to $64 billion, representing a growth rate of 22% over 2019. Earnings are expected to grow in tandem with revenue.

At the heart of Tencent's business is its ubiquitous WeChat social media app, where users can message friends and play games. The app is so entrenched in the lives of Chinese consumers that it would be nearly impossible to replace. Through WeChat Pay, the mobile payments service built-in to the app, users can schedule flights, book hotels, buy movie tickets, and even pay for doctor's visits. Tencent shares a duopoly with e-commerce giant Alibaba in China's digital payments market.

In addition to payments, Tencent monetizes its social networks with advertising, fees, and digital items sold in games. Tencent also develops in-house and licenses from other game companies more than 140 PC and smartphone games for distribution in China. These include some of the most popular titles in the video game industry, including battle royale shooter Playerunkown's Battlegrounds, Honour of Kings, and League of Legends.

Gaming revenue is included in Tencent's value-added services (VAS) segment, which also includes revenue from virtual items sold through minigames in WeChat and makes up most of the company's revenue.

Tencent has several levers it can pull to generate growth

The weak ad spending environment in China has mainly affected Tencent's media advertising in its video services. Revenue from media ads fell 28% year over year in the third quarter.

Additionally, government approvals for new game releases are resuming and shouldn't pose a problem heading into next year. Revenue from gaming increased 11% year over year last quarter and made up 29% of Tencent's business. This is a significant improvement over the previous two quarters, where gaming revenue declined 1% in the first quarter and increased 8% in the second quarter.

Clearly, Tencent would like to avoid future obstacles in its gaming business after China's regulatory risk became a reality last year. To mitigate this risk, Tencent is starting to pursue growth outside of China's gaming market. In October, Activision Blizzard's (NASDAQ:ATVI) Call of Duty: Mobile, developed by Tencent, got off to a strong start, with 148 million downloads in the first month of release. The two companies will share revenue from the game going forward. Call of Duty: Mobile is not available in China, as it's yet to be approved for release, but strong sales internationally could make the title one of Tencent's most profitable games.

Over the last four quarters, Tencent generated RMB 108.6 billion (or about $15.6 billion based on current exchange rates) from game sales. That's roughly twice the annual revenue of the U.S. leader, Activision Blizzard. Virtually all of Tencent's gaming revenue is from smartphone games, which are played by 95% of Chinese gamers.

With more than a billion users combined across Weixin and WeChat, Tencent has built a strong network effect (a competitive advantage) that should continue to fuel satisfactory returns over the next decade. Deep engagement with WeChat, for example, has led to strong growth in Tencent's payments business. Merchants have taken notice of the massive user base and are more willing to accept WeChat Pay, which makes more people in China want to use the app.

The long-term hurdle Tencent will need to overcome is its dependency on China for growth in every area of its business. That said, Tencent is showing the potential to be successful as an international game company with Call of Duty: Mobile.

Tencent Cloud is also starting to expand beyond the confines of China, but this doesn't guarantee success since it will be going up against global heavyweights like Microsoft, Amazon.com, and Alphabet's Google Cloud. 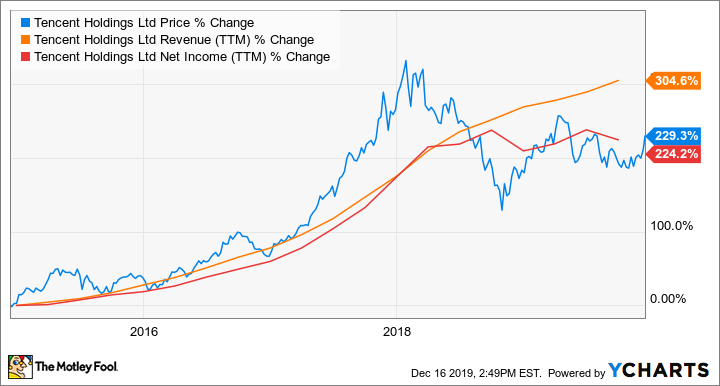 Given the potential roadblocks, Tencent is not a stock on which I'd want to anchor my portfolio. U.S.-based tech leaders like Amazon.com or Alphabet are better for that, but the Chinese gaming giant is still worth a buy at current levels.

Its valuation is not expensive relative to underlying earnings growth: the forward price-to-earnings ratio is currently at 27.5 times next year's earnings estimates. That seems fair for a company expected to grow earnings by 22% next year.

If you're looking for a growth stock that's not on everyone's radar, Tencent is worth considering.