The bad news has been stacking up for brick-and-mortar retailers, with online competition growing, malls struggling, and price promotions around the holidays putting pressure on earnings.

In the latest blow, Moody's recently cut its forecast for the entire department store sector. The credit rating agency now expects profits to decline 20% in 2019 compared with its earlier prediction of 15%, according to industry blog retailtouchpoints.com.

But within the Moody's report came a glimmer of good news for investors looking for retail shares to add to their portfolio. Off-price retailers such as TJMaxx, owned by TJX Companies (NYSE:TJX), and Ross (NASDAQ:ROST) are turning inventory twice as fast as department stores. As traditional retailers suffer, TJX and Ross, which have both reported positive earnings surprises in the past quarter, may have more good earnings news ahead and that could translate into stock market gains. 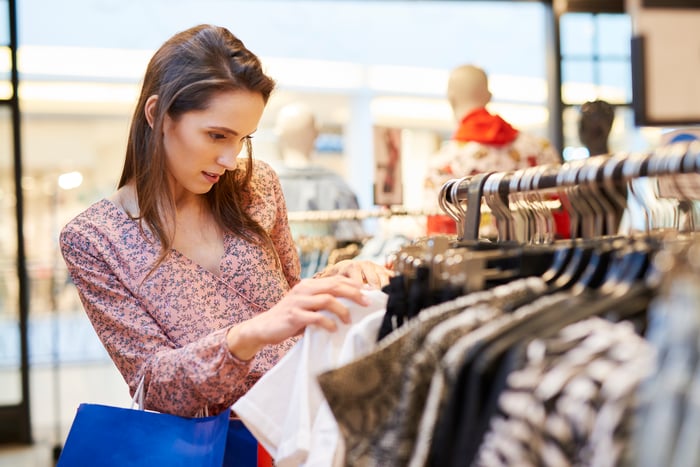 Off-price retailers are outperforming traditional retailers because, in an environment where shoppers are hungry for promotions, goods at these retailers are always sold at a discount. Since the inventory is ever-changing rather than steady (as it is at a traditional department store), the idea of product scarcity also works to the store's advantage. Shoppers know that a unique Betsey Johnson-styled handbag they just spotted might get scooped up by someone else an hour later -- and the store won't replenish the stock. According to a report by the International Council of Shopping Centers last year, 73% of consumers who shop at off-price retailers prefer them to other stores, and about nine out of 10 U.S. adults shop at these retailers. The thrill of bargain hunting, unexpected finds, and the uniqueness of items are among reasons shoppers flock to off-price options, the report showed.

The TJX holding company owns some of the most well-known off-price retailers, including Marshalls and HomeGoods. For the third quarter of fiscal 2020, TJX reported a 6% increase in net sales and a 4% increase in same-store sales. While department stores such as Macy's and Kohl's cut annual profit guidance, TJX increased its full-year forecast for diluted earnings per share to the range of $2.61 to $2.63 from $2.56 to $2.61. As for the shares, they've climbed 30% so far this year and have about 7% still to gain before reaching the average analyst price target of $65.44. TJX trades at just under 24 times earnings, which may seem expensive compared to Macy's valuation of 5. But considering TJX's earnings strength and outlook, investors in the stock are getting a lot for their money.

Ross, owner of the stores by the same name as well as dd's Discounts, said third-quarter sales rose 8% and same-store sales climbed 5%. The company also lifted guidance for full-year earnings per share to the range of $4.52 to $4.57 from $4.41 to $4.50. While many specialty apparel companies are shuttering stores, Ross said on its latest earnings call that it opened 30 new Ross stores and 12 dd's Discounts to end the year with 1,546 Ross locations and 259 dd stores. The company also said it saw strength across merchandise categories and geographic locations during the quarter. Ross shares have increased 28% this year and still have an upside of 4.3% considering the average analyst share price forecast. Shares trade at 25 times earnings, slightly higher than TJX.

TJX and Ross are close to average analyst target prices due to their solid performance this year, but their earnings news and outlooks indicate there are more good days to come. Add to that shoppers' love for off-price retailers, and the picture is bright. This quality of earnings and an offering that pleases shoppers are what make the purchase of TJX and Ross shares a decent deal.