Delivery speed has grown into a significant factor in purchasing decisions for consumers buying online. The need for speed discussion typically revolves around trains, trucks, boats, and planes. But new technology has been added to the mix -- drones. Companies are now looking to the skies to increase delivery speeds, expand delivery radiuses, and win sales through a unique competitive advantage. 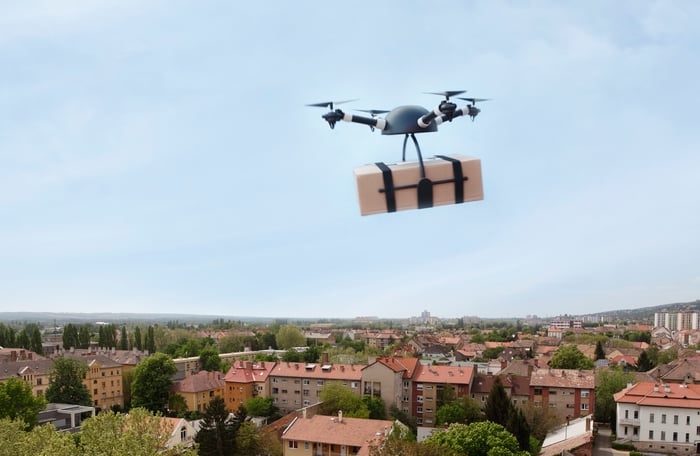 While not the largest company entering the drone race, UPS gets the top spot on the list as the company's drone delivery program was first to receive Part 135 Standard certification with the more important Part 107 waiver from the Federal Aviation Administration (FAA) in October of this year. What's so special about this certification and waiver? The two collectively serve as significant regulatory barriers to entry into the drone delivery market, open up the ability for unlimited scaling, and release governmental control over the types of flights a company can operate.

Amazon received Part 135 Single Pilot certification back in April, a lower-tier version of the certification. Amazon is limited to a single-pilot license and unable to fly outside the line of sight of the pilot or an observer. UPS, though, received the highest variant of the Part 135 certification with no cap on the number of pilots or level of expansion to which it can grow its drone airline. Additionally, this particular Part 135 variant and the Part 107 waiver give UPS the ability to fly outside the line of sight, operate over populated areas, fly at night, and carry cargo over 55 pounds.

In the company's most recent earnings call, it announced that, to date, 1,500 commercial flights have already been conducted. UPS has forged partnerships with the University of Utah, CVS, and Amerisource Bergen to look for new and innovative ways to profit from the technology. While deliveries are currently only being utilized for healthcare needs, the company does have plans to expand its reach to transporting special commodities and other regulated goods.

While UPS is the only company in the drone race with Part 135 Standard certification, Alphabet's Wing is close behind with its single-pilot certification variant. Once its drone technology is up to par, Wing will work closely with the FAA to gain the highest level of certification. Currently, Wing is one of three companies in the drone delivery race with a company official on the FAA's Drone Advisory Committee. The other two companies? UPS and Amazon. Gaining the certification is a five-step process including pre-application, formal application, design assessment, performance assessment, and administrative functions.

Flash back to an episode of 60 Minutes in December of 2013, and you'll hear Amazon CEO Jeff Bezos unveil his plan for drone delivery with an expected integration date of four or five years later. Fast-forward six years later to today, and Amazon hasn't reached that goal. Of all three companies on this list and of all three companies with executives on the FAA's Drone Advisory Committee, Amazon Prime Air is the only one without any level of Part 135 certification. The company did apply for certification in July of this year.

The latest news from the Amazon Prime Air camp was the unveiling of its newest drone design at the re:Mars Conference in Las Vegas, Nevada in June. According to a company blog released the same day as the unveiling, Amazon planned to be "delivering packages via drone to customers within months." Six months later, the company is still working to catch up to Wing and UPS. To date, Amazon has overpromised and underdelivered. But with the financial resources Amazon has, it would be wrong to count the company out of the fight.

As the world waits to see which of these companies can dominate the airspace heading into 2020, there are three things investors or those looking to invest should be monitoring: