If investors focus too intensely on American companies, they can miss out on the many attractive investment opportunities offered by markets in other parts of the world. To help some of them widen their gazes, let's consider three European companies -- all easily available to buy in the U.S. -- each of which offers an attractive combination of a 3%-plus yielding dividend and the prospect of long-term growth: German industrial giant Siemens, and Switzerland's Novartis and ABB.

All three stocks currently yield between 3% and 3.3%, and the analysts' consensus is that they'll grow their earnings before interest, tax, depreciation, and amortization (EBITDA) in the coming years. Novartis is forecast to grow EBITDA at a compound annual growth rate (CAGR) of 5.5% from 2019 through 2021, while Siemens is expected to grow at 8%, and ABB's turnaround strategy is set to produce an EBITDA CAGR of 13.5%.

Data source: www.marketscreener.com, *Siemens figures are for its fiscal 2019-2022

Moreover, based on the companies' forward enterprise value, or EV-to-EBITDA multiples -- a commonly used valuation metric -- all three stocks are cheaper than they have been in recent years.

The numbers add up, but can you believe in them?

The German industrial giant has been in transformation mode in recent years, pivoting toward industrial and process automation and the industrial software that powers it. Its healthcare unit, Siemens Healthineers has been spun off, as has renewable energy business Siemens Gamesa. Its gas-and-power unit is also set to be spun off in 2020, and management even tried to merge its mobility business (rail infrastructure, rolling stock and rail systems) with Alstom.

Siemens still maintains an 85% stake in Siemens Healthineers granting it healthy cash flows from a non-cyclical business, but the future of the company is clearly in the digitization of automation -- an exciting growth area -- alongside its smart infrastructure solutions (power distribution, grid systems, industrial controls).

Siemens certainly faces near-term headwinds -- not least a slowdown in capital spending on automation by the automotive and consumer-electronics industries -- but over the long term, its corporate restructuring looks likely to drive growth.

The numbers above reflect the success of Novartis' current pharmaceutical portfolio, but pharma stocks will always be valued on the potential of their treatment pipelines. The good news is that Novartis is making strong progress on the research-and-development front -- it had five new molecular entities that could become blockbuster drugs approved in 2019 -- and at its recent R&D day event management highlighted the fact that it has 21 phase III program initiations scheduled for the next couple of years, and more than 40 planned filings over the next five years -- around half of which are for new indications for existing drugs.

Throw in the bid to acquire The Medicines Company (NASDAQ: MDCO),  and the near-term opportunity for the launch of cardiovascular drug inclisiran -- regulatory submissions are in process and the drug is expected to contribute to Novartis sales in 2021-- and the future is bright for this company.

Novartis stock offers investors the upside potential from its treatment pipeline, as well as an attractive dividend yield -- a compelling combination. 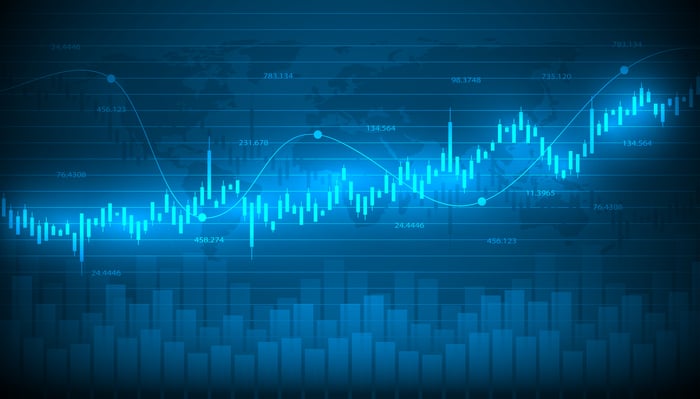 While Siemens is the global leader in industrial and process automation (automated control of raw materials) ABB claims to be the global No. 2 in what it defines as industrial automation and robotics & discrete automation. These are attractive end markets to be operating in, and just like Siemens, ABB is pivoting its business toward them -- for example, it's selling its power grids business to Hitachi in 2020

Like Siemens, ABB sees a clear opportunity to take advantage of the trend toward digitization in industrial production -- the so-called "fourth industrial revolution" -- whereby web-enabled devices and the Internet of Things will enable companies to better manage their physical assets.

It's a compelling proposition, but ABB isn't just a top-line growth story. It also has a substantial opportunity to cut costs and run its business better. The company's EBITDA margin is consistently lower than that of all its major competitors across all its activities -- and ABB's management plans to do something about that.

In addition to divesting itself of the power grids business, the company is changing its organizational structure from a matrix (business units report to a number of different leaders, and work on a project basis) to a more conventional structure. Meanwhile, plans are afoot to cut costs by some $500 million per year. The end result of those moves should lift EBITA margin into the 13% to 16% range, up from the 11.7% generated in the first nine months of 2012. 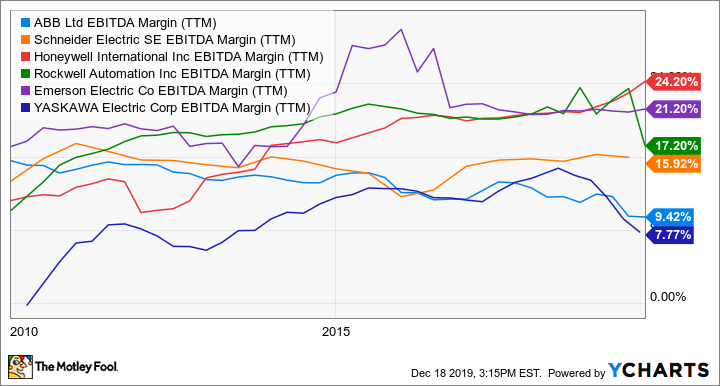 Assuming it all works, then ABB will be a curious combination of a value stock (margin expansion opportunity) a growth stock (pivoting toward automation, robotics, and digital industries) and an income stock that pays you a dividend the yields 3.3% while you wait for management to execute their plans.