There's no denying the early success of The Walt Disney Company's (NYSE:DIS) new Disney+ streaming service. Disney+ garnered an incredible 10 million subscribers within one day after its Nov. 12, 2019 launch, and industry watchers have estimated the service may have already doubled that total to at least 20 million by the end of its first month. This puts it well on its way to achieving Disney's goal for reaching 60 million to 90 million customers by the end of 2024.

But that also spurred concerns that the success of Disney+ is coming at the expense of competitive services in the video-streaming space. In investors' minds, Netflix (NASDAQ:NFLX) is chief among those prospective sufferers. Shares of the company still haven't fully recovered from a post-earnings plunge in July -- several months before the Disney+ debut -- after the company said its number of domestic subscribers declined for the first time since 2011. 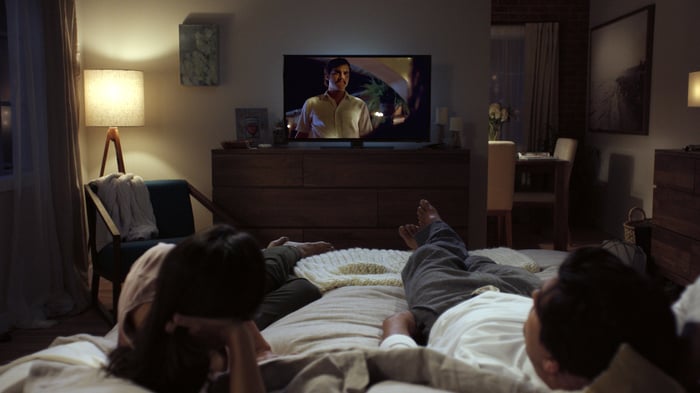 Last week, however, Netflix shares began to rebound in a big way after the company broke down its global subscriber base on a geographic basis for the first time.

More specifically, according to an SEC filing dated Dec. 16, 2019, Netflix's Europe, Middle East and Africa (EMEA) segment ended the third quarter with 47.355 million paid streaming subscribers, good for growth of 40% year over year and up more than 3.1 million sequentially from Q2. In addition, Netflix said each EMEA customer spent an average of $10.40 per month for their memberships, up 6% at constant currencies from the same point a year ago.

Paid subscribers in Netflix's Latin America region also rose 21.8% year over year in Q3, to 29.38 million, including nearly 1.5 million added over the previous three months. Each Latin American account spent roughly $8.63 per month for their memberships, up 17% year over year at constant currency.

But perhaps most impressive -- albeit building on a smaller base -- Netfix's Asia-Pacific geography (which excludes China) saw paid subscribers increase 53.1% year over year to 14.485 million, including 1.54 million added in its most recent quarter alone. Each APAC subscriber spent approximately $9.29 per month, roughly flat from the same point last year.

Meanwhile, Netflix's core United States and Canada (UCAN) segment ended the third quarter with just over 67.1 million subscribers, a more modest increase of 3.6% from the same point a year earlier and up roughly 613,000 sequentially from the end of Q2. It should be no surprise the company earns the most from this more established segment, with monthly dues averaging $13.08 per subscriber, up 17% year over year.

On a consolidated basis, that means Netflix ended last quarter with a whopping 158.3 million subscribers worldwide.

But investors also need to keep in mind this was for the third quarter ended Sept. 30, 2019, a full 1-1/2 months before the House of Mouse unleashed Disney+ in five different countries, including the U.S., Canada, Netherlands, Australia, and New Zealand. And while there's increasing evidence that many new Disney+ subscribers are also hanging on to their respective Netflix accounts, some analysts believe the industry shake-up could mean Netflix loses as many as 1 million U.S. subscribers in the fourth quarter.

Given Netflix's surprising momentum on a global scale, however, I suspect any near-term subscriber losses will prove more a short-term speed bump in its long-term growth story.