2019 was a challenging year for China stock investors. Trade tensions with the U.S. and concerns about the slowing economy tested investors, but in the end Chinese stocks broadly finished higher with the Shanghai Composite up 20.5% so far this year.

Two stocks that were strong performers in particular were Alibaba (NYSE:BABA) and JD.com,(NASDAQ:JD) as you can see from the chart below. 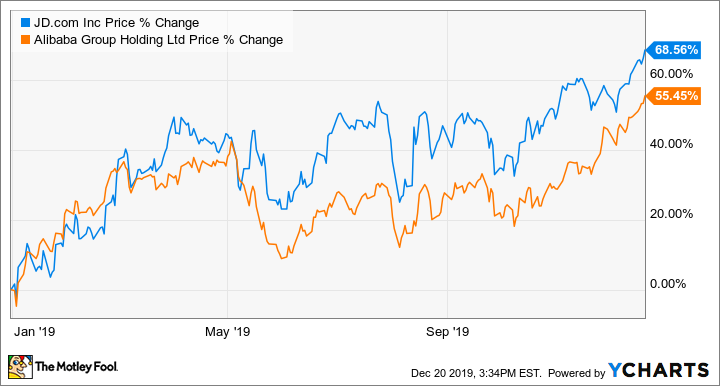 Alibaba and JD bounced back from weak 2018 performances, but China's two largest e-commerce stocks look set for more gains in 2020. Here's why. 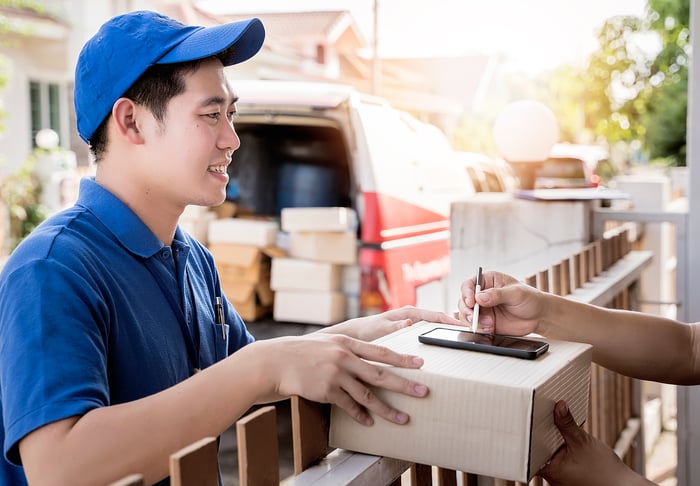 The macro environment is promising

With phase one of a trade deal between the U.S. and China now complete, the worst of the trade tensions between the two countries appear to have passed. With 2020 being an election year in the U.S., President Trump is unlikely to further inflame trade tensions, which could hurt the economy and upset consumers, farmers, and other key constituencies.

Meanwhile, China's economy may be slowing, but with GDP increasing by 6% in the third quarter,  it still represents the greatest engine of economic growth in the world. Chinese consumers continue to spend as retail sales jumped 8% in November, during the key Singles Day holiday.

American brands like Starbucks and Nike continue to see strong growth. At Nike, currency-neutral sales in China jumped 23% in the quarter just ended, showing that Chinese consumers are willing to spend on high-end products. This is a promising sign for Alibaba and JD.com, the country's two biggest e-commerce platforms. Many Chinese companies also reported record Singles Day sales from the Nov. 11 holiday.

Chinese consumers have also been quick to embrace e-commerce, with 35% of total retail sales taking place online and that percentage growing. The rollout of 5G should also make mobile e-commerce even faster and more seamless.

Alibaba and JD both look set to take advantage of the expanding middle class next year, especially the growth in rural areas and lower-tier cities, building on their strong performance in 2019.

In Alibaba's latest quarter, it posted 40% revenue growth to $16.7 billion led by the strong performance of its marketplaces, Taobao and Tmall. At Tmall, gross merchandise volume increased 26% as the site has become popular with luxury brands.   The company's marketplace model has also proven to be highly profitable. In its fiscal second quarter, operating income jumped 51% to $2.85 billion, giving Alibaba an operating margin of 17%.

Beyond e-commerce, Alibaba Cloud continues to grow rapidly with 64% revenue growth in the recent quarter, and it's expanding its reach with its partnership with Starbucks and acquisition of the Cainiao logistics service, among other moves.

JD, meanwhile, seems to have put the fears associated with CEO Richard Liu's 2018 arrest behind it, as it's also seeing impressive growth. The company is building out its logistics and delivery service in rural areas and growing its marketplace while remaining China's biggest direct online seller.

Revenue rose 28.7% in its most recent quarter to $18.9 billion, while higher-margin service revenue jumped 47% to $2.2 billion, a reflection of the company's efforts to develop its marketplace and third-party logistics service. JD saw record adjusted operating margin in the quarter, growing from 0.6% to 2.2% as investments in delivery infrastructure started to pay off, leading to adjusted net income jumping 160%.

The company expanded its one-day delivery capabilities in lower-tier cities, and it can now deliver 90% of its direct sales orders within one day. It also launched its own social commerce platform, tapping into a popular trend demonstrated by Pinduoduo. On the earnings call, management seemed to hint that the company was at a tipping point in profitability, saying that the "snowball" from its investments in logistics and lower cost structure "was just beginning to roll."

Though both Alibaba and JD.com are seeing impressive growth on the top and bottom lines, their stocks look very reasonably priced. On a price-to-earnings basis, Alibaba trades at a ratio of 31.8, while JD.com is priced at 35. That makes these two stocks only modestly more expensive than the average S&P 500 stock at a P/E of 25, and much cheaper than Amazon or another comparable American e-commerce stock.

With trade tensions lifting and Chinese e-commerce booming, both Alibaba and JD should enjoy another year of strong growth in 2020.