When it comes to artisanal coffee houses, the name that immediately comes to mind for most here in the U.S. is Starbucks (NASDAQ:SBUX). The coffee chain, founded in 1971, has a ubiquitous presence in North America and has expanded to almost every corner of the world.

There are not many competitors out there who can openly challenge Starbucks' global dominance, but a new upstart is certainly trying its luck in the nascent Chinese market. Its name is Luckin Coffee (OTC:LKNC.Y) and, considering it was only founded in 2017 in Beijing, it has managed to scale up its presence in that country in a very short timeframe.

Though it's been in operation for just two years, Luckin has grown its total store count in China from just 624 as of June 30, 2018, to 3,680 as of Sept. 30, 2019. That's a stunning fivefold store increase in just 15 months. Those thousands of stores have raised Luckin's average monthly transacting customers nearly ninefold from 1.2 million to 9.3 million over the same 15-month period. It's pretty clear why Luckin Coffee is being labeled as a growth stock. 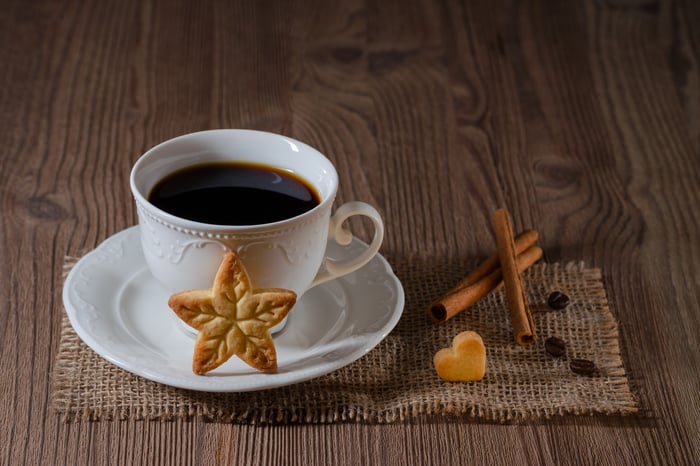 Luckin's IPO price was $17 a share back in May 2019, and it currently trades at roughly double that price. At the same time, the company is burning through massive amounts of cash in an effort to grow quickly and piling up mounting losses as it tries to grab market share. Will this strategy turn out well for investors?

Luckin's gross margin has actually shown a strong uplift for Q3 2019 at 53.2%, compared to 37% for Q3 2018. Overall, for the nine months ended Sept. 30, 2019, gross margin improved significantly to 50.1% from 36.9% in the previous comparable period. According to management's analysis on the conference call, this was due to higher average selling prices of Luckin's items, which resulted in the layer of fixed costs being a smaller proportion of the selling price, lifting gross margin higher.

As the average selling price (ASP) per item for Luckin was just 11.2 Chinese yuan ($1.60), it remains to be seen if the ASP can increase further to provide an additional lift to gross margin. As a comparison, Starbucks' gross margin for FY 2019 stood at 67.8%.

Luckin's store-level operating profit margin has just hit breakeven and stood at 12.5% for Q3 2019. This was due, in part, to the strong increase in the number of transacting customers and a significantly higher number of items sold. As sales increase, store-level economics will improve as the overall revenue exceeds the layer of fixed operating costs. This was an impressive achievement for Luckin, considering its limited operating history.

Luckin also launched Luckin Tea stores nationwide in July 2019, with 28 products in five different categories. The aim is for the group to become China's largest freshly made tea player. This is a fairly ambitious goal, but within 12 months, the percentage of non-coffee items sold has jumped from 31% to around 45%. Luckin has also inked a joint-venture agreement with Louis Dreyfuss Company to introduce Luckin Juice and started serving nuts and branded merchandise such as cups.

For now, it seems too early to reach a conclusion about the effectiveness of this diversification strategy, but early numbers seem to suggest strong uptake for the company's new products.

In order to reduce upfront capital expenditures and maintain an asset-light model, Luckin has introduced its retail-partnership model. This is somewhat similar to a franchise model wherein the partner is in charge of store rental, renovation, staffing, and daily operations while Luckin provides its branding, technology, and products, and assists in the supply chain. There's no initial upfront fee for the partner, and revenue sharing is tiered, effectively encouraging partners to scale up their revenue before any revenue is shared.

Luckin has mentioned that no revenue will be recognized under this model for Q4 2019, and the company will wait for the model to stabilize and produce results before commenting on its effectiveness. The retail partnership model will only be tested on Luckin Tea stores, though. As this is the new growth engine for the company, the adoption of an asset-light approach seems a very good idea to cap runaway expenses.

Though Luckin's total number of stores comes pretty close to Starbucks' number (at 4,125 as of end of September 2019), investors should note that most of Luckin's stores (93%) are actually kiosks or "pick-up stores," rather than the more spacious types of stores where customers can sit back, relax, and enjoy their drinks. This difference is important, as it means that Luckin is competing on an entirely different level, and the direct comparison to Starbucks may not be meaningful.

While the jury is out for now due to Luckin's short operating (and listing) history, the business can turn viable and profitable once the company achieves higher levels of revenue, as this would translate to overall better gross margins and store economics. While it remains to be seen if the company can be profitable on a group level, the "growth-at-all-costs" model seems to hold promise for investors as Luckin continues to report sharp improvements in both financial and operating metrics.