Christmas is over, Kwanzaa is just beginning, Hanukkah is just past its midpoint, and retailers are beginning to take stock of their performance during the holiday season. So far, one of the big takeaways this year is that consumers rushed to e-commerce sites to lock down early and last-minute gifts.

Between Nov. 1 and Christmas Eve, U.S. retail sales climbed 3.4% year over year, according to newly released data compiled by Mastercard (NYSE:MA) SpendingPulse. A breakdown shows that online shopping generated the majority of those gains, as e-commerce sales soared 18.8% during the period, compared to a 1.2% increase at brick-and-mortar stores, according to the report. Digital sales accounted for 14.6% of the total retail sales -- a new all-time high.

One of the biggest beneficiaries of that trend was no doubt Amazon.com (NASDAQ:AMZN), and its stock is up more than 4% on the news that shoppers flocked to its platform in record numbers this holiday season. 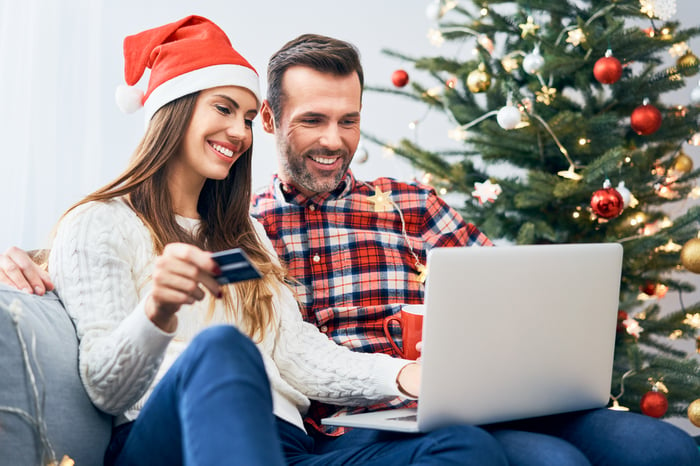 In keeping with years past, Amazon didn't release any meaningful sales metrics, preferring instead to drop broad hints about its record-breaking season. Customers came to Amazon and shopped at "record levels this holiday season," according to a press release. The company revealed that "billions of items" were ordered worldwide.

Amazon said that toys and games, fashion, and home and beauty were the most popular categories, with more than 500 million total items ordered. The grocery segment was another area of keen interest. The number of Amazon Prime customers who tried grocery delivery for the first time this holiday season climbed by more than 80% year over year, and the total number of grocery items more than doubled compared to last year.

Even more importantly for Amazon, it was able to further expand its ecosystem, as in-house products like the Echo Dot, Fire TV Stick with Alexa Voice Remote, and Echo Show 5 were among the "best-selling products" this holiday season. The company said that "millions more" customers purchased Amazon-branded and Alexa-powered products this year compared to last, amounting to tens of millions of devices sold.

Numerous reports have concluded that Prime subscribers are the company's most valuable customers, spending far more than most shoppers. The average Prime customer spends about $1,400 per year, on average. That's 133% more than the $600 per year spent by nonmember customers, according to a survey conducted earlier this year by Consumer Intelligence Research Partners.

Amazon said that more customers tried Prime this year than any previous year. In fact, during one week alone, more than 5 million new customers worldwide started Prime trials or began a paid membership, showing that Prime is still expanding its already massive footprint.

The company hired legions of additional employees to help with the rush, adding more than 250,000 full- and part-time seasonal roles across its global customer fulfillment network. This brought the tally to 750,000 employees worldwide.

Amazon revealed that there were more than 800 Amazon Delivery Service Partners in its last-mile network, with more than 75,000 drivers transporting packages in the U.S. Additionally, the number of one-day or same-day deliveries quadrupled compared to last year.

Amazon has consistently dropped press releases that provide broad strokes of potential investor information without releasing meaningful data, so we'll have to wait until its fourth-quarter report before we know just how well the company did.

It's important to note that while revenue may have seen a meaningful boost, it's also likely that one-day shipping took a toll on the bottom line -- similar to what happened during Amazon's third quarter -- so investors shouldn't get too carried away by the tech giant's post-holiday euphoria. Over the long term, the stock is still a worthwhile investment, but there's likely to be more short-term volatility while Amazon continues its one-day shipping rollout.