When it comes to rivalries, Intel (NASDAQ:INTC) and AMD (NASDAQ:AMD) have a long and storied past. Always playing second fiddle to Intel, AMD was almost put out of business because of the competition over the years.

But things have changed under the charge of CEO Lisa Su . AMD is no longer the scrappy second-place player catering to the low end of the market. It has the products and technology to better compete against Intel here and abroad.

That's been reflected in its stock price this year. Shares are up 110% year-to-date compared to a 21% increase in Intel's shares. It also means it may not be the better buy for now, even if it's chipping away at Intel's semiconductor dominance. Here's why. 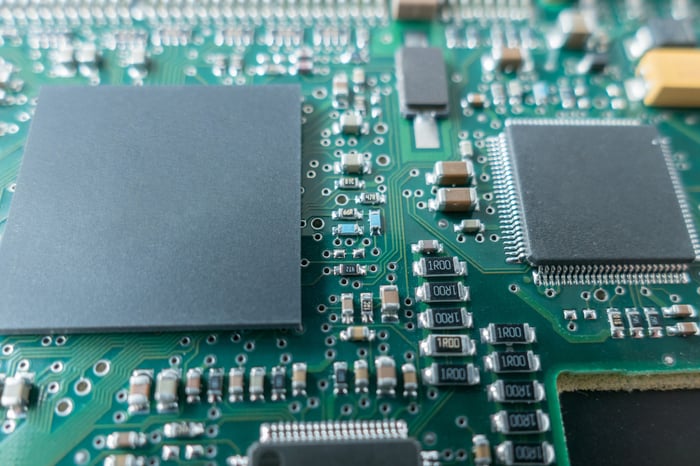 Intel still has the edge

There's no question AMD has been making inroads when it comes to competing against Intel in the PC, server, and data center markets. The chipmaker has been pouring money and resources into its semiconductor products and manufacturing, which has resonated with customers here and internationally.

Take its data center business, for starters. That is a growth opportunity for AMD, which it is competing head-on with Intel in. In the third quarter, AMD was able to post a 36% increase in the unit that includes sales of graphics chips to data centers. It also gained market share on the server and PC front during the third quarter.

That came as Intel's market share in PCs slipped year-over-year.

But AMD has a history of stumbling, which was the case in the third quarter. Despite the double-digit growth in data center chip sales, it missed Wall Street estimates and forecast fourth-quarter sales below views. That sent the stock lower. That tends to happen when a company's share price is trading at a lofty valuation.

With AMD fitting the bill, investors run the risk of steeper sell-offs based on any seemingly negative news. AMD's market share gains are also expected to slow as Intel gets more competitive in the face of its chief rival's increased competitiveness.

Datacenter demand picking up at Intel

Intel is also seeing strong data center demand that's passing through to its future results. When reporting third-quarter earnings, Intel said it expects revenue in the current fourth quarter to come in at $19.2 billion, which is higher than the $18.9 billion Wall Street was looking for. Net income is projected to be $1.28 a share, higher than the $1.16 a share consensus. The upbeat outlook is being driven by demand for chips from data center customers. Not only are they lucrative for Intel, it insulates the chipmaker from the raging trade war between the U.S. and China.

In the gaming market, Intel also appears to have the edge over AMD with its latest chips. That's a big growth driver for both semiconductor companies, given there are more than one billion PC gamers around the world.

Outside of the competition in markets that are growing, the prospects for both stocks in the New Year make Intel the better buy, at least for now. Wall Street currently has a $60 price target on Intel , implying the stock can gain an additional 5%. The price tag on AMD is $36, suggesting shares could decline by 14%.

In order for AMD to prove Wall Street wrong, it will have to kill it on the earnings and revenue front and provide outstanding guidance in terms of growth, since all the good news is already baked in. Barring that, AMD isn't the better buy when it comes to its lifelong rival Intel.