Most Americans (77%) said they expect to return at least some of the gifts they received during the holiday season, according to data from B-Stock Sourcing, an online liquidation marketplace. Roughly $90 billion worth of merchandise will be coming back to retailers (though most of that does not end up back on the shelves of the stores that sold the items in the first place).

"After they hit the return counter, where do the unwanted gifts from retailers like Amazon, Walmart, Target, Costco, Home Depot, Nordstrom, and Macy's end up?" the report said. "Believe it or not, less than 10% of returns actually go back on primary shelves."

In most cases, the returned items end up on secondary business-to-business marketplaces. B-Stock, which handles returns from nine of the top 10 retailers, gets its data from its own work handling returns for its customers. 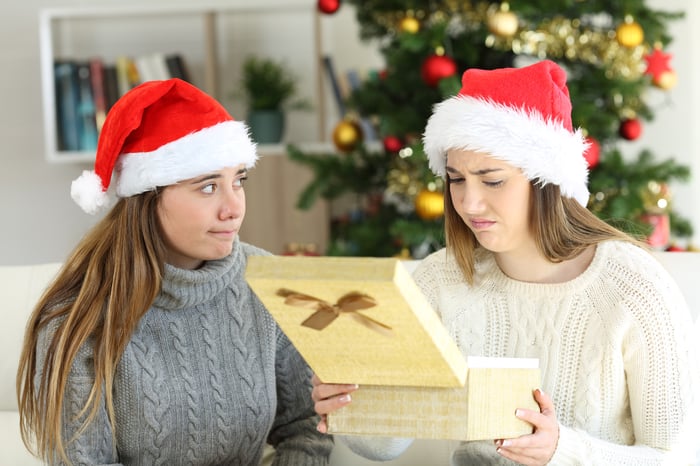 Online sales will account for around 12% to 15% of the total sales made during the holiday shopping season. It's possible that share of overall sales during the just-passed holiday season may inch even higher (as much as 20%?), but it still pales in comparison to the share of overall returns that online sales account for. Digital sales will result in $43 billion of the projected $90 billion in total returns. That's nearly half, and a much higher rate than generated by in-store sales.

This makes sense because, in many cases, gift-givers are sending items they have never seen. That makes it more likely the item won't be exactly what was hoped for, leading to the much higher rate of returns.

The overall number of returns has increased by 25% since 2016 and the dollar amount of online returns has grown by 15% each year. Returns rise by 30% on a dollar-per-dollar basis in the first quarter (the holiday quarter) compared with the rest of the year.

Nobody wants to have to bring something back to the store to exchange it, and online returns require even more effort. Besides, there's a long-term economic incentive: Returns cost retailers money, and that added cost gets passed on to consumers.

If you've already had your share of rejects this holiday season as a gift-giver, there are things you can do next year to improve your success rate. The biggest thing seems to be the one that people generally don't do: Talk to the planned recipient. This may take away some of the surprise, but you don't have to be super-specific about your eventual purchase. Just go over the basics and get a sense of what the person wants. Or talk to someone close to him or her to help get clothing sizes right.

The point of giving gifts is to be thoughtful -- and at least now, you have another 11 months to pay attention to any hints from those on your gift list. Your chosen retailer will appreciate the effort.