New York Community Bancorp (NYSE:NYCB) has had a bit of a rocky year.

In particular, the company's shares fell by about 15% after it released its third-quarter earnings report at the end of October. The sell-off was due to two major issues investors seem to be wary of for the financial institution moving forward (more on that below). Still, the company hasn't performed badly, with its stock up by about 26.1% since the start of the year, which is more or less in line with the performance of the S&P 500 index overall.

Is New York Community Bancorp worth buying today, or would investors be better off avoiding the commercial bank? 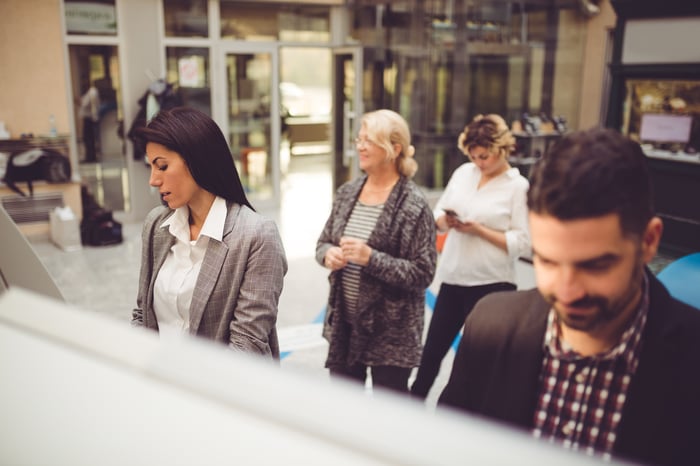 New York Community Bancorp provides deposit products to individuals and businesses, as well as loans -- primarily multifamily loans, which made up 75% of its loan portfolio last year. However, the company is facing increasingly stiff competition across both of these business lines.

First, the company noted in its press release announcing its third-quarter financial results that it had chosen to focus on growing low-cost retail deposits as opposed to large institutional deposits. The reason? During the third quarter, several competitors willing to "pay irrational interest rates" to attract large institutional deposits entered the market, and the company chose to reduce its exposure to this market rather than compete with these newcomers. Second, the company's multifamily loans business is also under pressure: "During the quarter, a number of multi-family loans refinanced away from the Bank because other alternative lenders were willing to provide more credit than we were, which was inconsistent with our rigorous underwriting standards."

What should investors make of these issues? New York Community Bancorp seems confident that focusing on lower-cost deposits will yield tangible benefits. The company went so far as to claim that "the benefit of this strategy should become more apparent in upcoming quarters." Note that for the nine-month period that ended on Sept. 30, New York Community Bancorp's total deposits increased by 4% compared to the year-ago period, in spite of the company's ending its relationships with some of its institutional clients. The company also put a positive spin on the challenges its loan business is facing, noting that on average, its loan balance increased by 5% sequentially, and its loan pipeline increased by 10% compared to the second quarter.

Still, given its large exposure to multifamily loans, losing some of its clients in this segment to alternative lenders doesn't bode well for the company. If this problem persists, it could negatively affect the company's bottom line. It is also worth pointing out that while New York Community Bancorp has historically retained 65% to 80% of its customers refinancing loans, that number dropped to 40% during the third quarter. According to the company's CEO, Joseph Ficalora, this could be due to "the timing of the rent control laws coming into place and some of the new launches of the market." Ficalora went on to say that it is too early to call the decrease in the company's loan retention rate (potentially as a result of rent control laws) a trend, but there seems to be more than enough uncertainty for investors to be worried.

New York Community Bancorp offers a juicy dividend yield of 5.7%. While that may look attractive at first glance, the company's payout ratio is currently a bit high at 89%. Further, New York Community Bancorp hasn't raised its quarterly dividend payouts in more than 10 years, and it doesn't look likely, given its high payout ratio, that the company will significantly raise its dividends anytime soon, much less that it can sustain dividend increases moving forward. For those reasons, the company doesn't exactly qualify as a great dividend stock.

Due to the issues related to its loan business, New York Community Bancorp's outlook is a bit murky, and the company is, in my view, not a buy at the moment. For investors looking for stocks to purchase in the banking sector, there are better options out there at the moment.