Mark Parker had plenty of good news for investors in his last earnings call before transitioning out of the CEO role he's held for the last 14 years at Nike (NYSE:NKE). The company notched accelerating sales gains heading into the holiday shopping season, and growth was especially strong in China, which management has called a crucial market for global results over the next decade.

That second-quarter 2020 conference call was packed with important operating and financial news for investors, and below we'll look at some highlights. 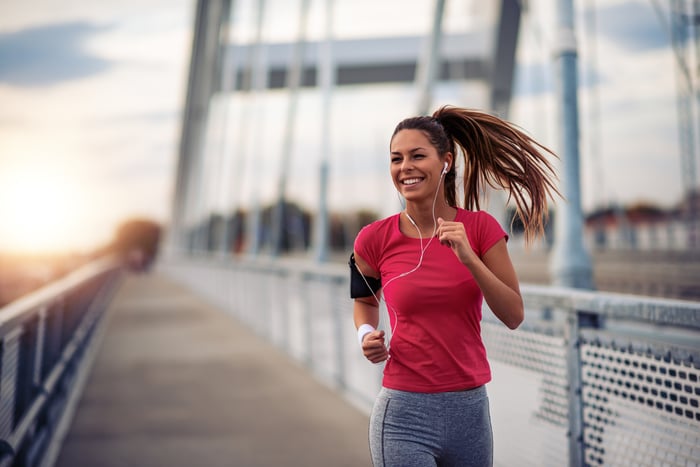 The big takeaways from the last 90 days, where we're proving that innovation is Nike's greatest competitive advantage. The consumer is voting for our brands across the whole portfolio and up and down price points. The passion for sport and active lifestyles is thriving around the world.
-- Parker

Nike's sales growth accelerated to 13%, after accounting for currency exchange shifts, from 10% in the prior quarter. That success was broad based, with an 8% spike in footwear sales helping push revenue higher by 5% in the core U.S. market. In China, which accounted for $1 billion of incremental sales in fiscal 2019, results were even better. Revenue jumped 23% with continued spiking e-commerce demand.

Executives traced most of their outperformance to the parade of hit products that continues to flow through Nike's pipeline, including recent launches in the Jordan and Air Max shoe lineups and around the Zoom running platform. Management even noted strong sales of apparel collections designed to match with hit sneaker products.

Nike has been spending more cash in areas like technology and marketing to press its advantage in the industry. Yet management has also been cutting costs elsewhere, including by boosting efficiencies in manufacturing and its supply chain.

Combined with healthy pricing trends, those successes allowed operating income to jump 25% to $1.25 billion. A lower tax expense translated into a 35% spike in earnings per share.

The good news, according to executives, is that margin increases might have a long way to go as consumers increasingly choose to buy directly from Nike rather than from one of its retailing partners. "We're still in the early innings of our digital transformation," Campion told investors following the company's 38% e-commerce spike.

We expect continued strong underlying product margin expansion, reflecting the strength of our product pipeline. However, that expansion will be largely offset by tariffs in North America and investments in our supply chain.
-- Campion

Nike made a few adjustments to its short-term outlook that, while seemingly negative at a glance, actually point to continued positive momentum through the holiday season. The company affirmed its annual sales forecast rather than raising it. But after accounting for the recently announced sale of the Hurley brand, that amounts to an upgrade as compared with management's predictions earlier in the year.

Expenses and tariff increases should pressure profitability through the holiday season, but the consumer stock still expects to boost gross margin by nearly a full percentage point.

As for bright spots that investors can look forward to over the next few quarters, two of the biggest are the Chinese market and Nike's retailing apps. Initiatives in both areas have powered its global growth over the past year. But management says it is only scratching the surface so far in what it can do in a massive Chinese market, and as shoppers increasingly look to make direct connections with the company.