Online betting outfit DraftKings is going public in a three-way deal that will value the company at $3.3 billion. Because it is one of the primary vehicles driving online and sports betting growth in New Jersey, Pennsylvania, and elsewhere, this could be a stock investors just might want to wager on.

The deal will see DraftKings merge with Diamond Eagle Acquisition (NASDAQ:DEAC), a special purpose acquisition company (SPAC), and SBTech, a B2B technology and trading services provider for gaming companies. After the transaction is complete, the betting platform will be the only vertically integrated U.S.-based sports wagering and online gambling company. 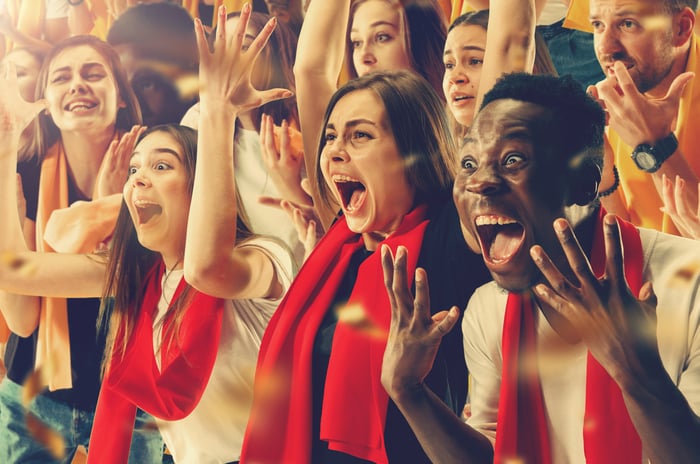 DraftKings began as daily fantasy sports matches, which is where players create online rosters of real athletes to compete in online contests based on how the athletes perform in actual games. Players can win cash and other prizes.

The Fantasy Sports & Gaming Association says some 59 million people play fantasy sports in the U.S. and Canada, spending on average $653 each on league-related costs, games, and materials each year. DraftKings is the leading fantasy sports outfit, with a 60% share of the market across 43 states and in eight international markets.

The advent of online gambling, and in 2018 legal sports wagering, created new opportunities and DraftKings, along with rival FanDuel, is a dominant presence.

New Jersey, as one of the first states to plunge headlong into sports betting, has become the biggest market for such wagers, surpassing Nevada in the year since it was legalized.

There are now 17 sportsbook apps operating in New Jersey, and 10 retail books operating out of Atlantic City casinos and racetracks, with almost $5.3 billion wagered in the state since sports betting launched in June 2018, but DraftKings and FanDuel together control over 80% of the market.

FanDuel has the bigger share, having partnered with The Meadowlands Racetrack, which has generated around $108 million in revenue this year (wagers are how much is bet; revenue is how much the house keeps after winnings are paid out). DraftKings' partner, Resorts Atlantic City, is the second biggest, generating over $70 million in revenue.

Pennsylvania is another state with a fully formed sports betting operation that launched in September 2018. It has taken in over $1.1 billion in wagers and generated $74 million in revenue since the beginning. The state's numbers are smaller in comparison because state gaming regulators consider the promotional dollars a sportsbook spends when calculating revenue, and the state also takes a hefty 34% tax.

DraftKings also has operations in Indiana and West Virginia, and recently New Hampshire selected it as the sole online and retail sportsbook operator for the state.

DraftKings isn't taking a traditional IPO approach. Along with SBTech, it will be acquired by the blank check company, which will change its name to DraftKings, and it will get a new ticker. Jason Robins, who co-founded DraftKings and is its CEO, is going to run the new company, which will be incorporated in Nevada, though it will keep its headquarters in Boston. It will end up with over $500 million in unrestricted cash on the balance sheet when the deal is completed in the first half of 2020.

It's already attracted institutional investor interest, as Capital Research and Management, Wellington Management, and Franklin Templeton have committed some $304 million to the venture.

Sports betting could grow into a $40 billion industry in the U.S., and DraftKings is one of the premier sportsbooks in the country that's already dominating the early states that have legalized it. It had previously tried to merge with FanDuel, but antitrust regulators sued to block the attempt, citing anti-competitive conditions.

Now, as a vertically integrated operation, DraftKings is becoming an IPO that investors should consider making book with to parlay its leadership position into an even bigger player in the industry.