Please ensure Javascript is enabled for purposes of website accessibility
Log In Help Join The Motley Fool
Free Article Join Over 1 Million Premium Members And Get More In-Depth Stock Guidance and Research
By Keith Speights - Dec 29, 2019 at 9:03AM

These stocks have soared 935% or more this year. Can they keep the momentum going?

2019 will go down in history as one of the best years ever for the stock market. Biotech stocks, in general, have performed very well. And some biotech stocks have delivered staggering gains.

Axsome Therapeutics (AXSM 9.66%), Constellation Pharmaceuticals (CNST), and Kodiak Sciences (KOD 2.98%) rank as the best biotech stocks of 2019, with their share prices jumping at least 900% this year. What fueled the remarkable success for these stocks -- and are they buys now? 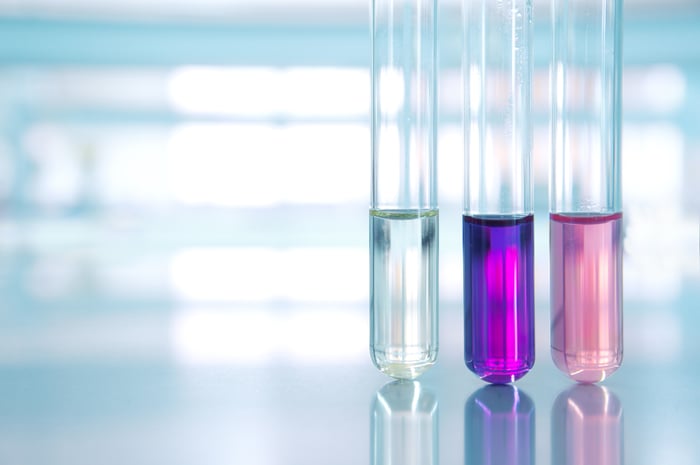 Axsome was awesome in 2019, with its shares skyrocketing over 3,500%. The biotech started off with a bang in early January after announcing promising phase 2 results for depression drug AXS-05 and never looked back.

There were plenty of other positive developments throughout the year for Axsome. In March, the company won FDA Breakthrough Therapy Designation for AXS-05 in treating major depressive disorder. In the following month, the drug achieved the primary endpoint in a phase 2 study for smoking cessation. In December, another experimental drug, AXS-12, achieved its primary endpoint in a phase 2 study targeting narcolepsy. Axsome was added to important indexes through the year as its stock price rose.

The biggest news of all for Axsome, though, came a couple of weeks ago when the biotech announced that AXS-05 met the primary endpoint in a late-stage study for treating major depressive disorder. Even Axsome's stock offering that came on the heels of the major announcement didn't derail the stock's momentum.

Constellation Pharmaceuticals also kicked off 2019 on a good note, jumping 80% in January after the company provided an update on its phase 2 clinical study evaluating experimental drug CPI-0610 in treating myelofibrosis. But that gain was puny compared to the 1,000%-plus surge that Constellation had delivered by late December.

The major catalyst for Constellation was its announcement in November of new data from that phase 2 study of CPI-0610. Constellation's shares soared after the biotech revealed that the new data showed "signs of encouraging clinical activity in both JAK-inhibitor-naive patients and ruxolitinib-refractory or -intolerant patients."

Constellation's clinical study evaluated a combination of its lead drug with Incyte's blockbuster drug Jakafi. If future trials are as successful as the phase 2 study, CPI-0610 could join Jakafi as a leader in the myelofibrosis market.

Kodiak Sciences stock surged 935% this year. While the biotech's shares had more than doubled by the end of September, most of the big gain came in the last six weeks of 2019.

The big story for Kodiak this year centered on its wet age-related macular degeneration drug KSI-301. Kodiak announced positive interim data in July from a phase 1b study of the drug. It reported additional data from the study in subsequent months.

Those results set the stage for Kodiak's royalty deal announced in early December. The stock skyrocketed on the news that Baker Bros. Advisors agreed to pay $225 million for royalty rights to KSI-301.

None of these biotech stocks are good candidates for conservative investors. However, aggressive investors might want to seriously consider all three of these three stocks despite the huge gains achieved in 2019. Each of these biotechs could have potential blockbuster drugs on the way.

Constellation Pharmaceuticals might have the most room to run. Its market cap is roughly half the size of Kodiak's and less than half the level of Axsome's. But Kodiak could also still deliver big gains if KSI-301 performs well in additional clinical testing.

Of the three stocks, though, Axsome is the one I'm most comfortable recommending as a buy. The stock has the least amount of pipeline risk since Axsome has already reported results from a pivotal study of AXS-05 in treating major depressive disorder and plans to file for FDA approval next year. The drug could potentially achieve peak annual sales of around $1.5 billion in the indication plus perhaps another $1 billion in treating Alzheimer's disease agitation if approved.

My hunch is that the biggest biotech winner of 2019 could keep up its winning ways in 2020 and beyond.