The new year represents a chance to hit the reset button for many people. It's a clean slate and an opportunity to do better. That's why so many people start the year off by joining a gym or going on a diet.

The new year also causes many people to take a look at their finances and resolve to make changes or do better. However, financial resolutions, like fitness ones, seem easier to make than to keep. In fact, in 2019, 55% of Americans broke their financial resolutions within three months, while 25% only kept theirs for a single month, according to a new study by MassMutual. 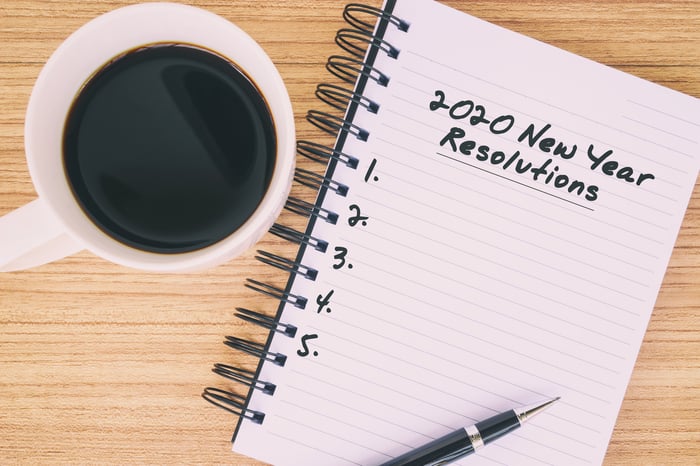 Make resolutions that you have a chance of keeping. Image source: Getty Images.

Making financial resolutions shows that many Americans understand that they need to change their spending and saving practices. As the old NBC public service announcements used to say, knowing is half the battle, and the high level of awareness is a positive sign.

Younger Americans are more willing to go back to the well and try again. That makes sense, because the younger you are, the more time you have to make a major course correction in your finances.

Younger Americans had some clear goals, according to the data. Their top financial resolutions are:

If you resolve to go from not exercising and eating whatever you want to a strict diet and hitting the gym twice a day, you're probably going to lose steam. It's better to make moderate changes and move forward slowly. Maybe you start eating a little better, and go to the gym three times a week.

That's a moderate change that will produce actual results. Those results will encourage you to do more, and eventually you may make a drastic overhaul -- but going from 0 to 100 in one step rarely works.

The same thing applies to finances. Examine your specific problems and make a plan to be a little better. Save a little more money, spend a little less, and put a little more away for retirement.

Start with small changes. Maybe you cut out one day a week where you went out to dinner in favor of eating at home, or perhaps you give up bottled water for a water bottle. Small changes can pile up, and if you do things in increments they hurt less.

Perhaps the most important thing is how you react when you make a mistake. If you stumble, it's important to get back at it rather than giving up for the year. Succeeding in your resolution does not require perfection. Instead, it rakes resolve. You need to be able to fall down and get back up. If you do that, you will eventually succeed.