It has been an extremely challenging fiscal year for the lemon grower, for reasons that were tough to predict.

Citrus agribusiness Limoneira (LMNR -0.73%) plans to release its fiscal fourth-quarter 2019 earnings on Jan. 10, and management is probably more than ready to close the books on the year and look ahead to 2020. In 2019, abundant rains affected the size and market pricing of the company's lemons, dampening quarterly earnings. As a result, Limoneira's stock has traced a volatile and ultimately unrewarding trajectory: While the small-cap bellwether Russell 2000 index has gained nearly 24% in 2019, Limoneira shares have slipped 2% year-to-date. Let's review what investors will need to know before the company's upcoming report.

No (big) surprises in the fourth quarter

On Dec. 18, Limoneira released a business update that included its fourth guidance revision in as many quarters. The company raised its adjusted net loss per share outlook for fiscal 2019, which ended Oct. 31, to the $0.44 to $0.48 range, up from the net loss of $0.12 to $0.22 it had forecast in September.

While the earlier loss projections were primarily the result of rain-impacted harvests, the updated figures were influenced by a number of new factors. These include delayed domestic shipments of lemons due to power outages in California, delayed shipments and lower market pricing for the company's domestic wine grape harvest, and lower-than-expected pricing realized on lemons shipped FOB ("free on board") from Chile.

On the positive side, the update forecasts a 31% increase in full-year  revenue to $170 million. Sales volume has jumped in 2019, though Limoneira has realized lower selling prices for lemons, oranges, and other fruits than it did in fiscal 2018.

Finally, the update advises shareholders to expect 2019 EBITDA (earnings before interest, taxes, depreciation, and amortization) of $2.5 million to $3 million. The company's previously disclosed adjusted EBITDA target has been revised down to $1.5 million to $2 million from the September projection of $7.0 million to $9.5 million.

Limoneira's outlook revisions were compiled after the quarter's end; thus, while the slate of numbers the company reveals on Jan. 10 may be a bit different due to the results of audit procedures, they should closely resemble what the company has told investors to expect. 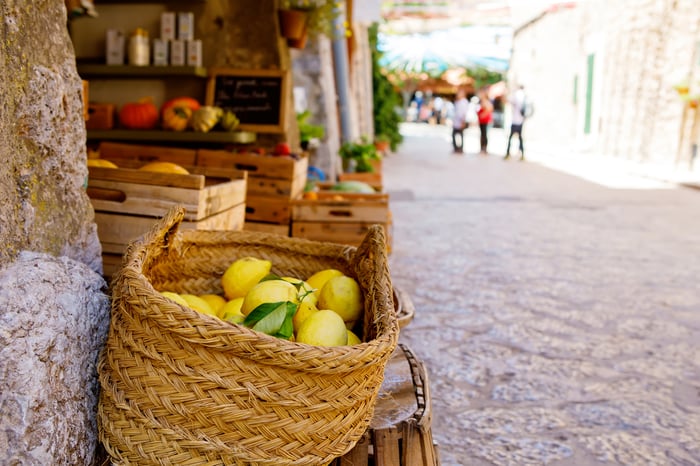 The December document also outlined the company's fiscal 2020 targets, of which there are but two. Management expects adjusted EBITDA of $22 million to $26 million next year, and plans to sell 7.5 million to 9.5 million cartons of lemons globally. Management also disclosed that it will no longer provide EPS guidance. Rather, Limoneira will supply shareholders with these two guideposts.

The company cited rising amortization and depreciation expenses from recent and expected acquisitions as non-cash items that may render EPS less meaningful as a guidance metric. Management also pointed to variables that impact EPS and make it difficult to forecast solid per-share numbers.

Context on the simplified guidance framework

Shareholders will benefit from a little more context surrounding management's decision to limit annual earnings guidance to two metrics, and the topic will likely come up during the earnings conference call. In previous years, Limoneira has encouraged investors to focus on EPS forecasts and adjusted EBITDA in equal measure. Adjusted EBITDA provides a quick gauge of financial progress, as it removes non-cash items from earnings while adjusting for comparability between periods. But EPS projections have been useful for Limoneira's shareholders because they include equity earnings from the Harvest at Limoneira real estate project, and have thus provided a more holistic view of the company's revenue diversity and earnings potential.

This year, however, the new GAAP-required equity investment adjustments, coupled with the irregular nature of real estate earnings, only added noise to a changing earnings forecast beset by weather issues each quarter. Given multiple outlook tweaks, the lack of EPS visibility may have hurt Limoneira's share price as much as the actual impact of heavy rains on earnings this year.

So perhaps shifting to a back-to-basics forecast that only predicts lemon volume and adjusted EBITDA will reduce the guesswork surrounding Limoneira's outlook in fiscal 2020. We'll likely hear more about management's intentions on Jan. 10.