Among large-cap defensive stocks, I can think of few that are better positioned to outgun the S&P 500 in 2020 than consumer stalwart Coca-Cola (NYSE:KO).

Over the last two years, the company's shares have edged the broader index by just 3 percentage points on a total-return basis: 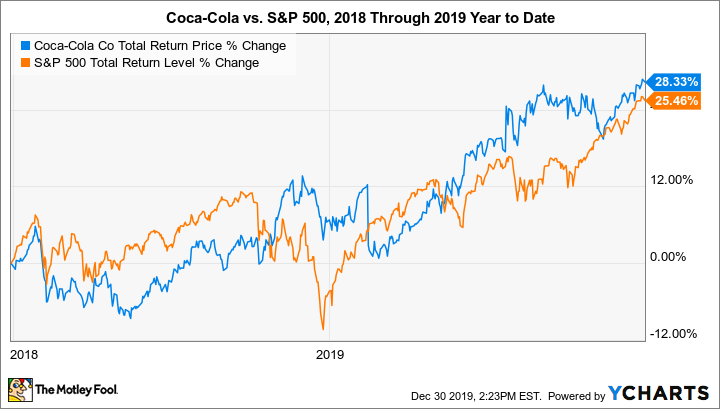 But is Coca-Cola due for greater market attention in the new year? The world's largest producer of nonalcoholic beverages has accelerated its top-line growth meaningfully in 2019: Through the first three quarters of the year, organic revenue increased by 6% over the prior-year period. That's a sterling expansion rate for an entrenched leader in consumer goods.

Coke's recent momentum stems from several initiatives. Most visibly, a shift to low-sugar sodas has stabilized its once-sagging carbonated beverage volume. Coca-Cola Zero Sugar has notched double-digit sales growth in the U.S. this year. That growth, coupled with rising domestic sales of 7.5-ounce cans, helped increase the global retail value of trademark Coke beverages by 6% in the first three reported quarters of 2019.

The company is setting itself up for another year of vibrant sales expansion, with product launches and the planned expansion for several new beverages. The organization is methodically widening its global launch of Coca-Cola Coffee Plus to 20 countries, and it intends to bring Coca-Cola Energy (currently available in 25 countries) to the U.S. in January.

The company will also enter the sparkling water market in force with the March 2020 launch in North America of AHA, a beverage that will compete with PepsiCo's Bubly brand and National Beverage Corporation's dominant LaCroix label.

Coca-Cola's beverage initiatives should support current volume momentum. Investors can expect that in its next earnings report, the company's 2020 outlook will anticipate at least mid-single-digit revenue growth year over year.

Complementing the brisk top-line advance, Coca-Cola's margins have widened in the last two years since it finished refranchising its North American bottling operations in late 2017. By selling its stakes in domestic (and some international) bottling partners, Coca-Cola has achieved a planned capital-light transformation. While it still produces beverage concentrates, a lighter manufacturing footprint has boosted the organization's operating margin by 10 percentage points, to 31%, over the last two years. 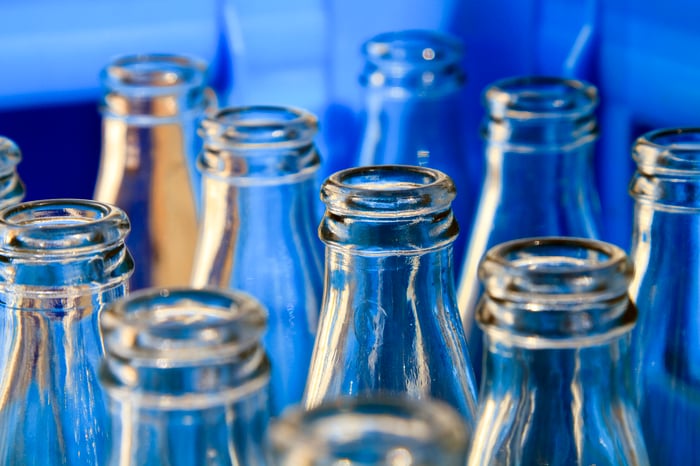 A must-have in a defensive portfolio

While I believe that Coca-Cola will outpace the market in 2020 after two years of running alongside the S&P 500 in total returns, its strengths will become more apparent should the total market retreat over the next 12 months.

Coca-Cola currently trades at a forward P/E of 26.2 -- an 8 percentage point premium over fellow large-cap stocks in the S&P Index, which trade in the aggregate at 18.2 times forward earnings. The company's breadth and distribution prowess in global beverages and its extremely stable cash flows are primary reasons it enjoys a higher pricing multiple versus many other blue-chip stocks.

I expect Coke to maintain its premium to peers in 2020. In other words, if the market slips, Coca-Cola's share price will decline less than the average of fellow S&P members. Should the U.S. economy experience a recession in the coming quarters, its premium may even expand. As a dominant consumer staples multinational, the company is perceived, along with rival PepsiCo, as a naturally defensive stock in turbulent market periods.

If an economic slowdown does catalyze market angst in 2020, Coca-Cola's earnings should suffer less than the typical consumer discretionary large-cap stock. Its sales may actually benefit from people's tendency to purchase low-priced indulgences (think 7.5-ounce cans of Coke) when they're concerned over the economy and are avoiding big-ticket items.

A mix of favorable attributes

Though investors' regard for Coca-Cola is reflected in its forward valuation, the company's improved margins, sterling cash flow, and faster organic growth haven't translated into stock price outperformance as of late. However, the company's perceived safety, and its ability to service a rich dividend that currently yields 2.9%, may rise as valuable attributes in investors' minds during 2020.

On a risk-adjusted basis, there are few large-capitalization stocks that can offer Coca-Cola's mix of share-price stability, accelerating revenue, and operating margin growth. If you're adding defensive positions to your portfolio to mitigate risk in 2020, consider Coca-Cola an essential purchase.