Last year was a monster one for the solar sector. Solar stocks went on a blistering run, with the average one in the Invesco Solar ETF -- an exchange-traded fund that holds more than 20 of the biggest solar stocks -- gaining more than 65% for the year. Because of that, investors won't find too many bargains in the space as 2020 begins.

However, several renewable energy companies that focus on solar weren't quite as hot in 2019. Because of that, they appear to have compelling upside potential for 2020. Leading the way are renewable yieldco Clearway Energy (NYSE:CWEN) (NYSE:CWEN.A), utility Con Edison (NYSE:ED), and solar panel maker First Solar (NASDAQ:FSLR). 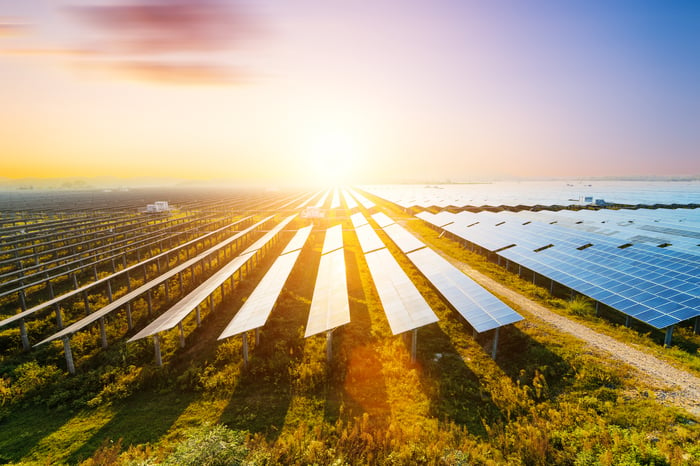 Clearway Energy performed well in 2019, considering how poorly it started the year. The wind and solar power producer's stock gained about 16% while generating a 22% total return after adding in its high-yielding dividend. That was quite a comeback as shares initially cratered after the company slashed its dividend by 40% to start the year due to the bankruptcy of a key customer, California-based utility PG&E (NYSE:PCG).

Clearway, though, used the money it retained by cutting its dividend to shore up its financial position so it could continue acquiring cash-flow-producing renewable energy assets. Because of that, the company is on track to grow its cash flow by another 18% in 2020. Add that growth to the company's now 4%-yielding dividend, and it could produce another 20%-plus total return in 2020, especially if PG&E settles its bankruptcy claims without renegotiating its power purchase agreements with Clearway.

New York City-focused utility Con Edison isn't likely on the radars of most solar investors. However, the company has quietly become the second-largest solar power producer in its peer group through its clean energy business. That business mainly sells power to other utilities and end users, including PG&E, which currently purchases 26% of its renewable energy output.

Con Edison expects to continue growing its solar business, with it aiming to invest another $400 million in clean energy projects in both 2020 and 2021. Those investments in renewables, along with spending to expand its core utility operations, should enable Con Edison to continue growing its earnings and dividend. The company has an amazing track record of increasing its shareholder payout, which currently yields 3.3%. That above-average yield, when combined with its visible growth prospects, makes Con Edison a lower-risk way to invest in solar.

First Solar's stock soared more than 30% in 2019. However, shares were up nearly 60% until it posted disappointing third-quarter results. However, that was due mainly to timing as the company expects to achieve its full-year forecast, which would see its earnings soar more than 80% at the mid-point of its forecast. Powering that growth is the company's Series 6 module, which is selling at a brisk pace. First Solar already sold out its entire 2019 production capacity of 5.5 GWs. Meanwhile, it has booked enough sales to sell out all of 2020's projected capacity of 6.7 GWs. Because of that, the company's revenue and earnings should continue growing at a fast pace in the coming year.

That will enable First Solar to add to its already impressive cash pile, which is on track to end 2019 between $1.7 billion and $1.9 billion. With a limited need for those funds, First Solar could begin returning this cash to its shareholders in 2020 through a dividend or share repurchase program. That combination of growth and potential of a cash return makes First Solar a compelling stock to buy this year since it could continue its rapid rise.

The future for solar remains bright

The adoption of solar energy has been on the rise in recent years due to falling costs not only for panels but also for energy storage. Because of that, the sector should continue expanding at a fast past in the coming years. That makes it a segment investors will want to have in their portfolios. While there are several compelling options, Clearway Energy, Con Edison, and First Solar stand out as the top ones for the coming year due to their visible upsides and lower risk profiles.