Facebook (NASDAQ:FB) failed to impress in more than one way during 2019. The company's Portal devices didn't seem to gain any meaningful traction with consumers, and a virtual currency (Libra) that Facebook announced in June quickly lost support from key partners including Visa, Mastercard, PayPal, Stripe, eBay, and MercadoLibre. Adding to negative headlines for the social network in 2019, Facebook CEO Mark Zuckerberg was berated during a question-and-answer session with federal lawmakers over the company's Libra project.

Nevertheless, Facebook stock surged in 2019. Investors couldn't help but look past these challenges and see an underlying business that continued to fire on all cylinders.

Here are six metrics highlighting what was behind Facebook stock's 54% gain in 2019. 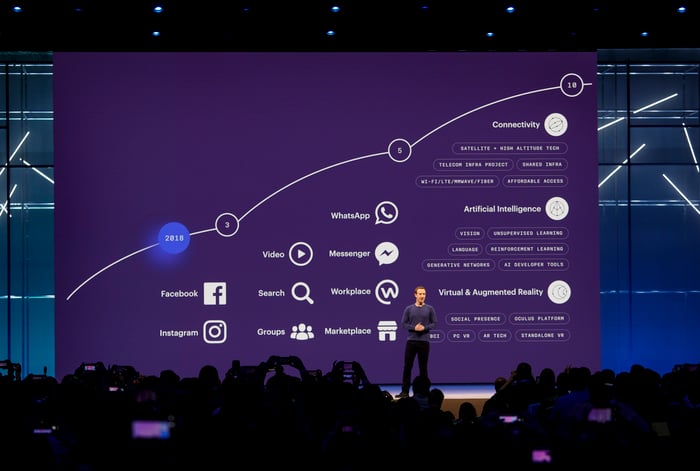 One of the most important metrics for Facebook investors to keep an eye on is the number of users that are active on Facebook on a daily basis. An active user base means advertisers get access to an engaged audience, drawing in more advertisers and increasing the value of ad units on the platform.

By the end of Facebook's most recently reported quarter (Q3 of 2019), daily active users were 1.62 billion -- up 9% year over year. Importantly, this growth rate is in line with the 9% growth Facebook saw in daily active users in 2018. The company's core platform, therefore, continues to demonstrate a knack for attracting new users and bolstering engagement.

A key metric that Facebook started reporting in the fourth quarter of 2018 was its de-duplicated monthly active users across all of its apps, including Facebook, Instagram, Messenger, and WhatsApp. This figure, which the tech company refers to as its "family" metric represents Facebook's best estimate of unique users across all of these apps.

Between the fourth quarter of 2018 and the third quarter of 2019, this figure increased from 2.7 billion to 2.8 billion. Over this same time frame, daily family users rose from about 2 billion to 2.2 billion, capturing how well Facebook is engaging its user base.

4. Total advertisers on the platform increased by 1 million

With a nice uptick in users, advertisers, and ARPU, it's no surprise that Facebook's revenue grew nicely in 2019. Total trailing-12-month revenue rose 29% year over year to $66.5 billion.

Of course, the downside of such a sharp increase in Facebook's stock price in 2019 is that shares aren't as attractive as they were one year ago. The stock now has a price-to-earnings multiple of 33 -- up from about 20 at the beginning of the year.

But that doesn't mean investors should file away Facebook stock as one that is overvalued. Earnings are expected to grow rapidly in 2020. Indeed, the company only trades at 22 times analysts' consensus earnings estimates for the next 12 months.