If you're considering investing in the gene editing sector, it's worth taking some time to look through all the main players in this small but promising biotech market. At the moment, there are just a few noteworthy companies in this space, all of them still at early clinical stages despite commanding market valuations well into the billions of dollars.

CRISPR Therapeutics (NASDAQ:CRSP) is likely the first gene editing stock to come to mind, and it's considered by many to be the leading company in the market, if only by market cap. However, smaller companies, like Sangamo Therapeutics (NASDAQ:SGMO), also have plenty of promise.

If you're wondering which of these two stocks is the better buy, then read below to find out all the details. 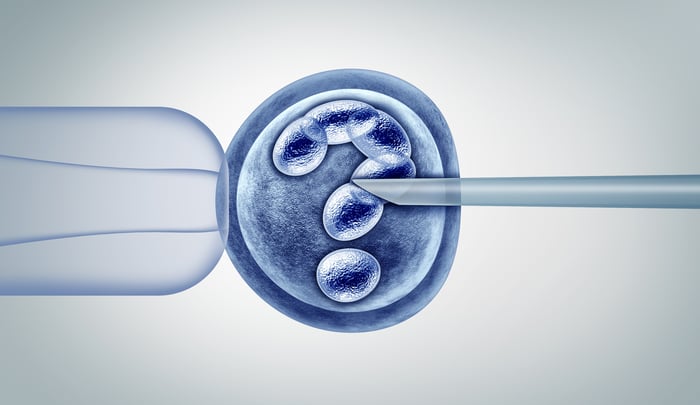 While different gene editing companies target their own specific conditions, investors will notice that many tend to coalesce around the area of blood disorders. Both CRISPR and Sangamo are working on drug candidates that target sickle cell disease and transfusion-dependent beta thalassemia (TDT), which are disorders that hinder the ability of hemoglobin to carry oxygen around the body.

CRISPR is working on CTX001, which has been used to treat two different patients, one with sickle cell disease and the other with beta thalassemia. Both patients have shown a complete reversal of all key symptoms, with more patients now undergoing CTX001 treatment.

Unlike CTX001, Sangamo has two separate drug candidates, each targeting only one of the blood disorders mentioned above. ST-400 is Sangamo's beta thalassemia drug, while BIVV003 is its sickle cell candidate. Both are being developed alongside Sanofi, which has partnered with Sangamo to develop these drugs.

While BIVV003 is still undergoing early clinical testing, with investors still waiting to see the preliminary results, ST-400 has proven to be an early success so far. Sangamo released data in early December regarding the first three patients treated with ST-400 for TDT, with all of them showing encouraging results with few side effects. Further results are expected to come out in 2020.

Sangamo has a pretty diverse portfolio of drug candidates that are either in preclinical or clinical stages of development, totaling 15 separate projects in comparison to CRISPR's nine. Five of those are in early phase 1/2 trials. Besides Sangamo's sickle cell and beta thalassemia treatments, Sangamo is working on treatments for Fabry disease, Hemophilia A, and Hunter syndrome (also known as mucopolysaccharidosis type 2 or MPS II).

The Hemophilia A treatment, SB-525, showed strong results in its phase 1/2 study earlier this year. Patients with this blood disorder, who experience a lack of a key blood-clotting factor, showed significant improvements in levels of this clotting factor after taking SB-525.

Even patients with severe cases of hemophilia A, which is extremely hard to treat, showed impressive improvements in the levels of this clotting factor. Pfizer, which is partnered with Sangamo to develop SB-525, is now moving toward a new phase 3 trial, which is expected to begin sometime in 2020.

Sangamo's Fabry treatment, ST-920, is still undergoing its own early-stage clinical trials, with little information available at present. The only setback for Sangamo has been in its MPS II drug, SB-913, which ended up failing to significantly help patients with the rare genetic disorder. While the company hasn't given up on SB-913 yet, it's definitely the weak link in an otherwise strong drug portfolio.

CRISPR's drug portfolio is a bit narrower, with only two drugs in clinical testing in comparison to Sangamo's five. Besides the previously mentioned CTX001, CRISPR has a fairly strong cancer immunology lineup. CTX110, CTX120, and CTX130 are its selection of immunology candidates, although CTX110 is the only one in clinical testing at the moment.

Cancer immunology is a massive market that's estimated to reach $127 billion by 2026, and a home run in this area would be a major win for CRISPR. CTX110 is a CAR-T (chimeric antigen receptor T-cell) therapy, a type of treatment in which immune cells are extracted from a patient, retrained outside the body, and later reintroduced into the patient's system in hopes they will perform better. While it's not the only CAR-T therapy being developed, CRISPR's treatment could prove to be much cheaper than current treatments, which cost hundreds of thousands of dollars for a single patient.

CRISPR has had a strong fiscal third quarter, reporting $138.4 million in net income on revenues of $211.9 million. But in 2019, CRISPR has so far only reported $36.3 million in net income, as the earlier quarters reported losses. While it's nice that CRISPR is reporting a profit, something very few early-stage biotech companies can boast, it's still a very small figure considering CRISPR's $3.9 billion market cap.

Sangamo's financials look a lot different. Besides being a fraction of CRISPR's size with a market cap of $970 million, Sangamo's Q3 2019 revenues came in at $21.9 million, while reporting a net loss of $27.4 million for the quarter. However, the company has an impressive $408.3 million in cash and equivalents, enough to last for around four years at the current rate of expenses.

In terms of traditional valuation metrics, it's hard to evaluate clinical-stage biotech stocks by looking at ratios, as their financial figures can change dramatically if a drug candidate receives approval. Currently, CRISPR trades at 16.7 its price to sales (P/S) ratio, but in July, the company was trading at an astronomical 1,800 P/S ratio, meaning that investors were willing to pay extraordinarily high amounts for what little revenue it was making that quarter. In comparison, Sangamo is more moderately priced, with a 12.2 P/S ratio.

Both companies are compelling investments if you're looking for exposure to the gene editing sector. While Sangamo has a broader pipeline of projects, I still think CRISPR is the better choice if you had to pick just one of these companies. CRISPR has not only shown positive clinical results for CTX001 and CTX110, but is also reporting a profit for this most recent quarter, which is pretty rare for early-stage biotech stocks. Meanwhile, Sangamo isn't expected to turn a profit anytime soon.

However, gene-editing drugs are still at an early stage of clinical development, and plenty of things can change over the coming years. Both CRISPR and Sangamo are promising investments for someone who's comfortable buying into early-stage biotech stocks.