A decade is an eternity in the technology industry, and over the past 10 years Facebook has grown from a private start-up to one of the largest and most valuable publicly traded companies in the world. Most significantly, Facebook successfully pivoted from desktop to mobile shortly after it went public in 2012. Mobile platforms represented just 3% of ad revenue in mid-2012, but now represent 94% of that core business.

Looking back over the past decade, Facebook had the top four most-downloaded apps, according to a recent report from mobile analytics specialist App Annie. 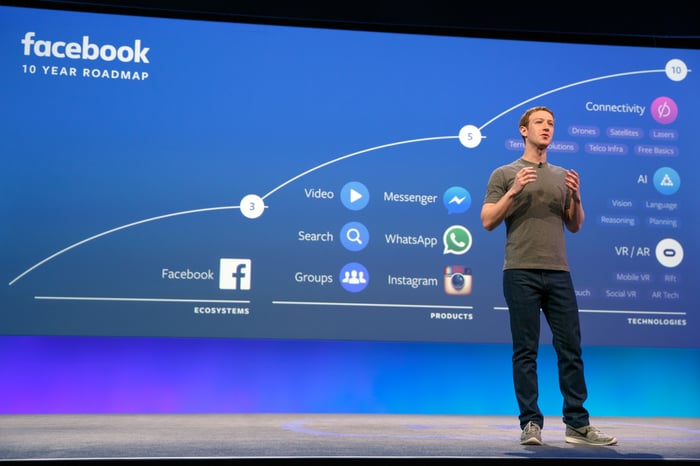 Here are the top 10 apps by all-time downloads from 2010 through 2019, according to App Annie. These top four apps are what Facebook now refers to as its core "Family of services."

After acquiring Instagram in 2012, Facebook has done an incredible job in growing the service into the powerhouse photo- and video-sharing platform it is today. Instagram is now in the process of adding e-commerce functionalities like integrated checkouts, a natural extension since the visual nature of the platform lends itself effectively to ads. In comparison, WhatsApp was much larger when Facebook acquired it in 2014. The mobile messaging app had already accumulated 450 million monthly active users (MAUs) by then, many of whom were located in emerging markets.

Nowadays, both Instagram and WhatsApp have over a billion MAUs each, and Facebook's Family of services collectively has 2.8 billion MAUs.

App Annie's rankings also underscore the competition that Facebook is seeking to destroy. The social networking leader has replicated many of Snapchat's most popular features, most notably the Stories format that is now ubiquitous on social media. After a year of struggles in 2018, Snap has started to meaningfully grow its user base again thanks in large part to an overhauled Android version of Snapchat.

The fact that China-based ByteDance's TikTok was able to rank No. 7 is a testament to that short-form video platform's astronomical growth since it's a relative newcomer to the scene. TikTok launched internationally in 2017, merged with Musical.ly in 2018, and emerged as one of the most popular social media apps in 2019. In that short time, TikTok has grown to an estimated 1.5 billion users, rivaling Facebook's own dominance. Zuckerberg is simultaneously dismissing TikTok's competitive threat while copying its features.