Party City's (NYSE:PRTY) deflation run in 2019 began when it told investors that a helium shortage hurt earnings and it reported dismal results for Halloween, its biggest holiday. Then, in November, the company said that sales at its Halloween City stores slid more than 20% year over year and Party City shares sank 67% in one trading session. Stock in the company is finishing the year down roughly 80% from highs in late February.

The manufacturer and seller of party goods said it's recovered from the helium shortage and is optimistic for the new year -- including next Halloween. That leaves the question: Are the steps the company is taking enough to boost business (and share prices) or is the party over for Party City? 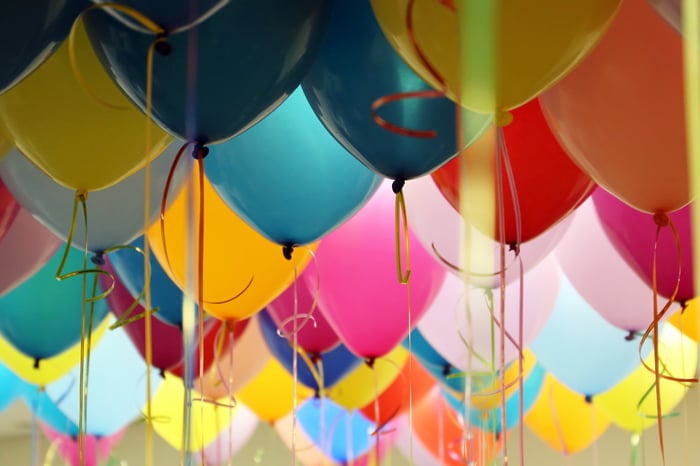 A wholesale leader in party supplies

Let's start with the company's strengths. Party City is a leader in the wholesale market, selling products to competitors like Amazon, and its goods can be found at a total of 40,000 retailers worldwide. The company makes about a third of its profits from these wholesale customers. This means Party City doesn't rely uniquely on customers coming into its shops or buying on its website for revenue. Party City also manufactures 25% of its products and aims to increase that to 50%. That is another positive because it gives the company more control over costs. However, if Party City doesn't want to become a wholesale-only business, it must boost its in-store and e-commerce sales.

Certain factors (like this year's helium shortage) are beyond Party City's control, yet work on other areas that the company can control may mitigate the pressure on earnings. Areas for improvement include e-commerce, attention to product and communication, and debt reduction.

Party City said that orders made online and picked up in stores represented 40% of October demand on the company's e-commerce site, a sign that customers seek a smooth and seamless in-store and online experience. But reviews for Party City shops on sites like Yelp show they might not be getting it. The trend in negative comments about both in-store pickup and customer service at certain locations mean these are areas the company should address. Without offering full details, Party City said in its latest earnings call that it plans to make in-store pickup easier and will better integrate the store and online experiences. President and CEO Brad Weston said, "We are listening more closely and intently to what our customers are telling us."

In addition to listening, the company also plans on communicating. Noting a trend in millennials mixing and matching party wear, Party City said it has items that are perfect for that audience but admits it has to do a better job of getting that message across. In other efforts, Party City promises to streamline product assortments after realizing that a glut of products only overwhelms the shopper. For instance, of the 32 solid-color tableware selections, 15 generate 90% of the revenue in that category. The company also launched a free party planning service in some of its stores and is integrating that with an online component.

As for finances, Party City announced earlier in the year that debt reduction would be a priority and recently said it would lower its debt to $1.5 billion from $2 billion. The company said it's working to reduce inventory and payables to reach that goal. In October, Party City used the $101 million in proceeds from the sale of its Canadian business to pay down debt, and this effort should be appreciated by investors.

That said, the timeline has lengthened. In the second-quarter earnings call, Party City spoke of lowering debt to about four times adjusted EBITDA by year-end; due to lowered EBITDA guidance, Party City will still lower debt by the same dollar amount but now aims to reach the "four times" level by the end of the next financial year. In the third quarter, the company cut its adjusted EBITDA forecast for the year to the range of $300 million to $310 million from its earlier guidance of $355 million to $370 million.

Things are definitely happening at Party City, and the company is taking steps to strengthen its business and financial health. But it's too early to say whether the steps will make a difference for earnings and share price. Investors may have to wait until next Halloween to see if Party City's efforts can indeed make this company, and its shares, something worth celebrating.