Domestic utility giant The Southern Company (NYSE:SO) is doing something that no other U.S. utility is doing -- it's building a nuclear reactor. In fact, not just one. It is constructing two reactors at its Vogtle power plant in Georgia. It hasn't been an easy process, with delays, cost overruns, and the bankruptcy of its original contractor (Westinghouse). Now in full control of the project, though, Southern appears to have things largely back on track. But there is still a lot of work to be done, and key hurdles left to jump.

CEO Thomas Fanning recently outlined his three biggest concerns. Here they are, and why they are so important to watch.

Southern has laid out a set of key milestones for investors to watch to see how the company is progressing along the path to completing its nuclear projects. On the surface it looks pretty simple, almost like a list of items to check off. But a nuclear power plant is a highly complex thing, and the simple timeline approach, while easy to visualize, doesn't do justice to the actual on-the-ground construction process. 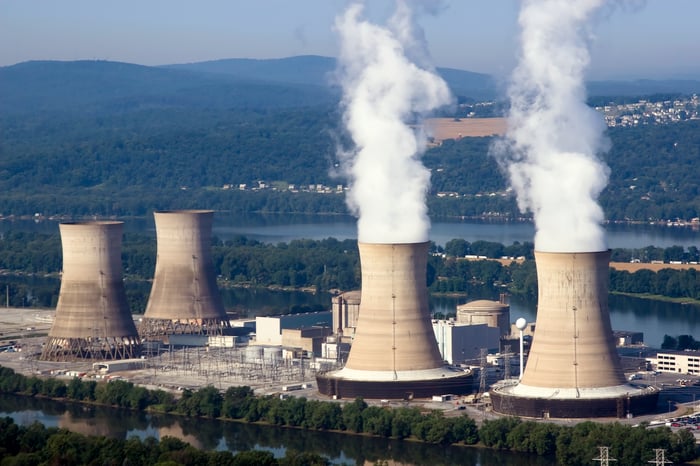 This isn't as easy as "complete task one and move on to task two" -- a lot of things are being worked on all at once. And there's a complicated web of interdependence. If something is delayed in one place, it could end up delaying things in another. From a big-picture perspective, Southern recently started and completed the initial energization of the first nuclear power plant it is building (known as Unit 3), meaning it basically plugged the plant into a permanent power source like plugging a light into a wall socket.

There are miles and miles of electric cables in the plant. If the plant didn't "turn on" as expected, Southern would have had to figure out why. That would delay other steps, like testing the main control room. It's simple, really: If the power isn't functioning properly, you can't test the reliability of the control room. It's a domino effect, to some degree. There are other things that could continue, but if Southern doesn't hit certain milestones it won't get the project done on time and on budget.

It obviously takes a lot of highly skilled workers to build a nuclear power plant. And those employees need to put in a lot of effort along the road to completion. However, it isn't as simple as "hire lots of people and set them free on the site." Southern has to figure out what needs to be done and when so it can properly staff. Adding complexity to the issue, some of the work is being done in tight spaces. You can't put ten people into a location that can only fit two at a time. So staffing and logistics play vital roles in keeping productivity high.

So far Southern has done a pretty good job. One of the key metrics management uses to track progress here is "earned hours." Put simply, that's how much time employees spent on the project. The goal is to get to 160,000 earned hours, which it was able to achieve in October. It has been a slow ramp up to that level, but it hasn't been a smooth ride.

Earlier in the project's life, Southern was actually having some trouble attracting employees, an issue complicated by the high employment levels the U.S. is currently enjoying. The company has been creative, though. For example, it has used less skilled laborers to do things like pull wires, while leaving more skilled tasks, like connecting the wires, to licensed electricians. It has also been splitting the work across two shifts (day and night), so it can get more work done in less time. However, it's worth noting that Southern recently had to dip into a reserve fund, partially because it needed to boost pay to attract the workers it needed.

So the news is good here, overall, but Fanning still has reason to be worried. If the company can't reach its productivity goals, the entire process slows down. And that would lead to delays. 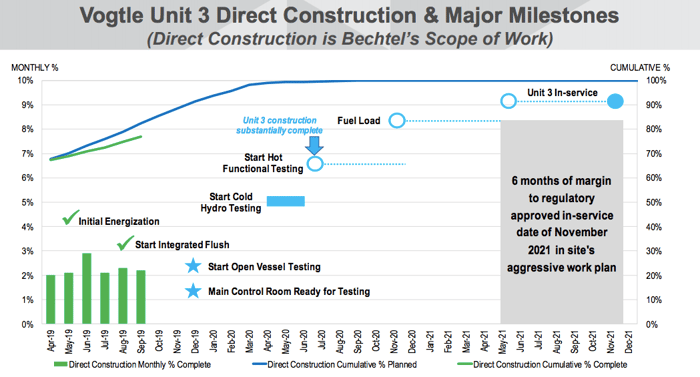 Fanning's last concern is a bit more nebulous: fuel load. This is basically the point where Southern puts nuclear fuel into the reactor. This is essentially the final step before a nuclear power plant starts working for real and on its own. There's more testing that needs to be done before the reactor starts sending power to the electrical grid, but it is really the culminating process. If everything goes well, the nuclear plant should be, essentially, "done" by this point in the process. Everything else, simplistically speaking, is just final touches.

If everything before this point doesn't go according to plan, Southern can't begin the fuel load. One problem somewhere along the line could lead to a delay. You can argue that this concern is simply a function of the other two points Fanning laid out, which is true to some extent. But it's a bit bigger than that, because everything can go according to plan -- and something might still go wrong.

For example, there was a problem with a pump at a Chinese facility using the same nuclear technology as Southern (something that couldn't have been predicted ahead of time). Southern has had people in China watching the construction process so it can apply what it learns to its own build. But sometimes things break. And since this is a nuclear power plant, you can't just keep rolling along -- you need to stop and examine what happened, learn why it happened, and fix it. If the problem is big enough, it could delay the completion of the entire project.

Essentially, Fanning's concern here is very big picture. Everything in this highly complex project has to come together all at once. Adding to the anxiety here is the fact that the Vogtle project is already over budget and delayed. In fact, to keep the project alive, Southern has basically agreed to take on the bulk of the financial risk of any future delays or cost overruns. So successfully getting to the fuel load is a pretty big issue.

With the fuel load at Vogtle 3 set to happen in late 2020, Southern's CEO is sure to have a few restless nights ahead of him this year. The next 12 months or so will be vitally important in the process of getting the first of Southern's two nuclear reactors up and running. If you are a shareholder, Fanning has basically laid out the key things he is paying attention to. Although everything appears to be going relatively well right now, you should probably be paying attention to these things, too. And keep in mind that once Vogtle 3 is complete, Southern still has to get Vogtle 4 done on time and on budget.