Himax Technologies (NASDAQ:HIMX) is a fabless semiconductor solutions provider. The company is a worldwide market leader in display driver ICs (integrated circuits) and timing controllers used in a variety of electronic equipment such as TVs, laptops, monitors, and mobile phones.

Himax reported disappointing third-quarter earnings with revenue down 12.8% year over year and a loss attributable to shareholders of $7.2 million, reversing a net profit of $0.9 million during the same period last year. Gross margin also contracted from 23.4% to 19.5% as the company reported waning demand in industries that use consumer display panels. 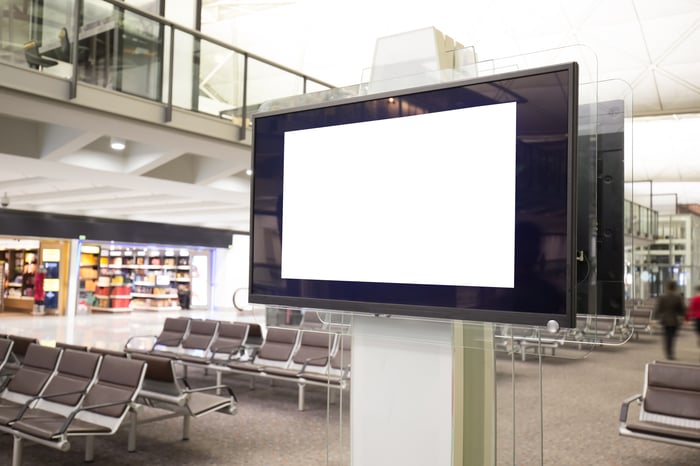 Himax stock tumbled 22% in 2019 and is now trading close to five-year lows. It seems the company's troubles are piling up and dragging on. However, Himax is a global market leader in timing controller ICs and has a three-decade track record of working with reputable original equipment manufacturers. Amid high levels of pessimism and depressed valuations, could Himax turn out to be a good small-cap stock to purchase for the long term?

From the graph below showing Himax's five-year financial performance, we can see that the numbers have been deteriorating for quite some time. This does not seem to be an isolated or temporary case of trouble for the company, even though management alluded to only a temporary gross margin compression. While revenue has been hovering around the $600 million to $750 million mark, gross profit has been under pressure, falling below the $200 million level in the last four consecutive years. 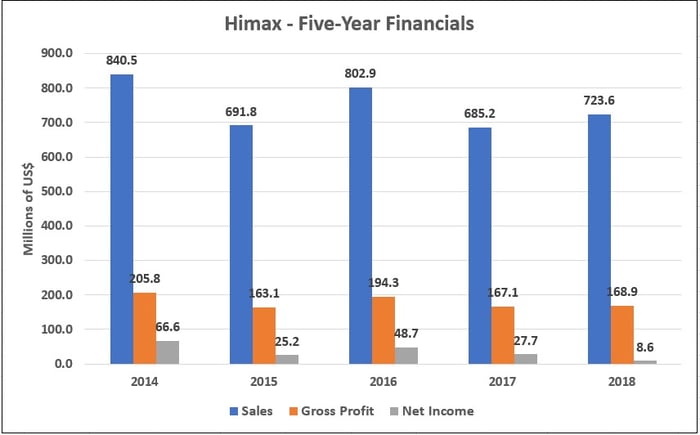 However, the most telling sign of trouble is Himax's bottom line, which has steadily fallen from a high of $66.6 million back in 2014 to just $8.6 million in 2018. For the first nine months of 2019, Himax incurred a significant operating loss of $17.0 million and a net loss of $14.7 million, meaning full-year 2019 results will likely be deep in the red.

Himax runs a capital-intensive business and spends a significant sum on capital expenditures each year. For 2017 and 2018, this spending amounted to $39.3 million and $49.7 million, respectively. Operating cash flow was healthy at $29.4 million for 2017 but plunged to just $4 million in 2018 (in line with the plunge in net income). As a result, free cash flow turned sharply negative at $45.7 million for 2018. For the first nine months of 2019, operating cash flow was also negative, yet capital needs remained high, resulting in total cash burn of $59 million.

This lack of free cash flow generation is a worrying sign for any business and is a huge red flag for Himax.

Himax is in an industry that faces rapid technology change. Therefore, technological obsolescence is a frequent challenge for the company, which has to continually innovate or fall behind its competitors. Working with leading brands also means having to fulfill stringent requirements, and such brands have the clout in negotiations to squeeze their suppliers for better pricing or more customization.

The proliferation of competition in an overcrowded LCD market also demonstrates the ease of entry for players offering a commoditized product. Overcapacity means that Himax has little -- if any -- pricing power and is at the mercy of its customers.

The company has provided weak guidance and has limited visibility on how things will pan out. Importantly, Himax does not expect the business environment to improve in the near term and sees waning demand in all industries that use consumer LCDs. A bright spot will be for the touch and display driver integration (TDDI) division for smartphones, where the company anticipates a strong rebound in the first quarter 2020, but even this might not lift earnings materially for next year.

Cheap for a good reason

As you can see, Himax is trading at depressed levels for good reason. Himax's industry structure and the nature of the business make it an unattractive investment for the long term. If investors wish to ride on the technology trend and own a stock in this space, Taiwan Semiconductor Manufacturing Company might be a better choice. The company has been a beneficiary of the 5G build-out and has posted sterling numbers, while its share price has also hit multi-year highs.