GW Pharmaceuticals (NASDAQ:GWPH) paved the way for modulating the cannabinoid pathway and turning that field of science into valuable prescription therapeutics. Over the past five years, GW transitioned from a promising idea to a commercial reality with two approved drugs in the U.S. and Europe. 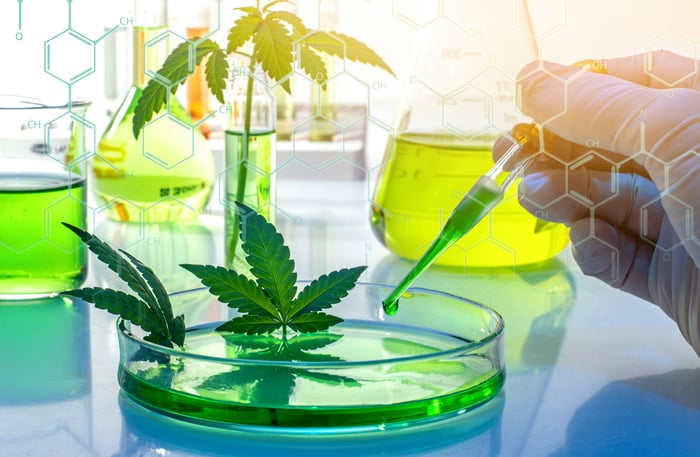 Epidiolex, GW's first drug to attain U.S. Food and Drug Administration (FDA) approval, launched into the market in November 2018 as a treatment for two rare forms of childhood-onset epilepsy. It also marked the FDA's first approval of a cannabis-derived drug.

GW touted Epidiolex's successful launch in a September 2019 presentation, highlighting that more than 2,500 physicians wrote Epidiolex prescriptions for over 12,000 patients. Revenues exceeded $188 million in the first nine months of 2019.

European regulators approved the drug last September under the name Epidyolex. The initial launch in Germany and France began shortly thereafter. In December, the U.K.'s National Institute for Health Care and Excellence granted a favorable recommendation for routine reimbursement of Epidyolex and GW's Sativex, a drug for the treatment of spasticity due to multiple sclerosis. This paves the way for the U.K. launch. GW plans to expand into Italy and Spain this year.

GW sees a need for therapy for roughly one-third of epilepsy patients with seizures who do not respond to existing anti-epileptic drugs. Several distinct and rare syndromes fall into that basket. Epidiolex's initial approval treats patients aged two and older who experience seizures associated with Lennox-Gastaut syndrome and Dravet syndrome.

The commercial prospects of Epidiolex remain a near-term priority. While watching that, investors will keep a keen eye on the uptake across Europe following the September approval. Additionally, Sativex, which is sold in 25 countries by GW's marketing partners, will enter pivotal trials for approval in the U.S.

It's always tough to tell. Here is why it is challenging for a big pharma company to buy GW. Marijuana and cannabis remain illegal in the U.S. at the federal level. Until that changes, pharma companies don't want to be perceived as possibly being on the wrong side of the law. The PR battle may be a greater stumbling block than the science or products.

Let's look to history for an example. Thalidomide was a drug initially marketed for morning sickness, anxiety, and sleeping problems. What followed was an outbreak of birth defects and early deaths of babies whose mothers took thalidomide. Later the drug was shown to be effective in treating multiple myeloma, graft-versus-host disease, and skin diseases, including leprosy.

A little biotech company called Celgene acquired the drug and gained approval for use in cancer, where it went on to be very successful. In the early 2000s, Celgene, with a market cap under $100 million, tried to sell itself unsuccessfully. No big pharma would take on the PR nightmare that would come from acquiring a drug that caused thousands of birth defects. Faced with that reality, Celgene used thalidomide as its foundation and ultimately grew until Bristol-Myers Squibb acquired the company last year for $74 billion.

As with Celgene in the early days, I do not see pharma companies stepping in to buy GW unless the laws change. A specialty pharma in the central nervous system (CNS) field, like Denmark-based Lundbeck, could be a possible acquirer. If GW's Board felt it needed a sizable merger to bolster its prospects, then perhaps CNS-focused biotechs like Acadia Pharmaceuticals (NASDAQ:ACAD), Neurocrine Biosciences (NASDAQ:NBIX), or Sage Therapeutics (NASDAQ:SAGE) could fit the bill.

GW to maintain its leadership position

Investor interest in marijuana stocks has surged in recent years. Alongside the traditional consumer/retail business, several of these outfits intend to pursue a pharmaceutical approach. The extensive requirements to properly develop a drug will likely overwhelm many of these companies, causing them to seek a strategic pharmaceutical partner. GW's proven track record should give it a coveted position to fill that void. GW has been expanding its internal corporate and business development teams to achieve this.

I predict that five years from now, GW will remain independent. Epidiolex marketed indications will increase. Sativex and a third product, possibly the CBDV program, will also be approved. GW will be a leading CNS company and the "partner-of-choice" in the cannabinoid space with a growing pipeline built through acquisitions and licensing transactions with emerging cannabis companies.

Where will the stock be in five years?

No one knows. If the business flourishes, then the stock should appreciate to reflect its progress. Investors should take comfort that Epidiolex, in its first fully year on the market, will exceed $200 million in sales, and that does not reflect its recent European approval. The stock currently trades at roughly a 45% discount to last year's highs of $187 per share. While not cheap at $102 per share, the stock can increase dramatically as seen in last year's performance, making it attractive for biotech investors willing to accept the risks.