Puma Biotechnology (NASDAQ:PBYI) used to be a pretty compelling investment for many biotech investors out there. Its only drug, Nerlynx (also known as neratinib), targets a significant portion of the breast cancer patient population and definitely has the potential to be a lucrative drug. However, the company seems to have taken a major turn for the worse over the past year.

While bad news has sent share prices falling by around two-thirds in the past 12 months, some investors think that the company is now a cheap buy, especially since it still boasts significant revenue figures for its meager $325 million market cap.

Let's take a closer look at whether you should consider buying into Puma, or if you should stay clear of this stock. 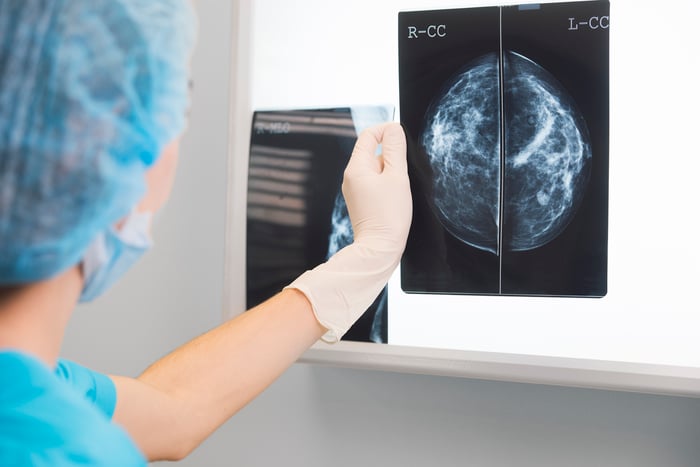 What's going on with Nerlynx?

Puma's only drug, Nerlynx, received Food and Drug Administration (FDA) approval back in 2017 to be used as an adjuvant (extended post-surgery) therapy in patients who have early stage HER2-positive breast cancer. More specifically, Nerlynx is a pan-HER inhibitor, which means it fights HER2-positive breast cancer cells by preventing them from receiving growth signals.

However, it turns out that an alarming number of patients who are prescribed Nerlynx quit the treatment within the first month due to the drug's side effects. Nerlynx, which is an oral daily medication, has long been known to cause severe diarrhea in many patients, with Puma going so far as to provide vouchers to patients for anti-diarrheal medications. However, Puma's management went on to say in a conference call that many patients discontinued the drug due to the severity of their symptoms.

Nerlynx is also relatively expensive for doctors to prescribe, costing over $10,000 per month while providing only a modest increase in survival chances for the small group of patients who have early stage HER2-positive breast cancer.

The story gets worse for Nerlynx when one looks at another biotech stock, Seattle Genetics (NASDAQ:SGEN), which is developing a drug candidate that would target a similar group of patients. Tucatinib is a tyrosine kinase inhibitor (TKI) which inhibits specific enzymes called tyrosine kinases involved in protein activation. More specifically, Tucatinib targets HER2, a growth factor present in many cancer patients, including those with breast cancer.

While it's not specifically a breast cancer treatment, analysts on Wall Street suspect that Tucatinib could siphon market share away from Nerlynx. This is especially possible considering that Tucatinib seems to be better tolerated among patients than Nerlynx, although diarrhea is still present for some patients, according to the latest trial results.

Back in October, Goldman Sachs analyst Paul Choi downgraded Puma to "sell" for precisely for this reason and cut his price target down from $24 to just $8 per share. He went on to say that Seattle Genetics' Tucatinib "is underappreciated and creates a challenging set up. We believe that even if Tucatinib is not differentiated on efficacy, it may garner more market share on greater tolerability," something that may very well prove to be the case.

While Nerlynx seems to have a fair number of problems going for it, Puma Biotechnology -- from a purely financial perspective -- might seem a little undervalued to some investors. Even after cutting back on its year-end guidance multiple times this year, Nerlynx sales for 2019 are expected to be around $210 million. Coupled with royalty and license revenues, which are roughly around $60 million, Puma's total revenue for the year would be around $270 million.

Considering that Puma's market cap is just $325 million, that's quite cheap. In terms of its price-to-sales (P/S) ratio, Puma trades at just 1.15 times its sales, whereas in January 2019 it was trading at 4.7 times sales. Although the company is still reporting quarterly losses, with its most recent third quarter seeing a $16.9 million loss, Puma's $58.9 million in cash is enough to last it almost a year at its current rate of expenditure.

Is Puma Biotechnology a good deal?

To Puma's credit, the company is addressing its discontinuation problem with some new strategies. Besides increasing the number of patients who start on lower doses, Puma has seen some encouraging results in trying to co-prescribe a novel combo of antidiarrheal medications alongside Nerlynx. Although it's quite possible that sales in 2020 will increase, Nerlynx's potential as a blockbuster $1 billion-plus revenue drug don't seem realistic anymore.

Despite its bargain-bin valuation, I don't think that's enough to recommend this stock to anybody. Puma Biotechnology has lost almost 95% of its market valuation over the past two years and trying to catch a falling knife is always a big risk. When you take into consideration potential competition from Seattle Genetics, Puma's core business can easily fall apart if a superior competitor drug emerges onto the scene. This is one biotech stock that investors should keep their distance from.