Last year saw a number of initial public offerings (IPO) catch the public's attention, although many of them have underperformed since going public. While major tech unicorns were catching most of the media spotlight, there were a few biotech stocks making big waves as well. One of them was Shockwave Medical (NASDAQ:SWAV), a medical device maker for doctors treating patients with artery disease.

While shares of the company have more than doubled over a two-month period after going public in March, the stock has since given back most of its gains. While Shockwave's revenue growth has been impressive, some investors wonder whether the company's $1.3 billion valuation is a bit excessive. Let's take a look at this promising biotech stock and whether it's worth a spot in your portfolio. 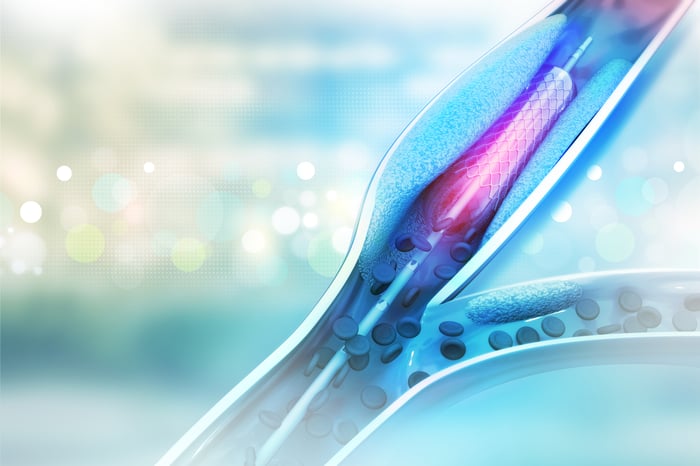 What's the big deal about Shockwave?

Shockwave Medical caught investors' attention when it went public in March 2019. The company's claim to fame is its intravascular lithotripsy (IVL) technology, which offers a higher-tech solution to current angioplasty procedures used by doctors today.

Patients with artery disease and significant plaque buildup can choose to undergo angioplasty, a treatment in which a small balloon is inserted into a nearly clogged artery and then inflated to flatten out the blockage before inserting a metal mesh tube known as a stent. The problem with this, however, is that arteries can be damaged, especially if they've become hardened and calcified.

The difference with Shockwave's IVL technology, however, is that instead of trying to scrape away the hardened plaque, the catheter emits ultrasonic waves to break down the buildup. Unlike traditional angioplasty, IVL technology is much safer, able to break down and crack calcium deposits without risking arterial damage. The same technology has been used in removing kidney stones for 30 years and would supposedly be easy for medical professionals to integrate into their existing angioplasty treatment protocol.

However, this new technology won't eliminate the need for traditional angioplasty and stenting. Instead, it's more of a supplemental technology that would make regular angioplasties much safer and less likely to cause complications, saving money for the hospital in the process.

The market for arterial disease

Arterial disease -- also referred to as atherosclerosis -- can be classified as either Peripheral Artery Disease (PAD), where arteries in the limbs become clogged due to plaque buildup, and Coronary Artery Disease (CAD), which is a more serious condition where the coronary arteries become blocked. The latter often leads to heart attacks, while the former can cause severe blockages in the limbs.

Around 8.5 million people in America over the age of 40 have PAD, while 16.5 million Americans have CAD to some extent. According to Shockwave Medical's investor presentation, both markets would provide the company with a total addressable market of over $6 billion, which suggests a significant upside, considering the company's relatively meager $12.3 million 2018 revenue.

As of September, Shockwave Medical's C2 Coronary IVL catheter received a Breakthrough Device designation from the Food and Drug Administration (FDA). This means that the company will receive priority review from the FDA and allows a line of communication with the agency during the product's pre-review phase. These types of designations are a good sign for the company, as they make it more likely the C2 catheter will be expedited for approval.

However, Shockwave still expects that final clinical data for a U.S. product launch won't be available until early 2021, with a full launch possibly not taking place until 2022. While that's still quite a ways away, Shockwave could finally see a major increase in revenue in the upcoming years, should all go well.

Is the valuation justified?

While everything mentioned above paints a promising picture for Shockwave in the future, the real question investors need to ask is whether they're paying a good price for the stock. In this regard, it does seem like investors are paying a hefty premium to buy a stake in this company.

Shockwave currently commands a $1.35 billion market valuation. However, its revenue figures are much smaller, with its recent third quarter showing only $11.3 million in income. While still a 215% increase from Q3 2018 before the company went public, Shockwave's year-end guidance comes in around $41 million.

It's also worth mentioning that ShockWave is still operating at a loss. The company reported $13 million in net losses for its third quarter, a figure which has stayed relatively the same compared to Q3 2018's $10.2 million net loss. While the company still has $114.1 million in cash, enough to last it a little over two years at its current rate of expenditure, it still has quite a way to go before it begins turning a profit.

Is Shockwave Medical a buy?

While Shockwave has a strong product that addresses a significant need in the healthcare market, its IVL technology is still years away from getting approved by the FDA. Although revenue is growing, it's also far from being profitable. That's not necessarily a deal-breaker, however, as many fast-growing companies report losses at their early stages before turning a profit down the road.

If you're thinking about buying and holding Shockwave for the long term, then I'd suggest waiting for the stock to tumble some more. Considering how volatile shares have been since going public, it wouldn't be surprising for them to fall even more over the next few months. Even at already discounted prices compared to previous highs in June, Shockwave seems a little overpriced for how little revenue it's generating. Wait a bit for a dip before you consider buying Shockwave.