The market for smart speakers is largely dominated by tech giants that are willing to sell products at incredibly aggressive prices. Smaller players collectively represented just 12.5% of the market in the third quarter, according to recent estimates from Canalys. That would include Sonos (NASDAQ:SONO), the premium audio specialist that went public in 2018. The company is now suing Alphabet (NASDAQ:GOOG) (NASDAQ:GOOGL) subsidiary Google, alleging that the search giant has infringed on its intellectual property (IP) and abused its market power. 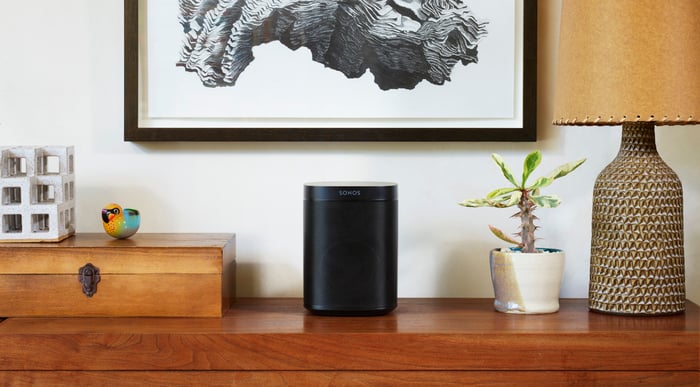 Fighting one tech giant at a time

Sonos was an early pioneer of wireless multiroom audio technology, which allows customers to wirelessly connect numerous speakers throughout a home to play music. Sonos argues that Google acquired knowledge around Sonos' patented multiroom audio tech in 2013, when the two companies partnered in order to integrate Sonos speakers with Google Play Music.

Sonos says it has notified Google of patent infringement on at least four separate occasions since 2016. The company alleges that Google "has also subsidized the prices of its patent-infringing products, including at the entry level, and flooded the market."

The meteoric rise of smart speakers controlled by virtual assistants has put Sonos in a difficult position. It has no virtual assistant of its own, and in order to take advantage of booming consumer demand, it has integrated its platform with both Google Assistant and Amazon.com's (NASDAQ:AMZN) Alexa.

Sonos also believes that Amazon is infringing on its IP but does not want to simultaneously wage legal battles with two juggernauts, according to The New York Times. Amazon maintains that its multiroom audio tech, which was introduced in 2017, was developed independently. That suggests Sonos could potentially sue Amazon later on.

As a pure-play speaker maker, Sonos can't compete as aggressively on price. Amazon and Google both have much larger businesses that smart speakers feed into, and have no compunction eating modest losses per unit in order to secure market share. Sonos CEO Patrick Spence is expressing willingness to testify to lawmakers that are scrutinizing big tech companies over antitrust concerns.

Sonos is seeking "enhanced damages" since it alleges that Google's infringement "was and continues to be willful and deliberate." The company says it has suffered market share losses as a result of Google's actions. Sonos reported in November that fiscal 2019 product unit volumes jumped 21% to 6.1 million, leading to an 11% increase in revenue. Fiscal 2020 revenue is expected to grow by 8% to 11%.

Those figures might sound healthy enough, but keep in mind that the smart speaker market saw unit volumes skyrocket 45% in the third quarter, and it's starting to shift toward smart displays -- a category where Sonos does not have a product yet.