Shares of online food delivery platform Grubhub (NYSE:GRUB) popped today, rising by 12% as of 2:45 p.m. EST, after The Wall Street Journal reported that the company is exploring a sale. The news comes as competition from Uber and privately held DoorDash intensifies.

Grubhub has hired financial advisers to explore strategic options that could potentially include selling itself, according to the Journal report. Management is also reportedly concerned about how to deal with an activist investor, should one accumulate a meaningful stake and start agitating for changes in an effort to boost shareholder value. It's still early in the process, and nothing may materialize from the talks. 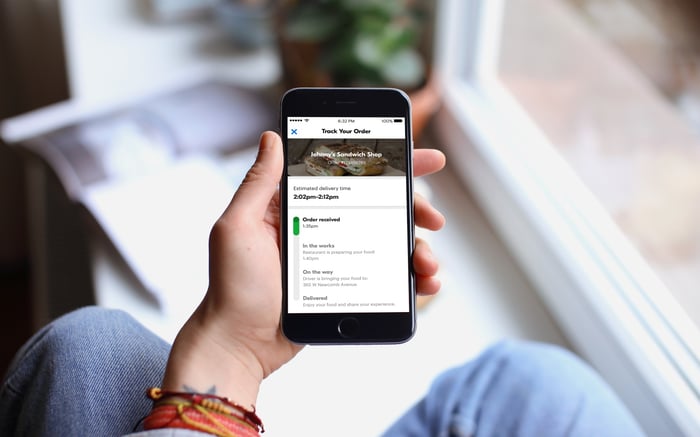 The food delivery industry has seen consolidation in recent years, with Grubhub itself merging with Seamless in 2013 and later acquiring other food ordering tech platforms such as Eat24 and Foodler. The food delivery sector relies heavily on promotional spending, and competitors have been leaning on generous incentives to attract customers. DoorDash overtook Grubhub as the No. 1 player in U.S. online food delivery last year.

The company recently saw its shares tank after reporting disappointing third-quarter results, which included Grubhub cutting its guidance for the fourth quarter. It had previously expected 2019 revenue in the range of $1.34 billion to $1.39 billion, but said order growth recently started "trending noticeably lower than our expectations." Fourth-quarter revenue is now expected to be $315 million to $335 million, which would bring full-year sales to $1.29 billion to $1.31 billion.

Grubhub has not yet scheduled its fourth-quarter earnings release, but investors can expect the company to provide 2020 guidance at that time.