Shares of Snap (NYSE:SNAP) climbed 196.4% in 2019, according to data provided by S&P Global Market Intelligence.

From its initial public offering in 2017 through 2018, the stock had been in a steady decline, which likely had more to do with Snap's rich valuation than anything else. Revenue has skyrocketed over the last few years, but the company has yet to report a profit.

Snap has made progress in marching toward breakeven with a steady narrowing of its net losses in recent quarters. Investors seemed to take note of that improvement and sent the shares higher in 2019. 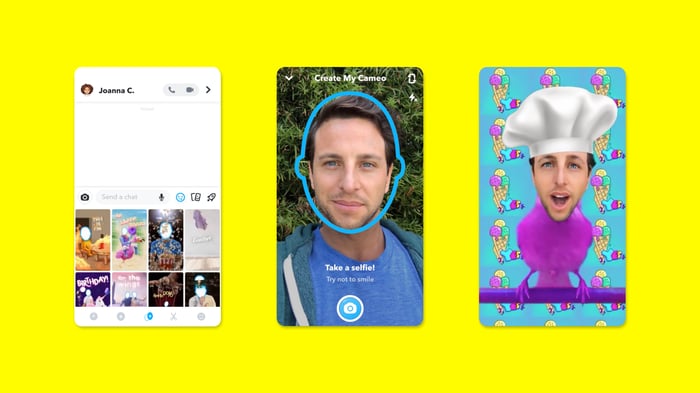 Screenshots of the Cameos feature in Snapchat. Image source: Snap.

Management credited the redesign of the Snapchat app on Android for improving the company's performance over the last year. Snap has momentum heading into 2020, which should translate to its first profitable year since going public.

Snap continues to invest across several areas, including the Discover platform, developer tools for partners (Snap Kit), augmented reality, and Snap Games. Snap has also made improvements to its ads business with Dynamic Ads, which automates the process of creating ads for businesses.

Fourth-quarter guidance calls for revenue to be up 41% year over year at the midpoint of the range of $540 million to $560 million. Adjusted EBITDA is expected to be between breakeven and $20 million.

Looking further ahead, analysts expect revenue growth to slow to 35% in 2020, while adjusted earnings are expected to be slightly above breakeven at $0.02 per share.